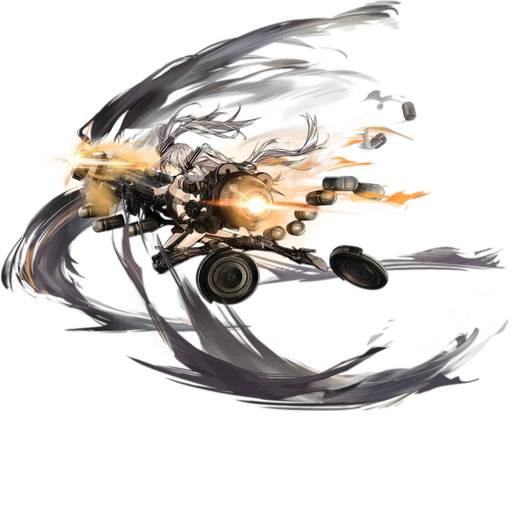 SF's AoE specialist. Her skillset is simple: Shit explodes. Because explosions ignore armor, she does well vs clustered enemies, whether or not they're armored. What matters is if they're clustered together and don't move fast enough to get out of her attack range and smack her face before she can fire. Because of how explosions work, with each link tanking damage from a blast, she has immense firepower vs. anything with more than one link.

Pairs well with Manticores and Nemeums. You can argue Jaguars too, but YMMV.

Do note that she also has a use as a dragging unit if you use her via friend echelon due to her HOC mode.

Her big cut-in kaboom. OK, so you remember the big thing she does when you fight her, with the easily avoidable huge explosion? Yeah, this is the one. Just like with you, enemies can walk past it if they're fast enough. Honestly, if there aren't many enemies, it's actually lower DPS than just letting her fire. However, it comes into its own when you need to deal with tight clusters. Also it actually has infinite range. It's one of those "have it set to manual cast" sort of skills.

She turns into a HOC. Actually, it's not bad, being a HOC that basically ignores armor (it's actually 400 penetration but nothing we know of right now has that much armor). Unlike normal HOCs, it cannot strip distortion barriers at all. It's not a good primary use, and she fires very slowly compared to even normal HOCs, so it's good for supplemental damage at best. It also uses up her ammo. However, borrowing a friend's is good because friend echelons have infinite ammo, so yes, it's possible to just let her kill things for you for free that way if your echelon is tanky enough.

...Does what it says on the tin. Makes her stuff go boomier. Attack speed reduction goes down as you level it.

Works with her skill 3. You know how she reloads every 12 shots? The first shell of every fresh belt of Grenades has reduced firepower, but sets the ground on fire like a Molotov. Level it to make it deal more damage and last longer.