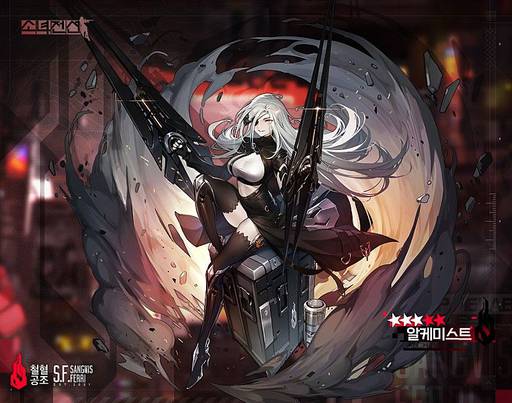 Kind of a meme. A melee unit who, unlike executioner, is actually good at it. Basically, she has infinite shield that keeps stacking as long as she attacks. Most bosses are not meant to fight this sort of thing, so she basically can destroy Yegor with no player input outside of telling her to go attack him. She isn't invincible or invulnerable, and is particularly vulnerable to burst damage enemies (Hydras come to mind, or SWAP Jaegers), but basic enemy fire wont even phase her.

Another issue is that friendly SF aren't invulnerable to stun, and some enemies can stun her. When that happens, she goes down pretty hard because she can't replenish her defenses. Otherwise, her overwhelming defensive ability lets you faceroll most encounters.

Big flashy attack that, like her normal version, makes her invulnerable while she's doing it. Also marks enemies with a weirdo mark that makes her gain shields by hitting them. In defense mode, she shoots with her pistols instead of melee-ing. Between this, the shields, and her evasion, she spends a lot of time being very hard to kill.

Crits give the funny mark that makes her gain shield. This skill's active effect also buffs her stats. This includes a +100% buff to her Eva stat, which is huge on a skill with four seconds of downtime.

Her bread and butter that makes her so bullshit on the attack. Every time she attacks a target with the mark produced by her other skills, she gains up to six points of shield, which stacks. And she attacks VERY fast. Also, makes the enemy take extra damage, but that's just a bonus.

In defense mode, Gives 6% of her HP as a shield, regenerating every second. If enemies cannot breach this amount, she's basically unkillable. It also lasts up to five seconds after defense mode is turned off. In other modes, it makes her go ZOOOM towards the enemy with a short move speed boost. Yes, she's tanky as fuck and lets you faceroll huge chunks of the game.