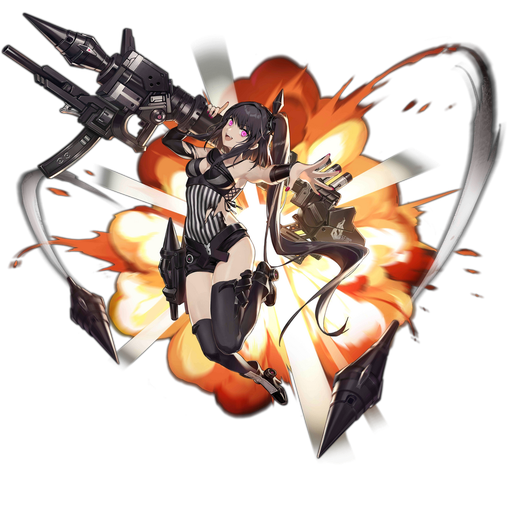 If we had to capture her, who the fuck have we had in our holding cell all this time?

Anyway, she's an alright boss whose big thing is being a HOC that can defend itself. Unlike Destroyer, she can actually break distortion barriers, and she lets you do it without needing to capture a Heavy Helipad. Not the best choice compared to an ATW, but better than nothing and she's actually usable at the role.

She also has decent buffs for units that use explosives, but isn't really your first choice as a normal front-line combatant ringleader.

Normal AoE explosion cut-in skill. It is, however, not an instant attack, and the enemy can move while it's active, so it can miss fast movers. It is a chunky attack though, so you'll notice when it hits.

The original skill name was funnier. Anyway, it's her HOC skill. Level this one if you want to use her that way.

Bonus DPS. Not much more to say.

Because of the weird way the calculation works, this doesn't actually help anyone besides Architect, because it's weird and additive. It technically increases the damage of Golyats and such, but the way it's done means it's just a 1% increase in power at max level. It does boost Architect's own explosives at least, but you can put this on the back burner until later.