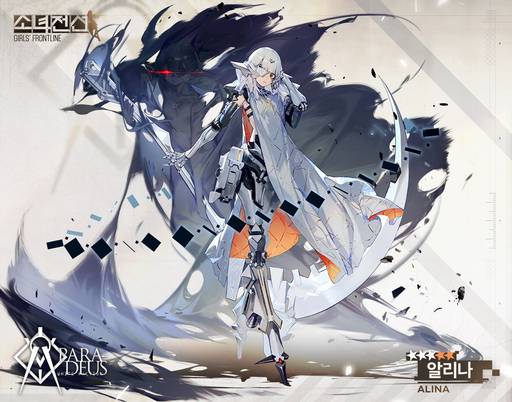 Despite being the melee of the pair, somehow the White Nyto is the actually good fire support one. Figures.

Her direct combat ability is average for a boss, with good DPS and survivability, and excellent buffs to melee units (which suffers a bit from the fact this is a game about guns) and an alright tanking skill. What she really brings to the table however, is surprisingly fire support capability with terrible range (basically 1 node away). Like, it's really good, with high damage every 2 seconds that contributes significantly to a fight, and is excellent in Theater where her range doesn't matter. She has combos with her sister, except Black Nyto sucks at providing support so it will likely not come up

Her cut-in skill that ups her DPS and effectively buffs your allies vs targets she marks. Uptime is actually quite good, with a 12s duration and 16s cooldown, giving you 4s of downtime. Interacts with Black Nyto's skills and when both mark a target, it takes extra damage from an explosion. Black Nyto's fire support is awful so this very rarely comes up.

What you actually want her for, it's her supporting fire ability. While she isn't usually ideal for max points in theater, her great firepower can help immensely for fights your echelons might be iffy with, and a clear with slightly fewer points beats not clearing. If youre supporting Black nyto, she also has some funny skill interaction.

It's alright, but it lasts 1 second. YMMV.

Interaction of Alina and Adeline The problem with the pair is that White Nyto is an excellent fire support unit hobbled with awful range, making it hard to use her on the attack. However, when supporting Adeline, she boosts stuff significantly. Black Nyto has good range but sucks at marking things, making it all but irrelevant for Alina in direct combat.