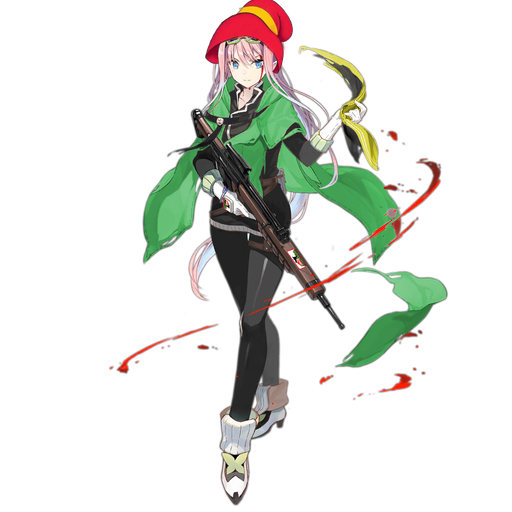 Santa's secret hit-elf to snuff out those on the VERY NAUGHTY list. Her skill involves RNG burst damage; she targets random stuff and applies a fair bit of pain on them, with three sets of 3.5x shots. If there's only one valid target, all three shots will hit that target. She's actually stronger than she looks, and you can kill most bosses (INCLUDING AGENT!) in one shot if you cheese multipliers hard enough. She won't replace anything in the regular meta, but is handy for anything that needs some burst damage (like some KCCO units), if you don't mind the randomness.

After activating her skill, EM-2 fires 3 attacks that deal 350% damage each. The attacks are fired at 120 ROF (double her regular attack speed at her base ROF), and she takes 24 frames to fire all 3 shots.

This means that she deals 1050% FP damage, or 750% if you only count the bonus damage from those attacks.

While in a long fight, the self-buff units will start to catch up, EM-2's skill means that she will be able to front-load A LOT of damage. In most AR fights, this is what matters, as most standard AR fights tend to be time-races (you have to kill enemy guards/scouts/dragoons/manticores/whatever before the dangerous things like jaegers/dragoons/manticores/whatever starts attacking you).

Additionally, note that EM-2's 6s ICD means that she almost always gets her shot when HG buffs activate (note that she still needs a moment to fire and her bullet to land, HG skills will usually apply before she fires her shots). This means that, if you are using HGs, she usually gets the full benefits of them for her skill.

A few more quirks of her skill and the notable effects those cause.

EM-2's skill auto-hits. This is very significant for some high evade enemies like scouts (which can come with obscenely high evade, ~100, which means you need ~100 ACC for 50% hit rate, most of your ARs will have at best 40-50% hit rate with fairy buffs, assuming no ACC tiles since most SMGs don't give that). She can instantly clear the scout line (assuming her attacks actually target them) during her skill and allow your units to start hitting the backline.

EM-2's skill has random targeting. This is sometimes good but often reduces her performance. While sometimes she can hit the backline directly and kill off dangerous enemies, which is good, she might sometimes hit irrelevant enemies (hitting the furthest dragoon when there are a few right in front of you attacking) or enemies that are almost dead (wasting damage). Unlike AUG where it can easily average out (AUG gets so many attacks that there is a good chance that she will hit the right thing enough times), all of EM-2's power is in 3 attacks, and missing one is a significant loss.

Also note that EM-2's super high FP attack means that she actually bypasses armor quite well, unlike most ARs. This probably won't see as much use since you don't often bring ARs to fight heavily armored enemies, though.

Not super good (since, for one, M4 exists, and there are just that many good ARs around) but as a more specialized unit one can definitely find uses for her here and there.