Most of this information is taken from 프로성능충 from Ruliweb's GFL forum. Again, if you speak Korean, you're best off reading their sources rather than ours, but the benefit we provide is that we're giving this information in English.

Some people asked about the movement speed stat not making sense to them. This is understandable, given how little context there is, but the idea of how quickly units move is important to the concept of kiting, along with how enemy targeting works and how to escape it.

To understand movespeed, we must first understand the layout of the battlemap. 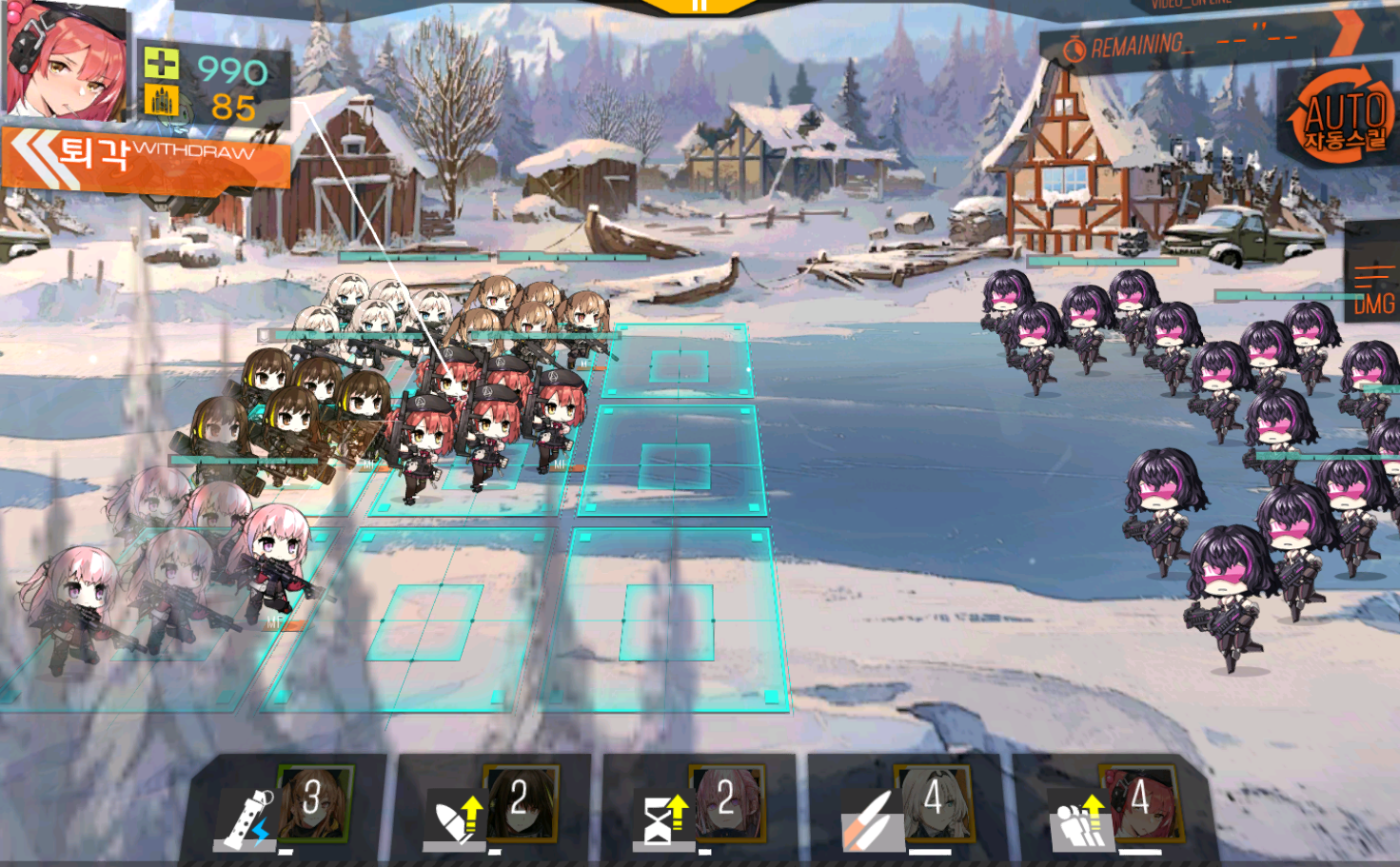 An echelon advances towards the enemy. Note the divisions for movement on the battlemap.

While it's easy to mistake them for squares (and they are in fact, shown as squares in the formation editor), each of these blocks are actually rectangles. Though you yourself can only move within a 3x3 grid, the entire map can largely be divided into similar effective rectangles, stretching infinitely on the X axis (though as a practical matter, you won't move all that much)

Each rectacle has a horizontal length of 12.5 units, and a vertical length of 21.33 units.

Thus, it takes longer to travel along the vertical axis than on the horizontal due to the increased distance. It is important to note that your units does not take up ALL the space within these squares, these are merely subdivisions of the battlemap, which is why your units can dodge AoE attacks by being on the edge of an enemy attack - the hitbox actually doesn't extend all the way through the spaces. Also, these are the base measurments that things like grenades work off of. 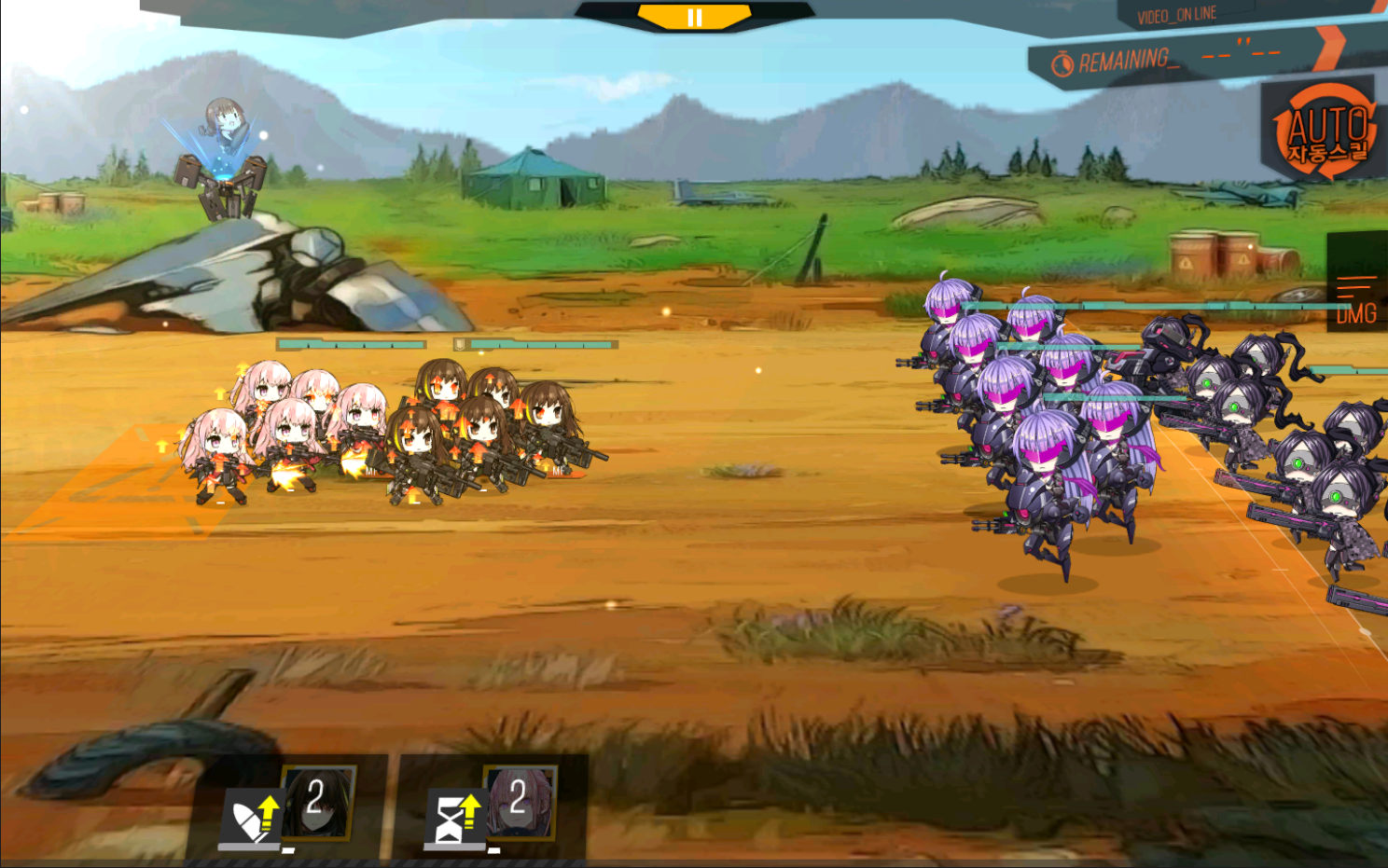 This won't actually hit AR-15, as she isn't within the attack's hitbox. Your T-dolls do not occupy ALL of the space of a square, nor do the AoE attacks necessarily fill it up completely.

Base movement speeds are determine by a doll's type. For you, they are (by order of speed):


These are baseline movements and can be affected by skills and equipment (which is why I put rifles with camo cloaks in as an example). Using this, we can thus calculate how much time a unit requires to move about. Thus for example, if a Handgun wanted to move 1 grid unit, horizontally, we can thus calculate:

For a machine gun, this movement will thus take

A fairly noticeable difference. For diagonal movement, use 24.74 units (arrived at using Pythagorean Theorem. Because math and geometry are useful things to learn kids.)

That's for solo movement. For overall echelon speed, the team travels at 75% of the speed of the currently slowest member. This is why people often say "don't bring rifles with camo cloaks to fights where you need to move a long way to the boss." Because hold on to your hats, you're reaching speeds of three.

For enemy units, you can look up their movement speed stats elsewhere, as they can get pretty varied. They do however, follow the same basic rules.

While you will not necessarily require a thorough knowledge of this (at least, not at a book keeping level), having at least a basic understanding will help you understand how to kite and handle enemy mechanics which will become more prevalent in the future, especially with bosses and their AoE triggers, and even normal enemies that have AoE mechanics of their own.

Author: Katyusha
Tags: Autism Game Mechanics Tactics
Girls Frontline and related trademarks are Copyright © 2015 SUNBORN Network Technology Co., Ltd.
This website and its staff are not in any way affiliated with it for obvious reasons.