Will be updated periodically when we scavenge some new shiny stuff.

Trivia #1: M4A1's chibi sprite in the T-Doll index has her railgun from her MOD3 skill. 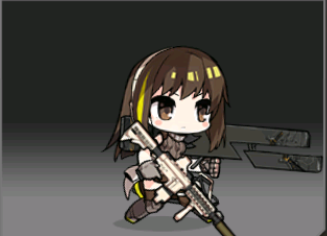 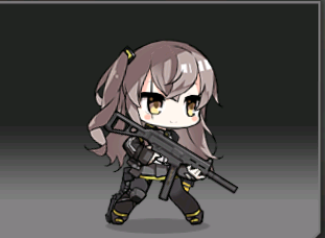 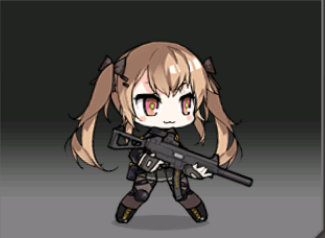 Trivia #3: Contrary to popular belief, UMP45 isn't flat because her magazine is straight unlike UMP9's curved magazine. She's flatter than UMP9 because the UMP9 has a higher magazine capacity than the UMP45. (UMP9 holds 30 bullets while UMP45 holds 25 bullets per magazine.)

Trivia #4: Calico's chibi sprite is the only sprite (in EN) that doesn't have her eyes closed when she dies.

Trivia #5: WA2000 is the only 5 star T-Doll that doesn't blink in her standby animation. (The only times she blinks are when she's at the dorm and during her win animation, where she only blinks once.)

Trivia #6: According to NS, G41's artist, he has no idea what kind of animal girl G41 is, he just drew her according to his fetishes. (Source: The Art of Girls' Frontline photobook)

Trivia #7: When you align the number to the letters of the alphabet (A1z26 Cipher), the AR team's logo spells out COLT. (Image was also taken from The Art of Girls' Frontline photobook.)

Trivia #8: The 794 of the loading is a reference to the helicopter in Metal Gear Solid.

Trivia #10: Thompson's gun has a sticker on the stock that says "CAKE" and the logo is a skull when it's right side up but if you flip it over, it looks like a cake.

Trivia #11: According to Imoko, the artist of G36, G36 always looks angry because she has poor eye sight and has to squint. She used to wear glasses when she was younger but as she grew up, the glasses broke. She didn't want to replace it because it was given by her commander.

Trivia #13: The Dinnergate that appears when you complete the Sangvis Ferri furniture set is actually P7's pet named "Chopsticks."

Trivia #14: FAL's pet ferret was originally named Mayfair but was later switched to Fel since it was alot closer to FAL's name.

Trivia #16: Unlike the other archetypes, shotguns are spelled out, while the others are written in shorthand. (I.e. RF, SMG, AR, MG)

Trivia #17: G36c's hair is mirrored on her chibi sprite. (This applies both to her original skin and her Ode to Summer skin.)

Trivia #21: FAL claims to have an excellent sense of fashion, every other T-Doll thinks otherwise but is afraid of FAL due to her combat experience, Five SeveN is the only one who can get away with saying it to FAL.
*Note: She managed to amass a wide variety in her sense of fashion being the Right Arm of the Free World.... Just not the good ones.

Trivia #23: WA2000 and Springfield, sharing the same artist, both have the most amounts of skins.

Trivia #24: OTs-14 carries 2 different versions of her gun, on her normal art and her damaged art.

Trivia #25: ST AR-15 has a different artist from the rest of the AR Squad.

Trivia #26: G41's hair decoration is similar to the logo for Xbox. (Her damaged one is a reference to the Xbox's red ring.)

Trivia #27: M1 Garand's "ping" is in the game, where she ejects the clip. (Credits to Reddit user: JustAnotherSuit96 for providing the link for PD Negev's video: https://www.youtube.com/watch?v=uZA8-4_-LuU&feature=youtu.be&t=94)
*Note: Image was taken from PD Negev's youtube video that was linked above. 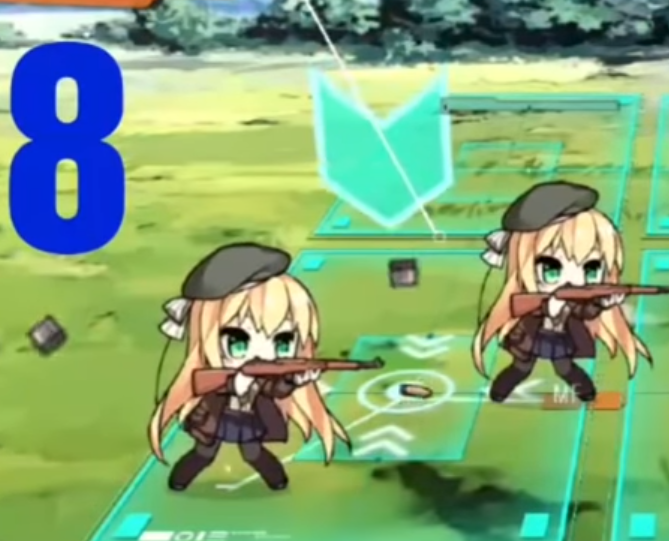 Trivia #28: IBM made both printers and BARs. So the level 0 printer machine in the dorm is an old IBM teletype writer.

Trivia #29: The guns used for the logo for combat was FN's BAR and Scar.

Trivia #33: Type 56-1's default and skin also has a slight change to the gun, the default skin has a stamped receiver and the "Firecracker" skin has a milled receiver.  (Credit to Zman941 for the information and photo) https://imgur.com/MX1XUvA

Trivia #34: Thompson's introductory line mentions she's a 1928A1 model, however standard models of the 1928A1 doesn't have vertical wood grips and Cutts compensator, so she's suspected to be a 1921 model but remodeled as a 1928 for the US Navy, which explains the lack of Cutts compensator. (Or you know the standard whoops) [Credit to Zman941 for the information]

Trivia #35: The regular M1911 has a skeletonized hammer, extended beavertail, and a skeletonized trigger. Her digimind has front slide serrations. [Credit to Zman941 for the information]

Trivia #36: Glock 17 is most likely a Gen 3 because it's the most common and the rail being present.  [Credit to Zman941 for the information]

Trivia #37: Skorpion is a VZ.61 because of the curved magazine. [Credit to Zman941 for the information]

Trivia #38: STEN Mk. II is most likely the late war production model having a skeleton stock.  [Credit to Zman941 for the information]

Trivia #39: Springfield's grip area on the stock indicates that she's most likely an A3 model.  [Credit to Zman941 for the information]

Trivia #40: Mossin Nagant's round receiver indicates that she's most likely a mid 1935 model or later.  [Credit to Zman941 for the information]

Trivia #44: M1897 is the trench variant of the gun, having a heat shield and bayonet lug. [Credit to Zman941 for the information]

Trivia #46: AK5 is a mixture of the full length AK5 with the sights that's normally seen on the AK5D.  [Credit to Zman941 for the information]

Trivia #48: Noel's moving animation has an after image appearing. 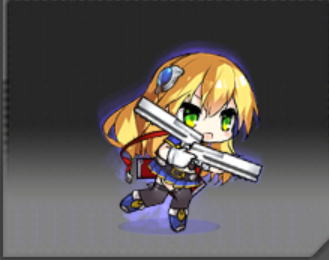 Trivia #49: Noel's  μ skin is the only T-Doll (in EN to my knowledge) that shoots blue bullets.

Trivia #50: You can find the AR team's logo on SOPMOD's jacket. (Her zippers)

Trivia #51: If you click anywhere in the screen, your T-Dolls resets their idle animation but Sangvis units won't reset.

Trivia #53: Whoops (This got adjusted to the photo you see now which costs 580 diamonds)

Trivia #54: There are only 2 T-Dolls that shoot with their rifles shouldered, instead of being over their shoulder, FNC and FAMAS. Why? The likely answer is because the stock of the other guns are too long. 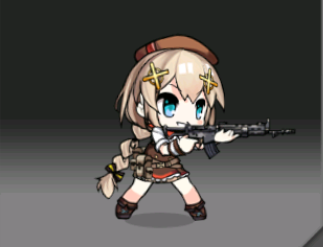 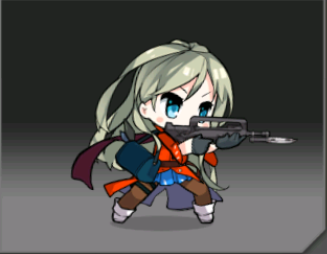 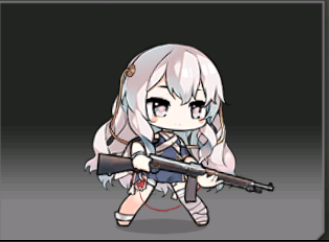 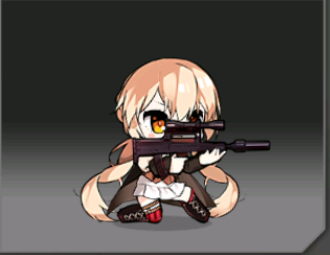 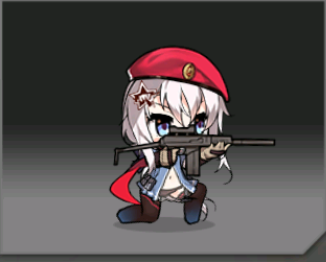 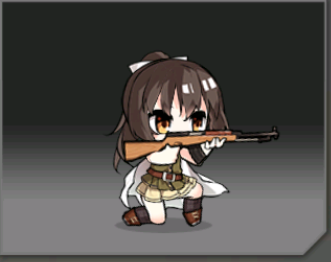 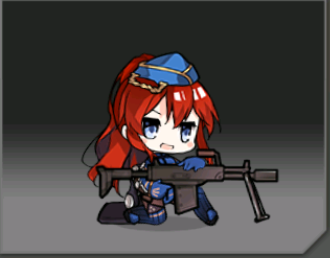 Trivia #57: Among all the AR T-Dolls, the only one who shoots in the proper standing firing stance is FAMAS. *Note: FNC is close, however she bends her knees inwards. 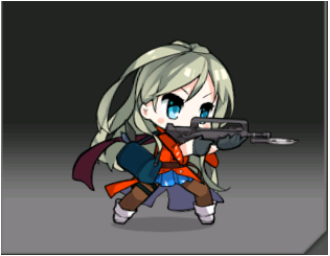 Trivia #58: Among all the HGs in the game, only two T-Dolls have their slide's animated, namely: Bren Ten and USP Compact. (Getting the animation for USP is a huge pain in my tiny tush. Had to play and replay this frame by frame.) 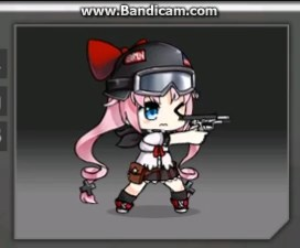 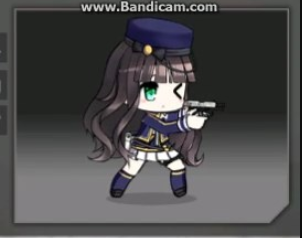 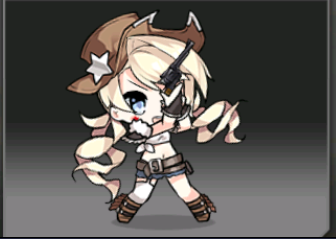 Trivia #60: Stetchkin is the only HG that shoots with the stock shouldered. 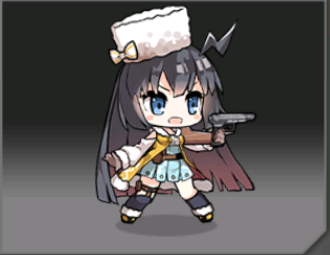 Trivia #61: Grapecano and G28 has really good shooting posture from the crouching position. 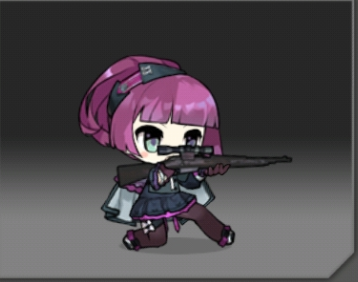 Trivia #62: The bird we get from the Cupid's Reply event is named after a World War 1 pidgeon war hero, Cher Ami. For more information: https://old.reddit.com/r/girlsfrontline/comments/az6who/cher_ami_the_history_of_the_name_of_your_free_pet/ 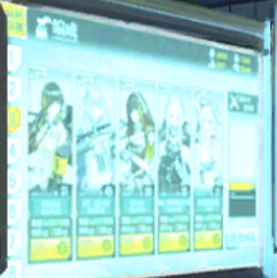 Trivia # 68: You could actually see the Memberberry Muffin on the Coffee Shop- Airport Notice Board Counter.

Trivia #69: The Fireworks of Summer background is in Asakusabashi, Tokyo.

Trivia #71: April Fools is the only day I'm appreciated. (Thanks for the fish guys~) 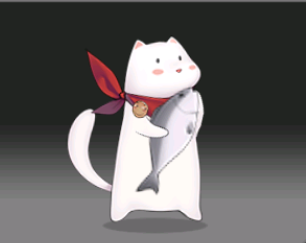 Trivia #72: RO is a dinner gate at April Fools 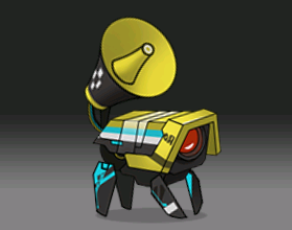 Trivia #73: Technically speaking, Mossin Nagant has the tallest sprite among all the dolls. (Only on April Fool's Day because of horse) 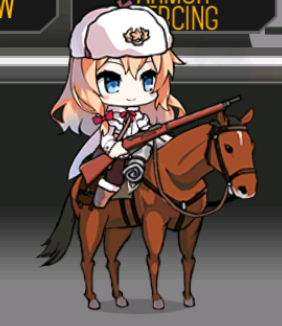 Trivia #74 (This was exhausting to deal with =A=): T-Dolls who sings on the mic and the songs they sing

Type 95=  鄧麗君: 在水一方 (Side note* technically not a song but a lyrical poem)

416= Unser liebe fraue (I have no idea who sang this song, it's a pretty old marching song)

SAT 8= No idea, holy shit, sounds more like a shopping list of groceries than a song. Not actually sure if it's a song.

Trivia #75: K2 is the only non-story character that has her own promotional video.

Trivia #76: The "ID Card: Sanctuary Oath" and the background used for oathing a T-Doll is Holyrood Abbey, Scotland. 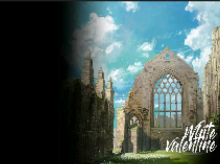 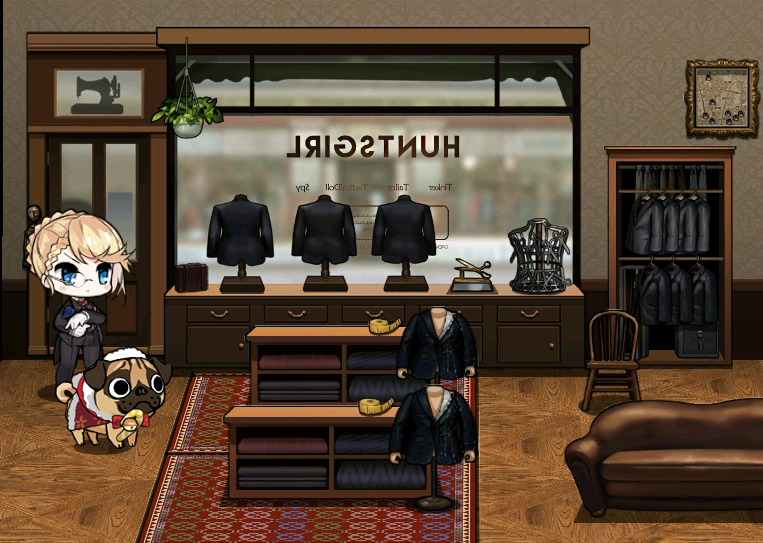