First off, this is primarily made from the Korean sources on Namu Wiki for GFL, which frankly, is a better resource if you can actually read Korean. Their notes are much more complete, and most of this is based on their work. With that out of the way, let's get down to business.

The primary purpose of most active control in the game is actually related to targeting. As such, it's probably a good idea to get an understanding of how targeting works. That is, your T-dolls. Every doll type has a different targeting algorythm with variances for some individual T-dolls (such as RFB). Making the most out of these can give you an advantage in combat, if you know what you're doing. (Enemy targeting will be discussed in a later post.)

As mentioned in other articles, the maximum firing range of your echelon is determined by the furthest ahead (that is, the right most) unit. As a demonstration, here is a standard F type formation. 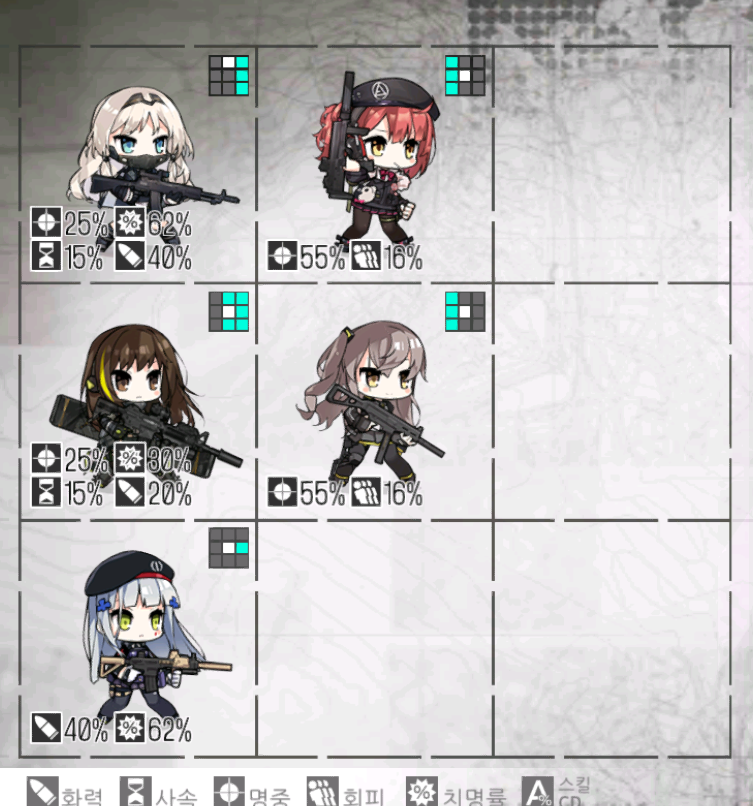 And this is their firing range. 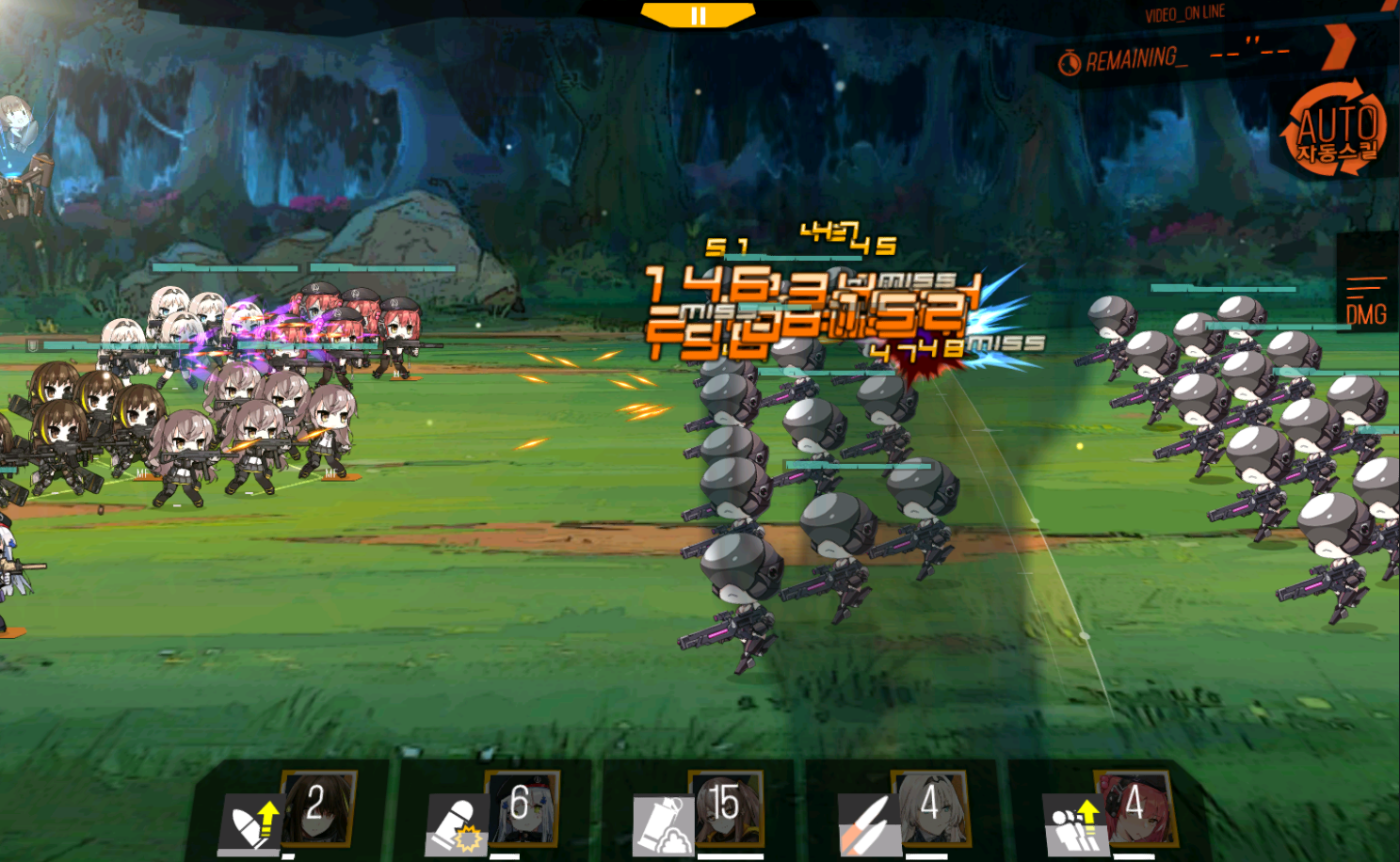 The yellow line there behind the first set of charging vespids is the maximum range. 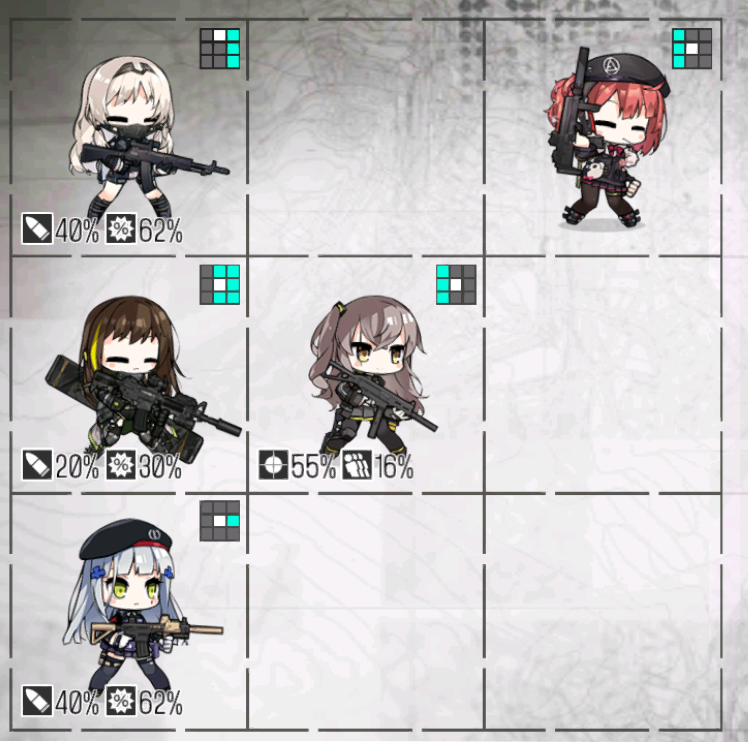 Now we moved 1 of the SMGs forward. So now, let's look at the firing range vs the same group (for those curious, it's the first batch of Vespids in 0-2 on the standard farming route.) 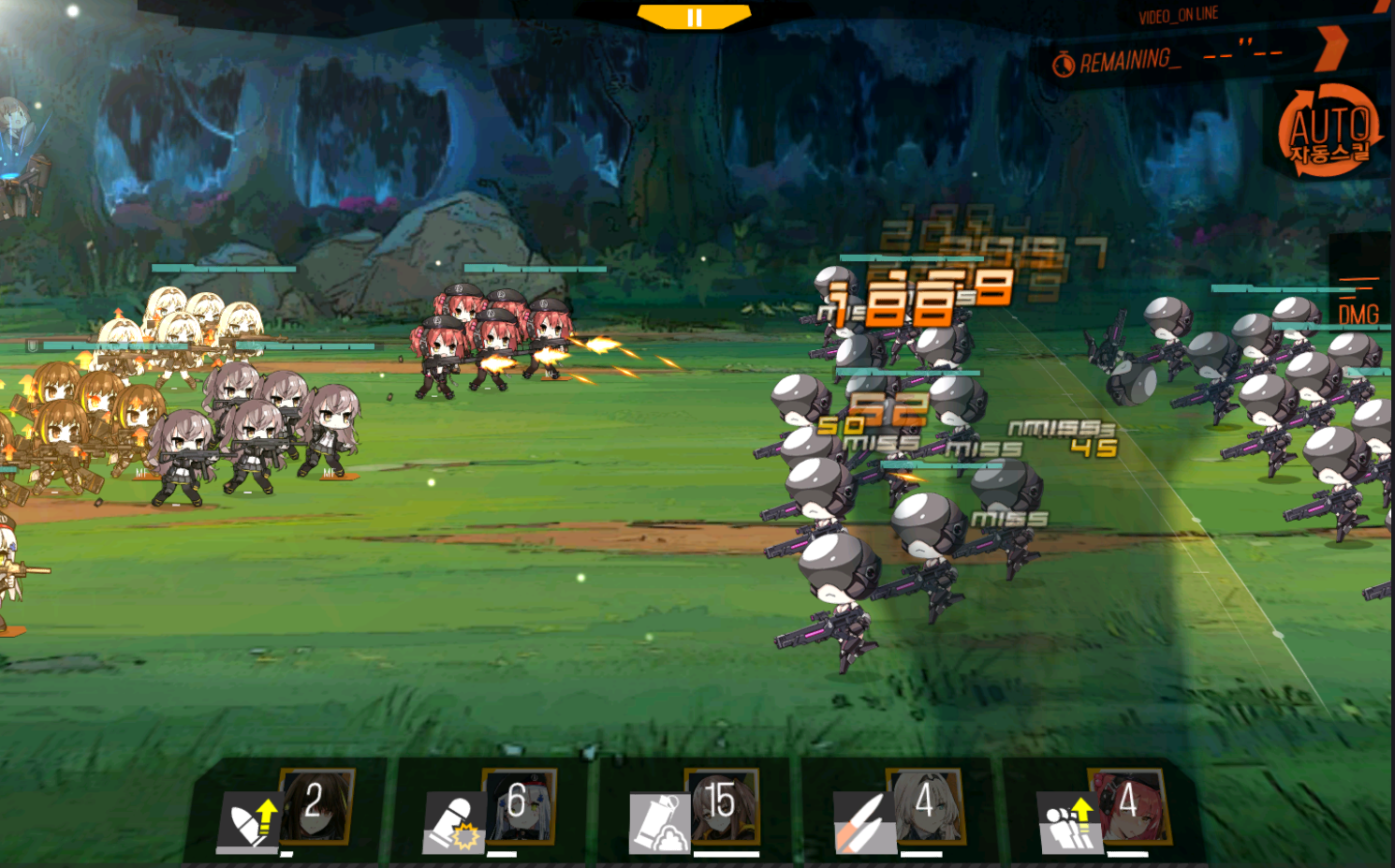 Notice the firing range is now slightly greater, allowing our units to shoot from farther away. Unfortunately, being that far ahead also means enemies will get to shoot that target earlier as well.

Now that we've gotten the idea of Echelon range, here are the basic rules by each class.

Skill targeting varies skill by skill. Generally, it will tell you, or else you can look up the skill name. Note that even if otherwise identical, different named skills that do the same thing (such as for sniping skill) may have different targeting conditions. For example, M99's Steady Shot will shoot the enemy at the far back, while NTW-20's Interdiction Shot will shoot the closest enemy. What's important is that due to how targeting and locking works, it is entirely possible (and quite likely) that T-dolls will in fact, shoot a completely different target with their skills from their primary target with their guns.

Grenade targeting is an exception to this, and is somewhat complicated.

By default, damage-type grenades (including molotovs) will target enemies with the most remaining HP within your firing range, regardless of their actual position. This is why multiple grenadiers, with the same cooldowns are a bad idea - they'll blow up the same thing. Should there be multiple enemies with the same HP, then it will engage a non-random enemy that is designated a special target. What the rules for this are, are... actually unknown.

We literally have no idea, as it seems to vary from mob type to mob type. However, it is fairly consistent, as you will notice grenades veering off towards the same targets still.

By the way, Bombardment Fairies work off the same rules.

Flashbangs and Smoke grenades are a little different. They will attempt to throw their grenade at the enemy group with the most HP towards the middle (presumably trying to maximise the effects), rather than the closest.

So, knowing these rules, what can you do with them? For one thing, a known problem of RFs is their tendency of engaging through a mass wave of tough tanks because the enemy rear line is not yet in range when they begin to open fire, resulting in possible unnecessary damage because your RFs were shooting the wrong thing. So, let's see what happens if we exploit some of these rules about ranges and targeting.

Here's what happens if you had 1 of the SMGs starting forward at the 9 position at the start of the engagement (sacrificing whatever buffs it gave the the AR, but that's fine in this case)

(image credit to dcinside's mica boards, which we reference a lot.)

Here we can see multiple of those rules in effect. Let's analyze what happened here.

Because the firing range was extended by PPS-43 being forward, Super SASS was able to engage the enemy rear line immediately, taking them out before they could do damage and leaving only the low damage melee ranks ahead. Her job of extending range done, PPS was moved back, shortening the maximum range, but all other enemies were already within firing range anyway, and this pushed the enemies that would have engaged her to engage the main tank (UMP45) instead. As she reset her targeting via movement, she proceeded to shoot at a different enemy after throwing her grenade. 9A91 engaged the forward most drones approaching Super SASS despite them being physically far from her, because they were the absolute closest via the X axis alone. UMP45's smoke grenade was thrown not at the closest enemies, but the cluster of enemies which at the time had the most HP. This was no longer true by the time M9 threw her flashbang however, and she threw it at the closest group because they had the most HP remaining at the time of skill activation.

Though not quite perfect, the formation took MUCH less damage than it would have if it maintained only a standard F formation with no active controls.

Knowing how your units handle targeting, and exploiting it can give you significant advantages in the battlefield. This, combined with actively controling your units allows you to win battles you should otherwise have no business surviving. As EN catches up to CN and KR servers and battles become increasingly difficult, this sort of thing will slowly be more required on your part to succeed as a commander.