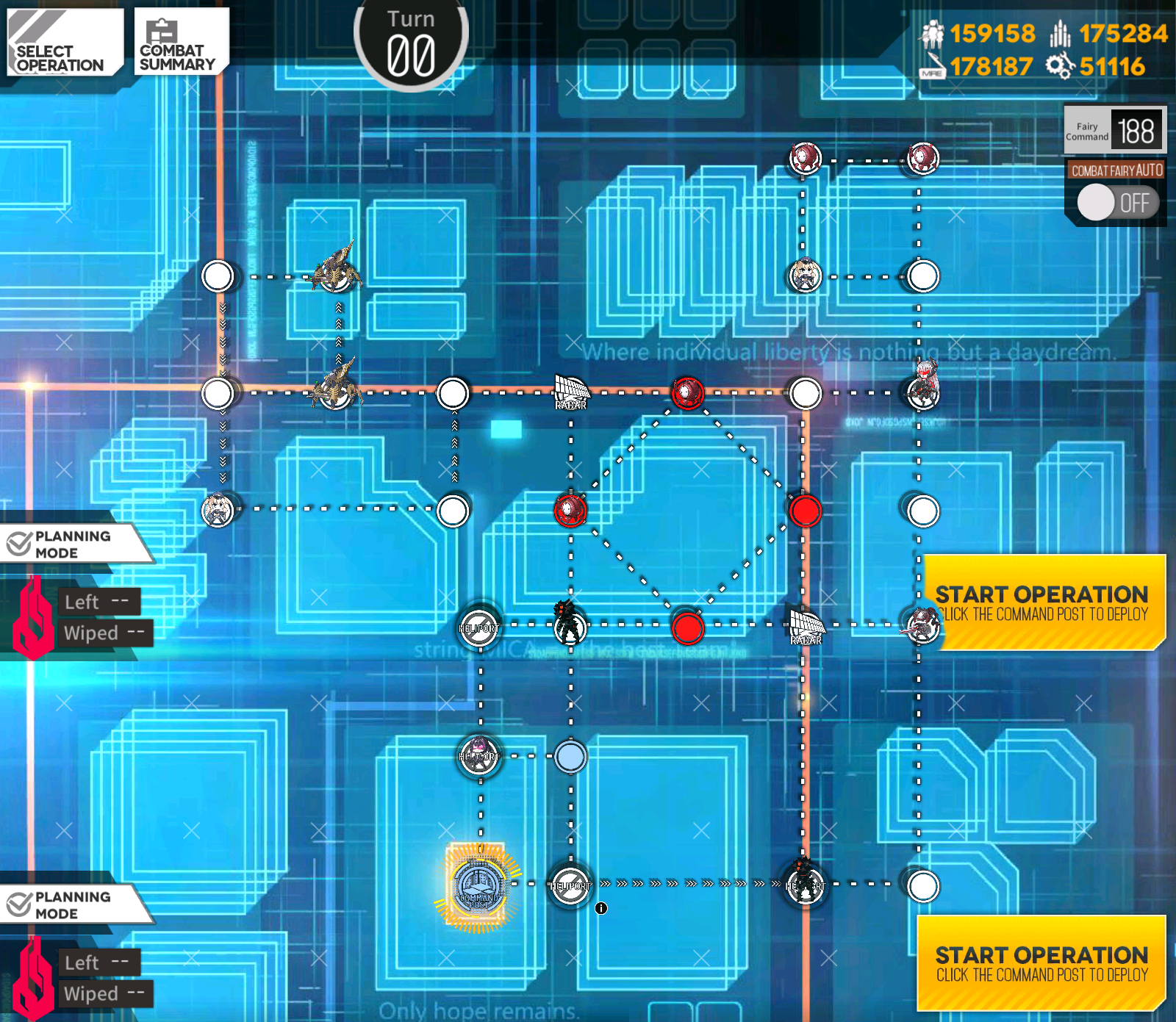 The key to this map is that Radar Towers don't only give vision. Well, it's even a daytime map so they'd be useless otherwise. So, in this case, the Radar Towers will actually convert one of the enemies tagged with ??? into another hostage. The two Radar Towers in the middle of the map control one hostage each. Bottom right one turns the ??? Golyat into a hostage and the top left one makes the ??? Manticore into a hostage. So, going by the hostages dying on turns 2 and 3, you have a set time limit on when you need to STEP ON (note, NOT CAPTURE) each Radar Tower. You need to step on the bottom right one on turn 2, and the top left one on turn 3.

So what's the ideal way of doing this? First up, you'll want to rush the closed Heliport two nodes away from you, where the data zombie starts out at. Don't worry about the Sangvis unit lurking around your Command Center, it'll prioritize capturing the closed Heliport it's on. Capturing that closed Heliport will surround another closed Heliport, giving you a better position to get to the Radar Tower, and it also gives you some extra AP.

Turn 2's first priority is getting to the Radar Tower. After that, move off to the right of that node so you're out of range of the red Golyats. Next, you'll want to deploy your second echelon and start moving to the other Radar Tower. You'll only have one AP, but at least you'll be able to stop on a closed Heliport to get you even more AP next turn.

Turn 3 you should get to the top left Radar Tower so you don't fail the map. Once you've stepped on it, you shouldn't be in range of any Golyats. Your next priority is securing the top right hostage.

Since I can't double check this, I'm not too sure what the top right's Golyat has for an aggro range. Just be sure to stay out of it unless you want to block yourself off from the hostage and risk a fail. You should spend your remaining AP on a dummy so you have more AP to work with next turn.

Once you've secured the top right hostage, you'll need to focus on the top left hostage. With how the Manticores move around, you should have a decent amount of time to grab the hostage and leave before the Manticore blocks the exit out. After you have both hostages...it's basically just running back to your Command Center without getting attacked by any of the remaining enemies. So do what you can with the ample AP you should have to dodge any enemies on the way back.