With Arctic Warfare finally over, the first thing most people are concerned about right now...is how to prep for the next operation. Fancy that. Well, Deep Dive is the next major op up on the list. And, oh boy, does it shift the priorities for things to have. (tldr at the bottom)

Pure difficulty wise, it’s a small step up from AW. The bigest difference is that you have multiple new mechanics and objectives introduced in Deep Dive. Let’s start with the new map objectives, since majority of the maps will involve them in some way.

First up, we have Hostage Rescue objectives. 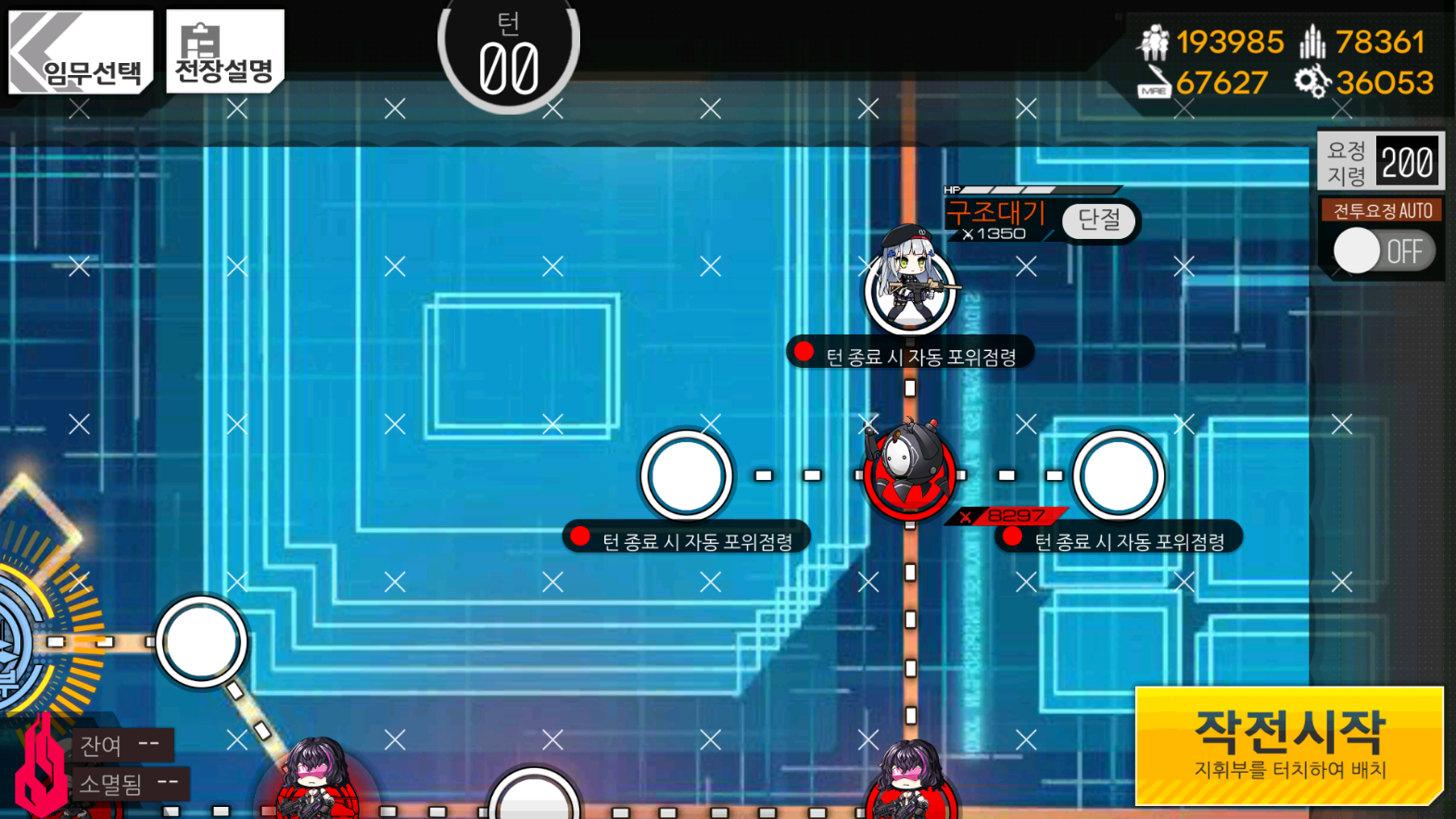 These involve making contact with a hostage unit in the map and then extracting them via heliport or command center. 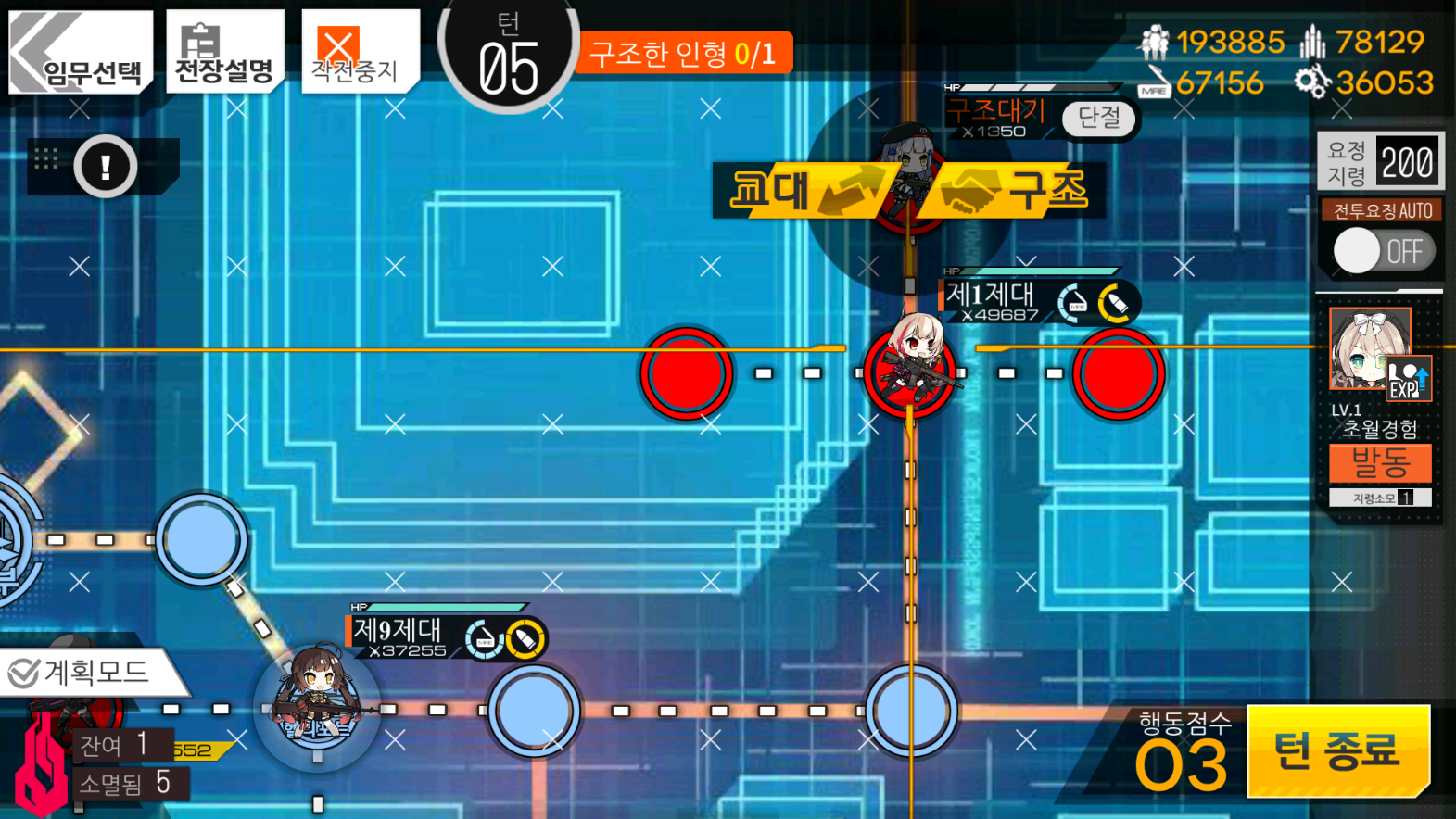 Once you make contact, you’ll be able to use the swap function or the other button which secures them. 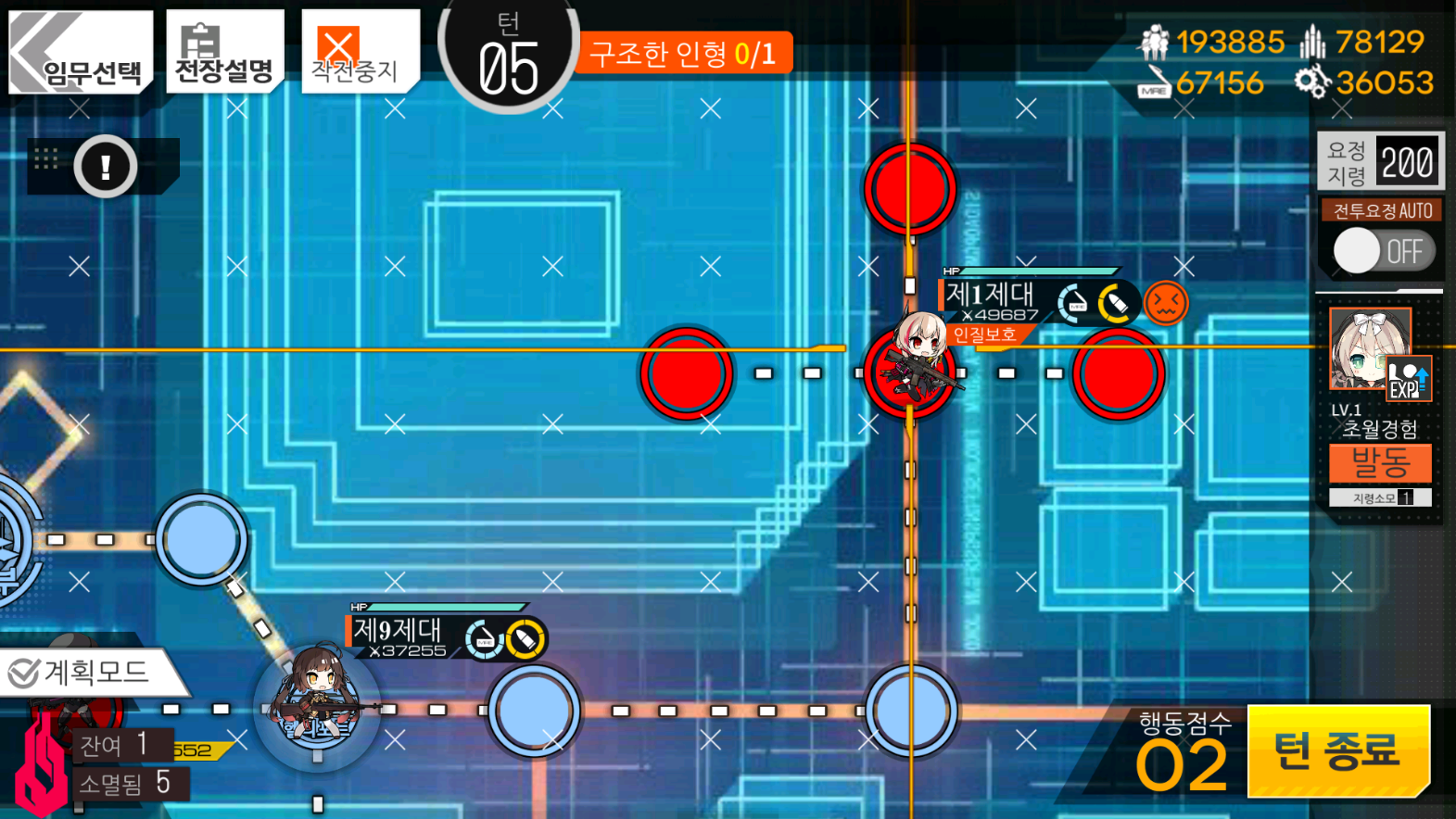 After securing them, you’ll have a display that shows that your echelon is escorting a hostage. Escorting a hostage doesn’t affect your echelon combat wise, so don’t worry about that. The only thing you need to note is that if your echelon has to retreat or is defeated in battle, you’ll lose the hostage. Depending on the map’s requirements for success, you may actually straight out lose the map because of this.

Do note that an echelon can only escort one hostage at a time. Plan wisely. 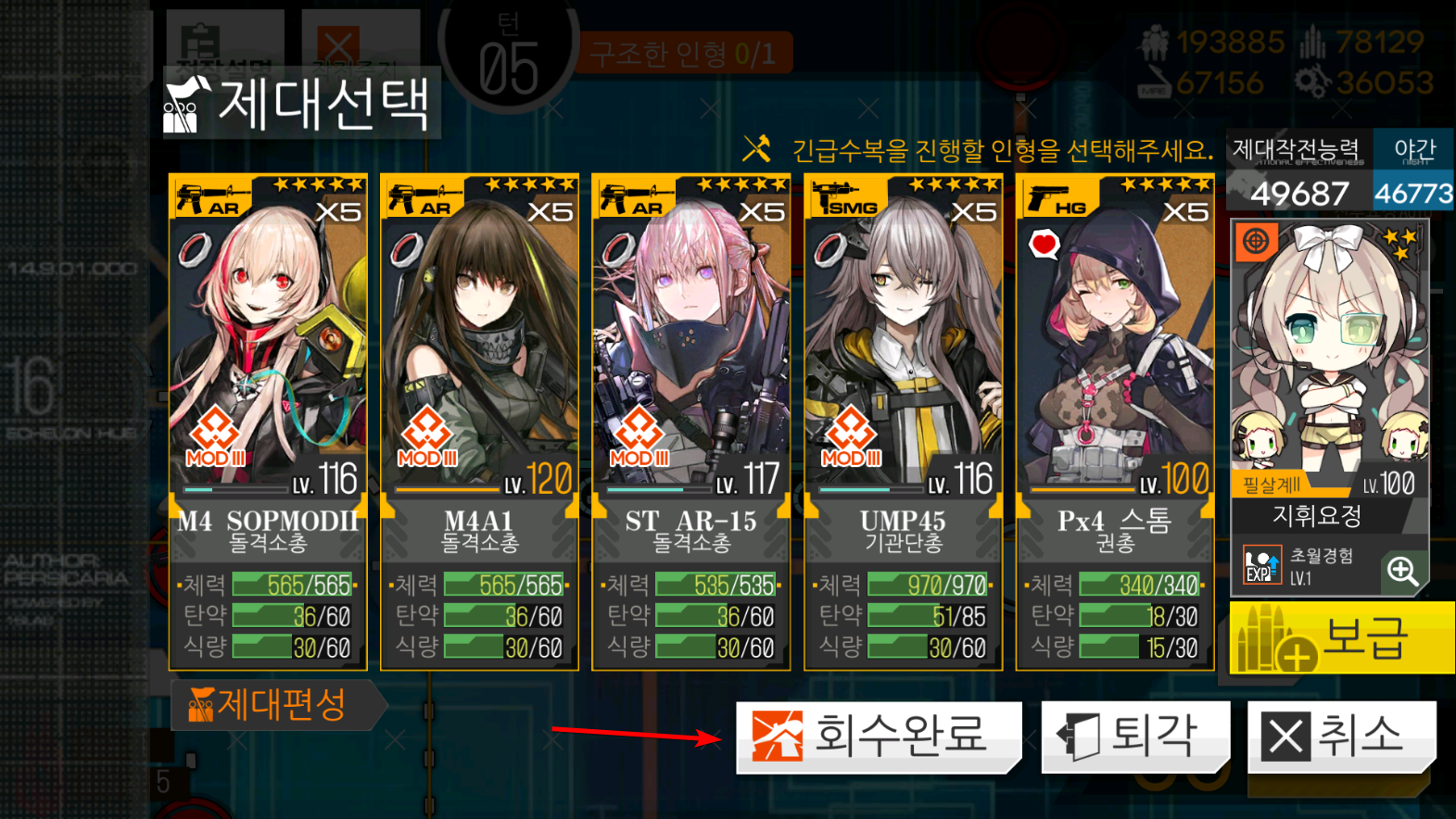 First, hostages have a health bar. Notice that in the picture used as an example, 416 had 3 sections of health. These sections represent the amount of times the hostage can be hit before being killed. Since 416 has 3 sections of health, she can be attacked 3 times before she dies. Pretty simple. 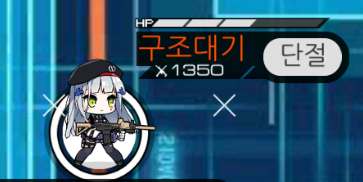 Next, there can be more than one hostage on the map at the same time, some of the maps can have upwards of 4 hostages that you need to extract.

This mechanic as a whole doesn’t require anything too special to prepare for it. However, on the maps that require a bunch of hostages to be extracted, having multiple combat ready echelons is very helpful.

The next objective that gets introduced in Deep Dive are supply routes. To put it simply, you need to form an unbroken line of nodes from a designated node, 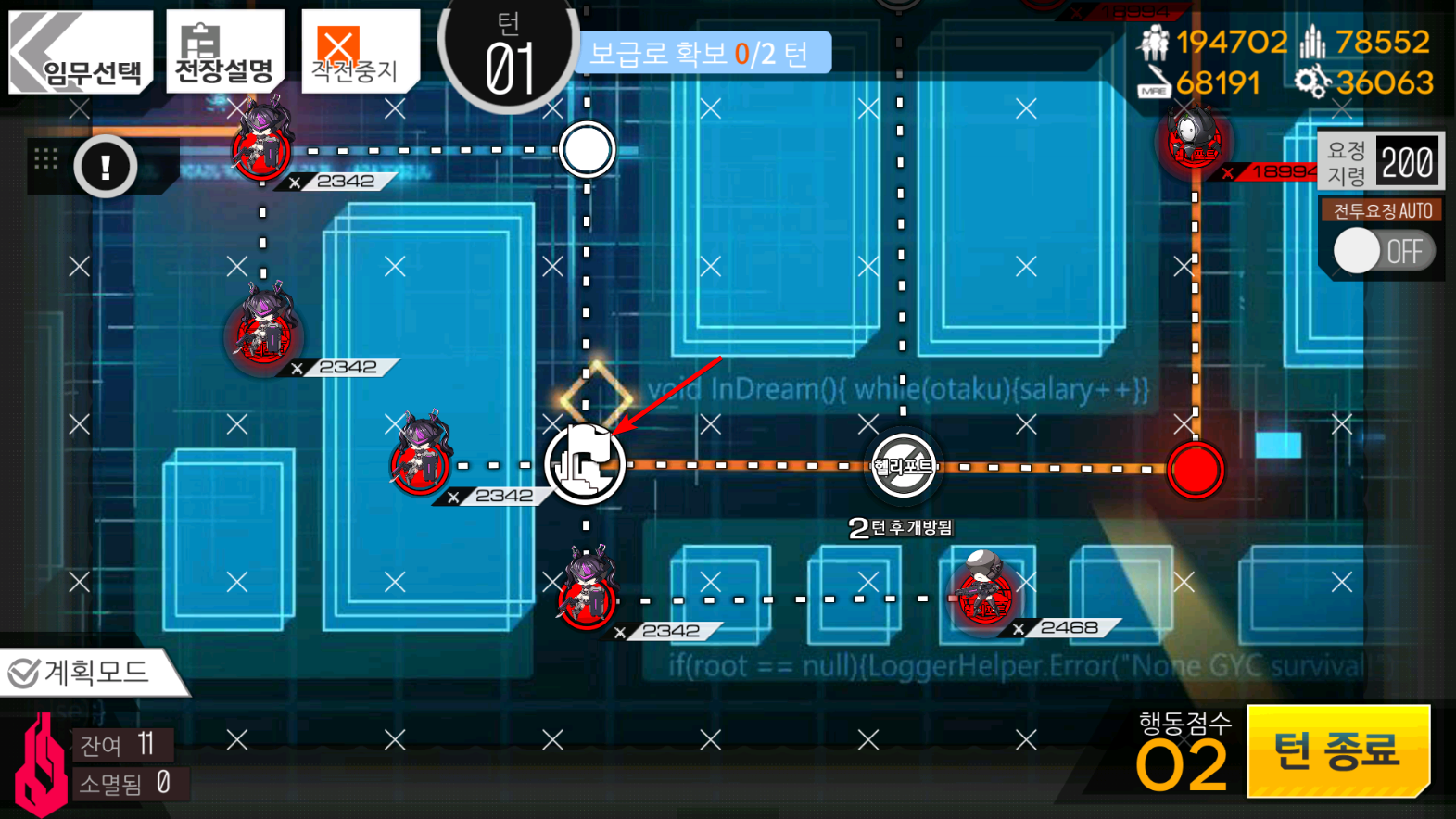 to your command center for the designated amount of turns. The amount of turns you need is stated next to the turn count. Losing a node in the line, would result in not being credited for that turn. It would also expend the turn count needed to clear the map. You need to maintain a line for the designated number of turn, if you lose a node you need to re-establish the link.

Once a supply chain is built, you’ll get a notification that it’s in effect and the count will start ticking up at the start of your turn. You’ll also see that any lines of nodes to your command center will have a flashing blue highlight in the dotted lines between the nodes. 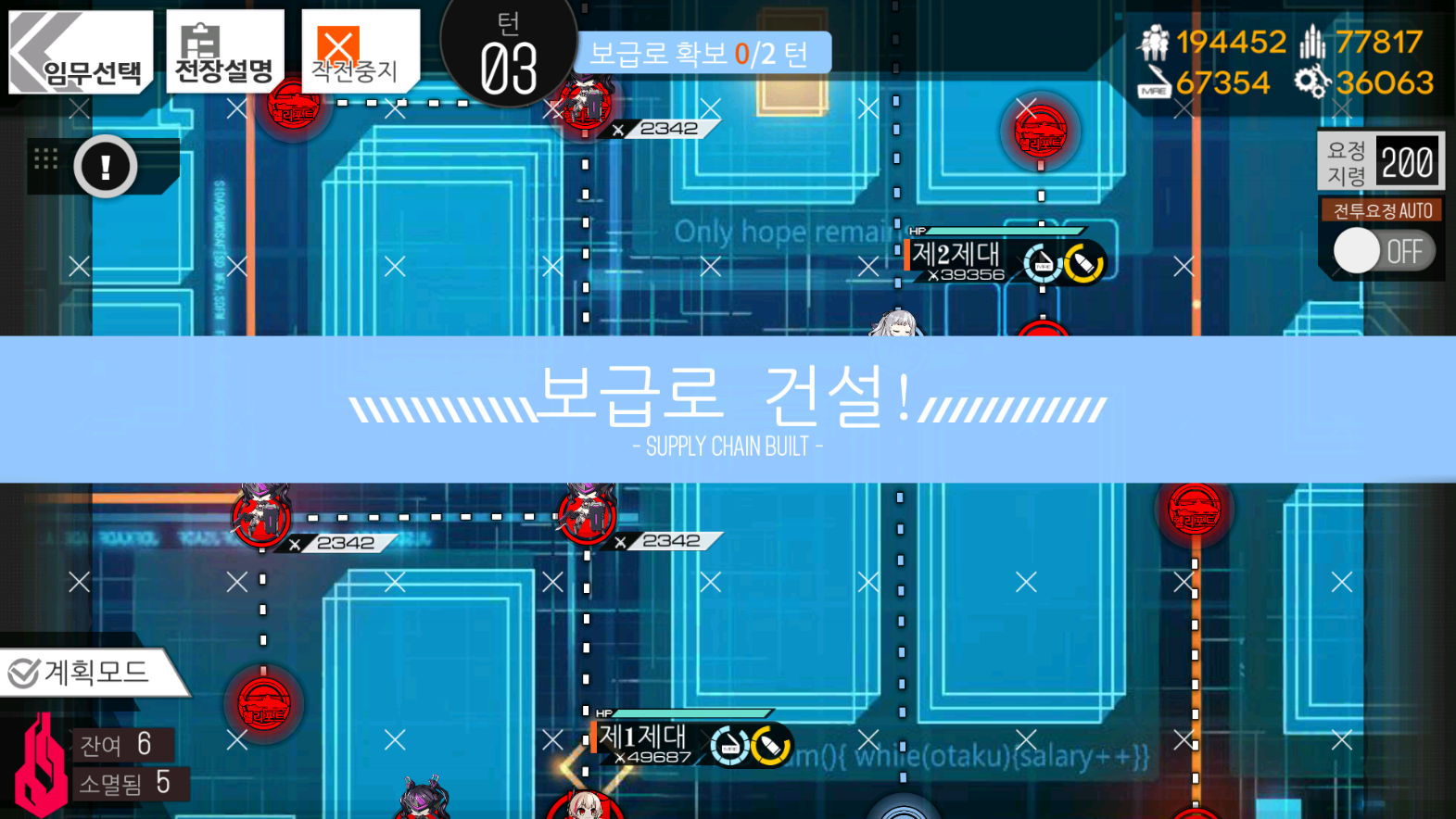 Like hostage rescues, this doesn’t require anything special to prepare for. Just be aware that the later maps have some very long supply routes that you need to deal with, like 3-2. 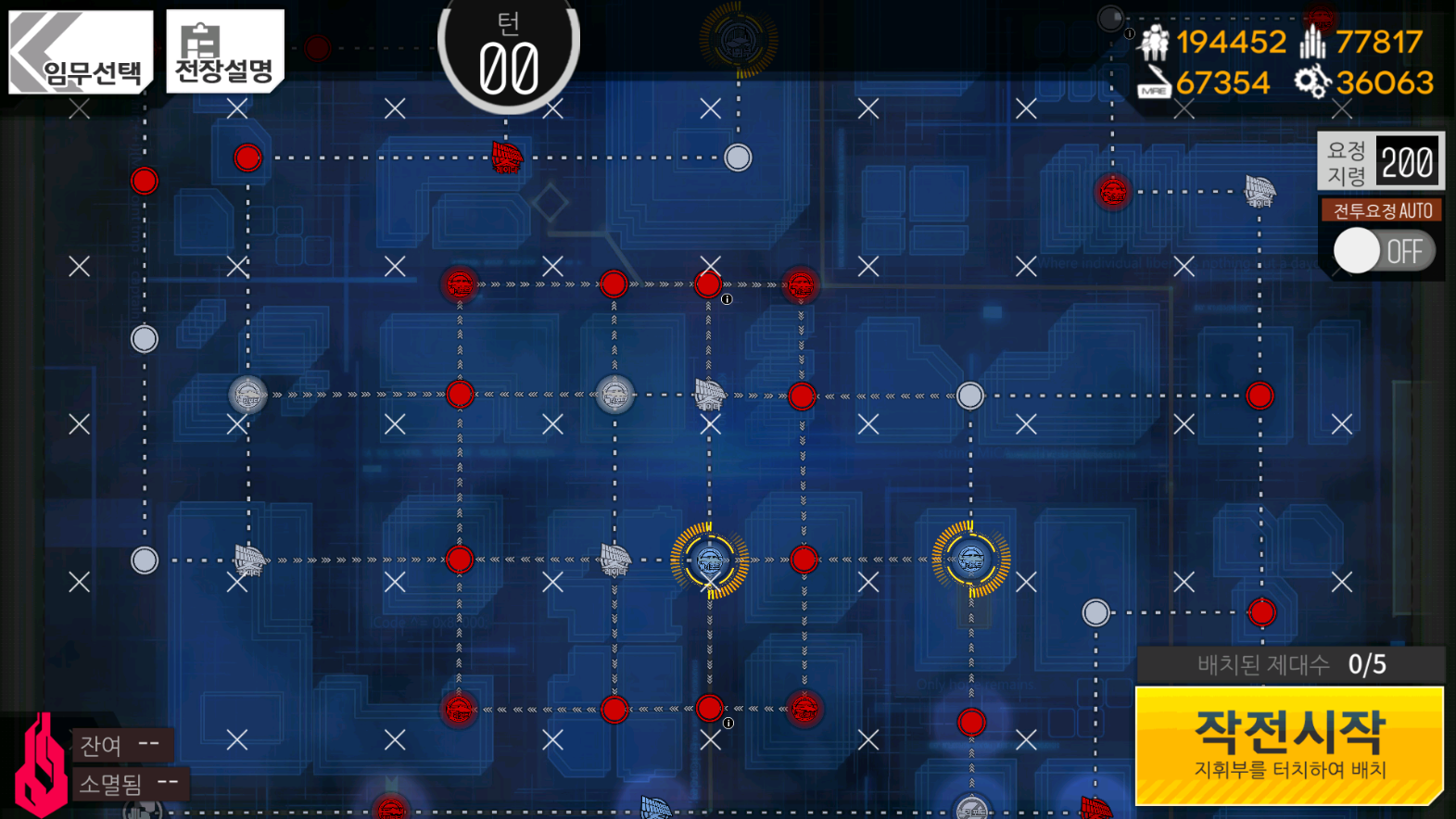 Where you need to go from the bottom left of that map to your command center at the top of the map. You’ll want a few good echelons to be able to actually get the route going and to defend it.

The last thing introduced are Golyats. 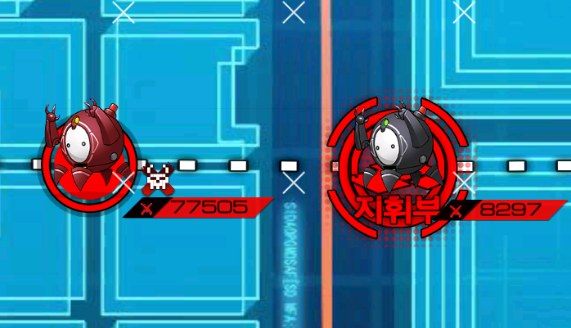 Golyats are walking bombs that come in two flavors, red and black. Both varieties pack a huge punch, detonating for roughly 9 jillion(all of your HP) damage if they come into contact with your T-Dolls in battle. However, the red variety has a LOT more HP. We’re talking in the range of 150k HP or more, definitely not killable with conventional means. This means it’s typically used as an obstacle to make the map harder.

Both varieties work the same way. They charge down towards your T-Dolls in battle, either detonating shortly after they come into contact with your T-Dolls (and dealing damage to every T-Doll in the battle) or run past and failing your battle.

So, how do you deal with these? The black golyats are just a “kill it until it dies” type of deal. Nothing special. The red golyats however, are where things get interesting.

Now, you’re never required to kill these in a battle to progress, but like Jupiters in Arctic, killing them rewards you with an easier time in a few maps. You have a few options to deal with these.

The first is probably the easiest to manage for most players. You simply use enough utility to delay them until you have a force shield SMG like Thompson ready to absorb their explosions with their shield. Things like smoke grenades and flashbangs are the go to utility for this. So picking up some niche picks like M1911 or M9 may be a good idea. Whichever works. You should have some good T-Dolls that already have those skills on hand though. For flashbangs, you may need more than one in an echelon for certain golyat setups.

This is easier said than done. Some red golyat echelons are easier to kill than others. For example, the one in 1-1 of Deep Dive, you only need a smoke and a force shield at minimum. But others may require you to use multiple flashbangs to stack all of the golyats together if one lags behind.

You also need some in-battle micro to make this work properly. Depending on the setup required, having multiple flashbangs means you’ll need to use them as one wears off to maximize the amount of time you have it stunned. Meaning...no autoskill. Have fun figuring that out.  It’s something you’ll likely need to get used to. Thankfully, it doesn’t get too complicated, yet.

Do note that you need to retreat any other T-Dolls on the field aside from the one you’re using to detonate the golyats. As mentioned above, they do field wide damage. Getting the other T-Dolls blown up defeats the purpose of clearing them with a force shield.

The second method also uses utility to delay these golyats, but instead of using a force shield to absorb the damage, you just outright kill them. Yeah, not a viable method for most players. If you can accomplish this, well I don’t think you need to read how to. stick with method one. Outside of new mechanics and enemies, the big thing you’ll be looking at is fighting a fair bit of night battles. Like Arctic, you’ll have all of chapter 2 and half of chapter 3 taking place during night. You’ll be facing a mix of armored and non-armored enemies during these battles. You’ll also be fighting the end boss, Gaia, during a night battle as well.

Purely prepping for the story missions, you’ll be fine with two AR/SMG echelons and two echelons that have armor pen. The reason that four echelons is recommended is due to the fact that, the maps on chapter 3 are fairly large. Since I haven’t done the ranking map for this, yet, I can’t really comment on it. Although I’m pretty sure this is where MGs like Negev start showing their power. Particularly on the other boss in Deep Dive, Garm. You’ll want as many combat echelons as possible, like Arctic, as well.

If you're looking for some specific T-Dolls to look into bringing, any of the team 404 T-Dolls (416, G11, UMP9, and UMP45) are a good choice because they gain a stat bonus in the maps. It's significant enough to warrant consideration, but not gamebreakingly so.

TL;DR: Get like 4 echelons that can do the damage, some with Armor pen. Be sure you can deal with some difficult night battles as well.

Utility is key for dealing with annoying red golyats. Force shields (Thompson, G36c), flashbangs (M9, UMP9, Type79, and ect), and smokes (UMP45, M1911, and ect) are all very good at dealing with them. Typically you’ll use flashes/smokes to allow for Thompson/G36c to run into all of the golyats at once with their force shields. If you can kill them via other methods, why are you reading this? Not super needed, but helps for making some maps easier.

Since we’ll have fairies by the time Deep Dive comes out, the only one you want in particular is the parachute fairy. It lets you cheese some maps. Otherwise, you just want them for stat boosts.