End of the Moonlight

Objective: Defeat the boss. (The Fail on the enemy Command Center)

Note: The one RF recommendation is due to how the boss fight with Fail works. You could also run a RF/HG echelon and it would work just fine.

The last map of the collab. Thankfully we don't have any strange gimmicks to deal with until the boss fight. This is a pretty cut and dry run to the enemy Command Center. You do need to take a Heliport on the way there to resupply, since you definitely won't have enough ammo/MREs to get through all of the enemies. You also need to defend your Command Center, so you want to leave an echelon there.

You can go either up from your Command Center or go to the right of it, it doesn't really matter. Either way you go, you'll need to take a Heliport. Problem is, you'll likely have to send two echelons to be able to take it. So the plan is to just send a dummy along with your main echelon so you can actually secure the Heliport. Once you've taken a Heliport and resupplied, you can rush to Fail.

Fail is a fight similar to uh...one of the end bosses of Singularity. No spoilers here. There's two main things about the fight that you need to know:

The first is pretty simple, just more enemies spawn in. However, because they out range Fail, they'll forever be behind her. This means ARs can not target them. Unless you have something like RFB with you, the enemies will stack up indefinitely. This is why it's recommended to bring either RF/HG or a single RF with your AR echelon. You'll be able to clear out the enemy's back line so you don't explode and die to it.

The second is Fail's skill, Oblivion. Oblivion is a debuff that covers your entire team. You'll be hit with pretty much a debuff to all stats (I actually don't know what she reduces, but it sucks) which will make your life pretty miserable. However, there is a counter to this. During her skill's duration, there will be two lights on the stage, an orange light and a red light. 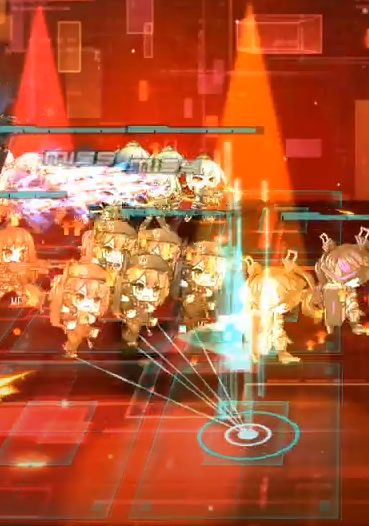 Yes, they're hard as fuck to see, get some glasses.

The fight's pretty simple if you can get Oblivion down. So that's about it.

This is pretty much the same as normal, but I will say that Fail is A LOT MORE BUFF in EX. She's pushing nearly 300k hp so I hope you're ready for a long fight. The mechanics are the same, so if you need help with that, look at normal. The enemies here are also no slouches, so you may need to have another combat echelon help you fight to the Heliport. Remember that you can also repair there as well.

Videos of me clearing this map on normal and EX