Before we get into the details of how calibration and enhancement works, let's first get around to how to unlock them. Both functions are accessed from the research menu, which you unlock at Commander Level 12. After that, you need to complete World 1-4 Night for Enhancement, and 2-4 Night for Calibration. Unlocking those is done by completing the story and subsequent emergency chapters,

With that out of the way, let's explore what they are.

Equipment upgrades increase the stats of equipment by a given % (the parameters and how much they increase by will vary by equipment type). This is based on the item's base stats which can be altered by Calibration.

Calibration = Adjust's the item's base stat

Enhancement = Boosts the stats by a % based on the base stat.

These 2 are completely independent and can be done at anytime. You can have +10 uncalibrated gear and +0 max calibrated gear, they'll all be the same when they're done.

Now that we know what they are, let's explore how to actually do them. Actually, its pretty easy. Just go to the Research screen and there's tabs for them. First, enhancement.

Here, being fed some items  (4 2 stars) gives it 200XP (as mentioned 2 star equipment gives 50item XP each). The resource costs to upgrade depend on the item's type. The XP required depends on the item's type, rarity, and whether or not it's a unique gear (Unique Gear costs 3x more XP to level, such as for example, the .300BLK ammo we've been using as a demo.) 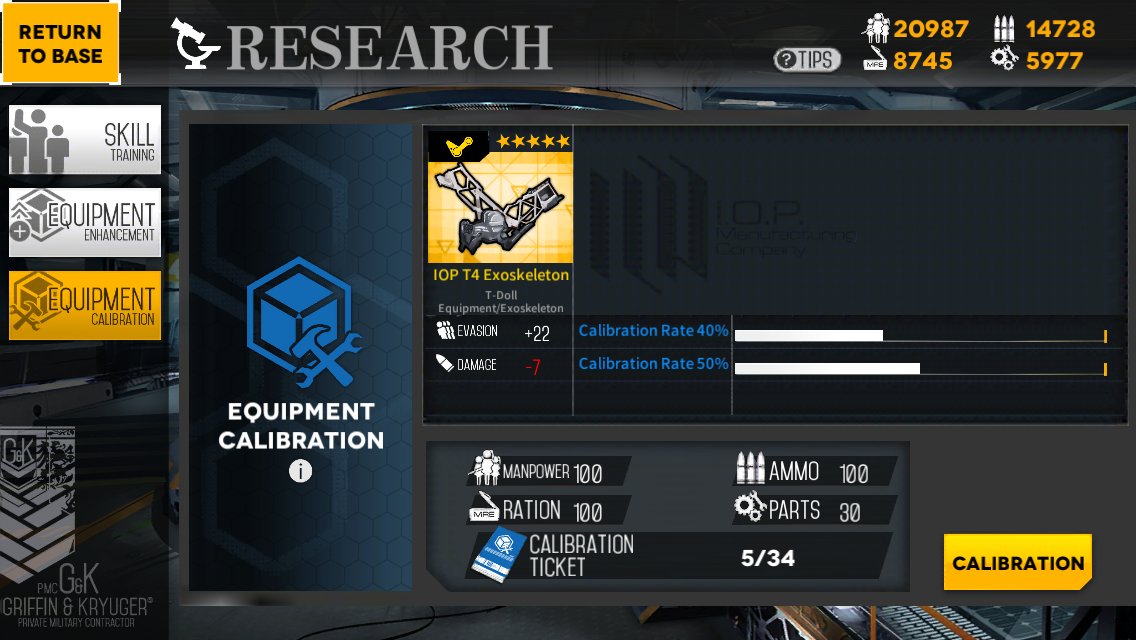 Items have a threshhold of minimum and maximum stats for a given category. An item has a total stat count that goes up as you calibrate it. However, the stats can go jump from 1 stat to another. 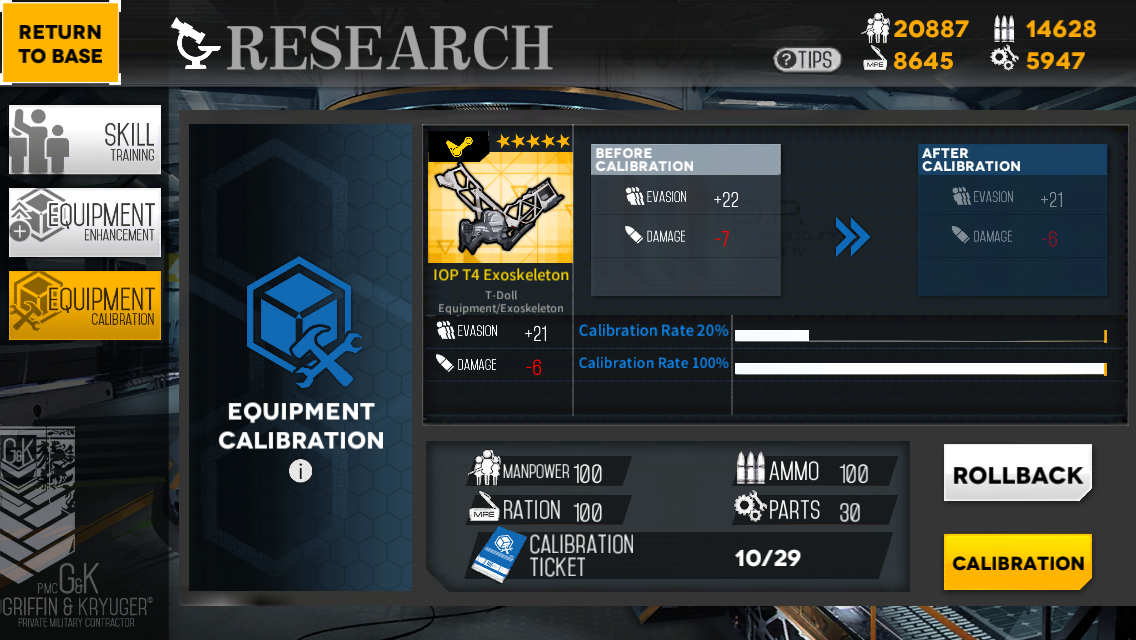 As seen there. The TOTAL amount of stat never goes down though.

Everytime you hit the Calibration button, it will attempt to increase the stats of the item and redistributes the total stats. Sometimes the total stat doesnt go up, but again, because this comes up a lot, the TOTAL WILL NEVER GO DOWN. Eventually, through luck or sheer tenacity, the item will eventually cap out all it's stats. You will know when the bars are all filled and it says MAX on the side.

Rollback resets the most recent calibration in this session (but its locked in once you leave the screen), but there's generally no reason to do so unless the item stats got distributed wildly and you need the item absolutely immediately with zero delay, while having no more calibration tickets, so it should basically be very rare if you're sensible.

Calibration Ticket cost starts at 5, then 10, then 15 for all subsequent calibration attempts. If you're very lucky, it wont take that many, but calibrating everything can get expensive quick.

And that's it. The difference between uncalibrated +0 gear and fully calibrated +10 gear is massive, and as the game gets more content, this stuff becomes more and more important to give your dolls an edge in the battlefield.