Fairies are a type of equipment only made through heavy equipment production. Like equipment, they can enhance your T-Doll's performance, but they also have unique skills and benefits depending on the fairy you're using.

They're also not actually fairies, but Persica is weird and made them fairy themed. They're actually just drones. Totally not eldrich abominations

The fairy system is, at its root, just another type of equipment you'll be using. Just like equipment, fairies modify stats; what makes them better, though, is that they modify stats by a percentage. This can give you a large increase in your combat effectiveness, since the percentages can be quite high. As an example, one fairy boasts a 55% increase in damage.

The amount of stats you gain is determined by the fairy's level and rarity. Meaning, you need both a high rarity and level to get the most out of your fairy.

Please don't make me edit this again. I've had to emphasize this more and more.

To further clarify, leveling a fairy increases the % buff you recieve from it. From there, rarity cuts that % buff by a set % that's determined by the rarity. You can look at the chart at the bottom for exact numbers on the cut.

The stat percentage bonuses factor in decimals, despite the client culling them from the display. It rounds the number up in the display to appease everyone's ocd  show a nice round number, but it does not affect gameplay. (So M16 does not gain a point of base armour, despite what the formations screen says.)

The level and rarity of a fairy is a system on its own. Meaning, it's something that isn't determined when rolling a fairy. First, levels work similarly to T-Dolls. You'll fight in combat and gain exp, the main difference is that the exp gained is a portion of the battle's exp. The portion's amount is determined by a building in the fairy room. You can also give fairies combat reports, just like T-Dolls. As for rarity, this is completely unlike rarity in equipment or T-Dolls. To put it simply, it's akin to enhancing equipment. You feed fairies into other fairies to gain points towards the next rarity. Do keep in mind that level also limits rarity. If your fairy is too low level, any extra stars on it will be hollow and not give its benefits until you reach the required level.

Talents are essentially the random part of the fairy, like how equipment can roll different amounts of stats. They do various things, and each unique fairy has a different set of talents. They're active for the whole duration of the battle.

Talents have a chance of activating in battle, the percent chance of it being determined by the rarity of the fairy and the talent itself. Higher rarity fairies have a higher chance of activating their talent. At 5 star, you'll always activate the talent. If you think that's a lot of stuff for one thing to provide, it is. But wait, there's more, fairies aren't just limited to stat increases.

The other thing fairies can do is provide you with special skills. These skills (and the fairies themselves) are divided into two categories, Combat and Strategic. A stragetic fairy skill could be something like letting you move an echelon to heliport anywhere on the map or giving you extra vision on night battles. A battle skill is something happens during a battle that assists you, something like calling in a bomber to drop bombs on an enemy or giving you a robot dummy that takes hits for you until it dies. A good rule of thumb for differentiating between the two types of skills are if they activate inside or outside of battle. Strategic fairies are outside of battle skills, while battle...activate in battles. The good fairy skills are immensely beneficial to have, and can make the difference for a strategy working or not. There is one limitation, though.

The one thing limiting you using these skill is your supply of fairy commands. Each use of a fairy's skill uses up an amount of fairy commands. The amount varies between fairies, but you can assume it's between 1 and 5. Fairy commands are a resource that can only be replenished by waiting six hours to regain an amount determined by your fairy room level or by certain achievements. Strategic fairies also have an additional limitation of having a cooldown after use. They can be reused after a set number of turns; the amount depends on the fairy. Additionally, if you note the picture below, you have an option to "auto use fairy skills". This activates for battle fairies only, but forces an activation of their skill each battle while the option is turned on.

In map UI for fairies 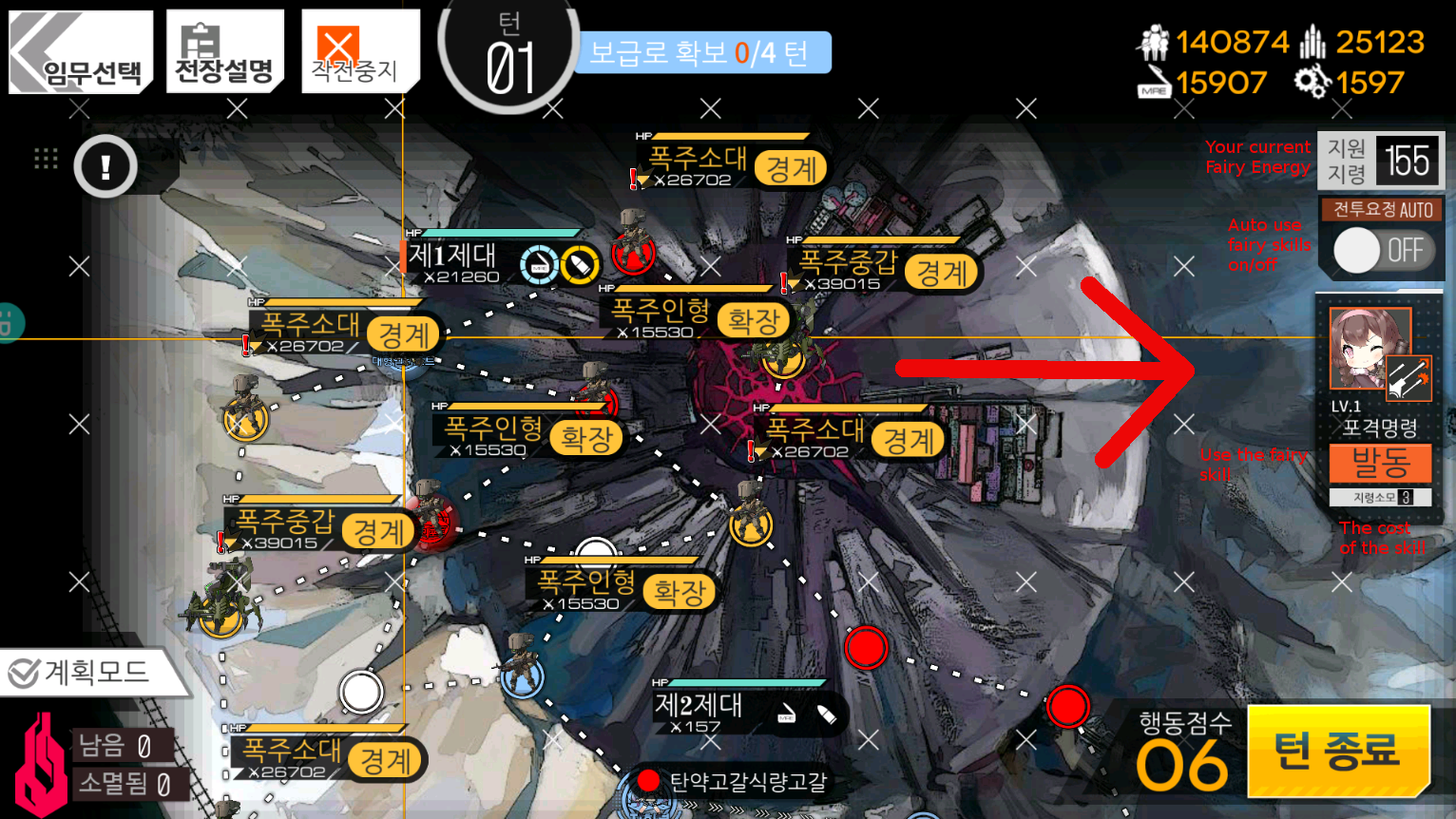 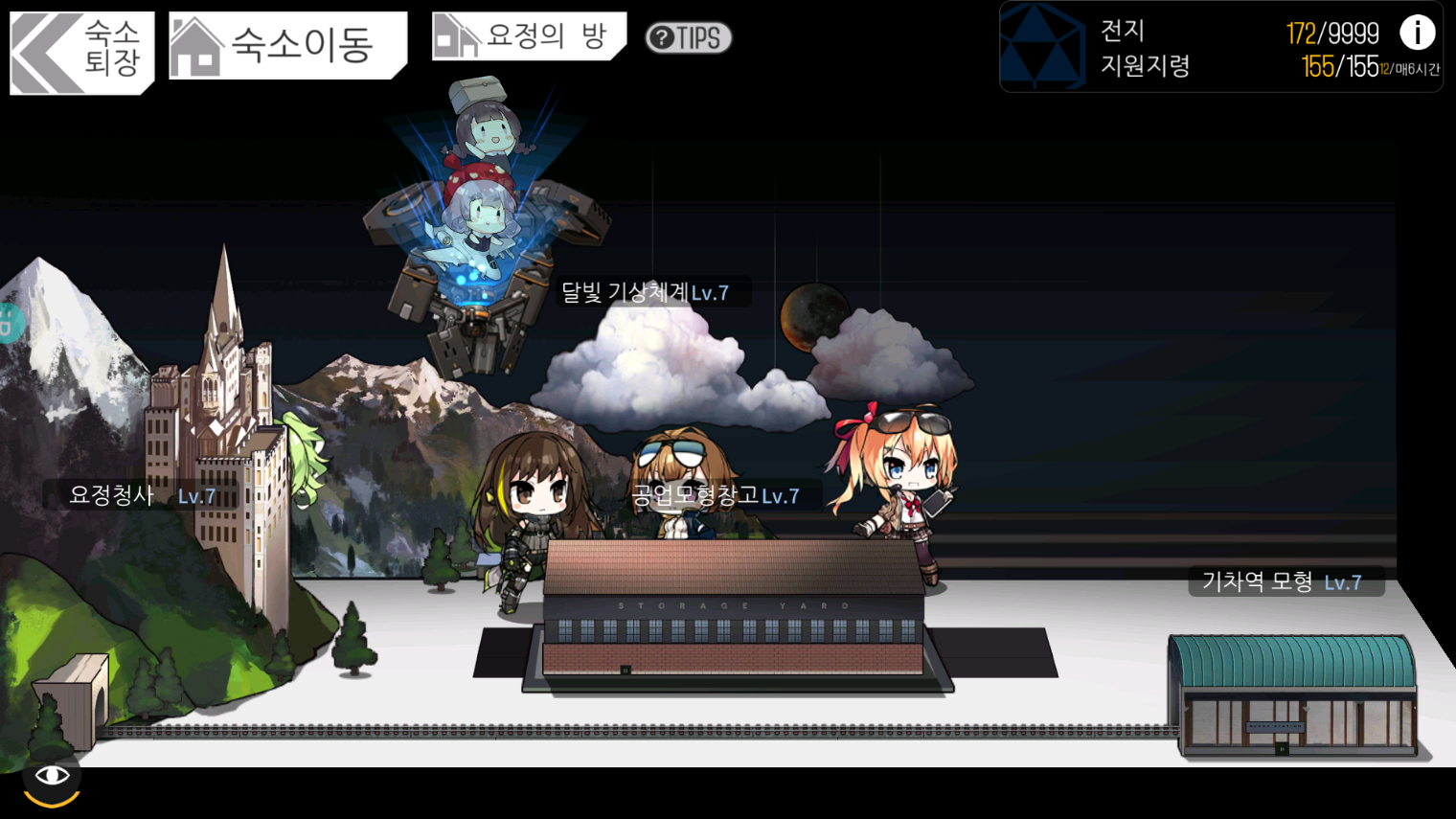 Each structure does a different thing:

The model fortress doesn't actually do anything but is required for the other 3. The maximum level of the fairy structures is limited by the fortress.

The model warehouse determines the maximum amount of fairy commands you can store. While you can go over this via achievements, it will not regerate over this. At lvl10. it stores 200.

The model railway determines the amount of fairy commands you gain every 6 hour cycle. At lvl10, it restores 15 per cycle.

Fairies are only produced from heavy equipment production. This functions just like the T-Doll version. You sign away a ton of resources, cores, and contracts to maybe get a very strong item. Unlike heavy T-Doll production, however, you won't be signing away your resources 6000 at a time, thank god. Most fairies can actually be made from the minimum resource cost of 500 of each resource. You even have a good chance of getting one from it at tier 1, the percent chance of getting one is around 20%. However, there are fairies that require you to hit a resource threshold before they can appear. These are: defense fairy, support fairy, parachute fairy, landmine fairy, rocket fairy, and construction fairy.

For most of them, you'll just be doing the base resource cost requirement at tier 1.

Heavy Construction Tiers and Their % Chance of a Fairy #

Skill training for fairies works exactly the same as T-Doll skill leveling. The main difference between T-Dolls and fairies, is that fairies take more data and more time to skill train.

Enhancement is the rarity up I mentioned back in the basics section. You feed fairies to another fairy to increase its rarity. There's a few rules that change the amount of exp you can gain for a fairy in this process. First, fairies with the same name, e.g: Command Fairy and a Command Fairy, will give more exp. Second, fairies that have the same talent will give even more exp. Most people will only match the same name of the fairy when doing enhancement as it's quite expensive to match talents. Doing enhancement without at least matching the name isn't a good idea. Without that bonus, you're only getting 10 exp to the next rarity, while matching the name alone will push that up to 100 exp. If you do decide to match the talent, it'll push the exp gained to 150. 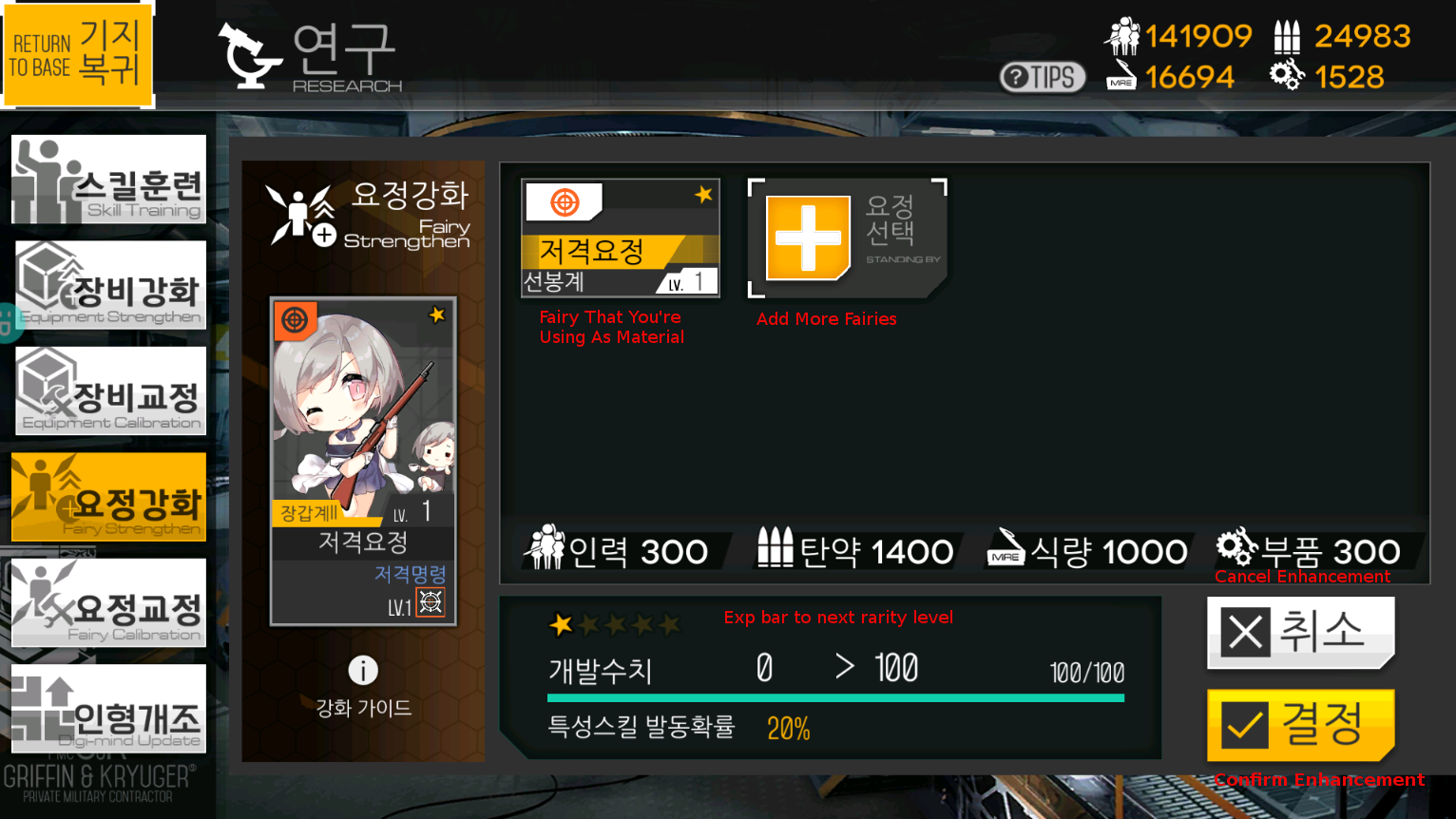 As I mentioned in basics, if your fairy doesn't have enough levels, you won't gain the benefits of the rarity the fairy is actually at. You'll just get hollowed out stars that will get filled once you get to the level threshold. 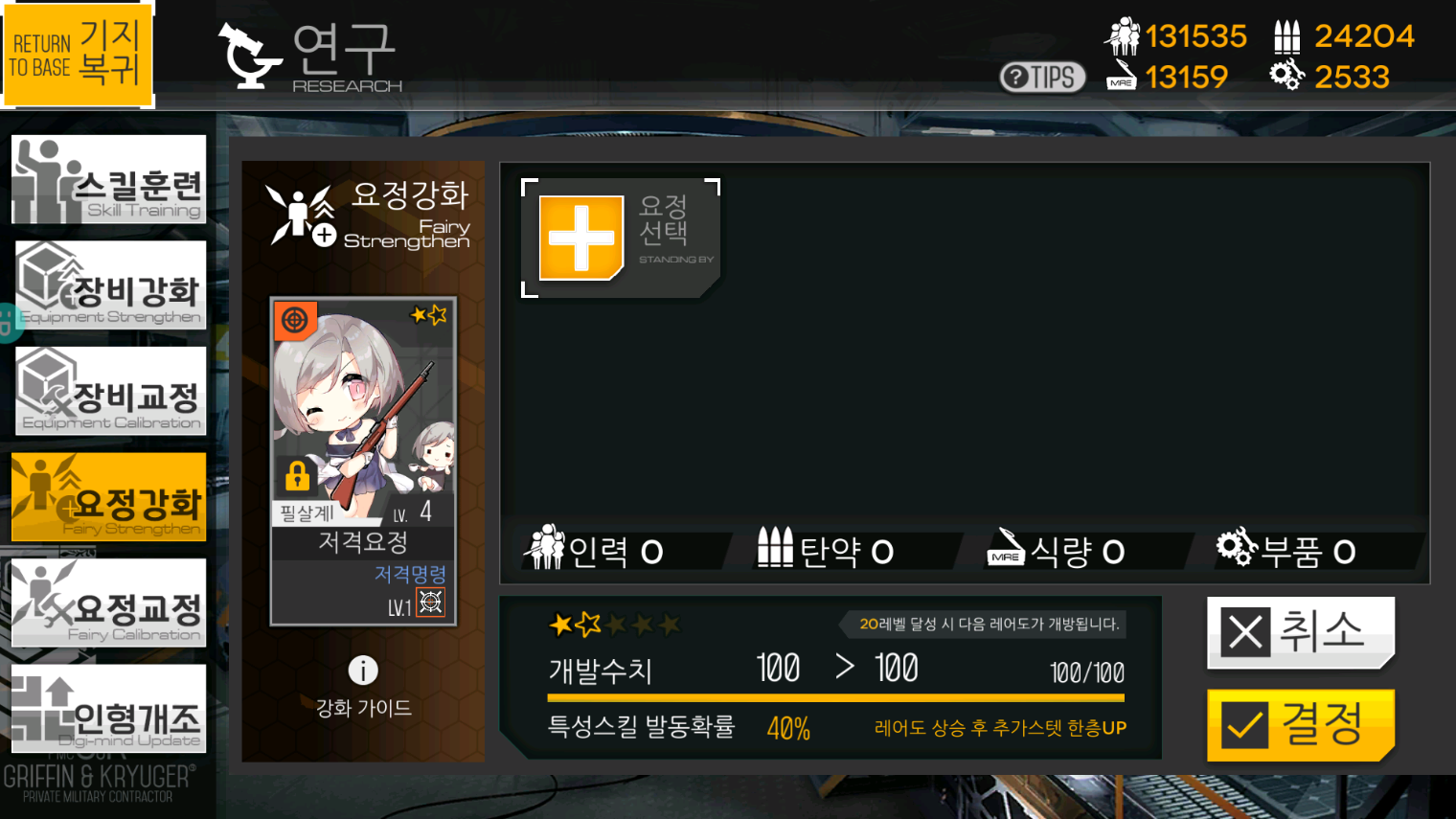 Calibration is a method to reroll the talent on a fairy. Pretty cut and dry. The resource cost on this is pretty steep, it takes 60 calibration tickets, 600 manpower, ammo, mres, and 200 parts. If you don't like the talent you've rolled, you can revert to the talent you had before doing the reroll. 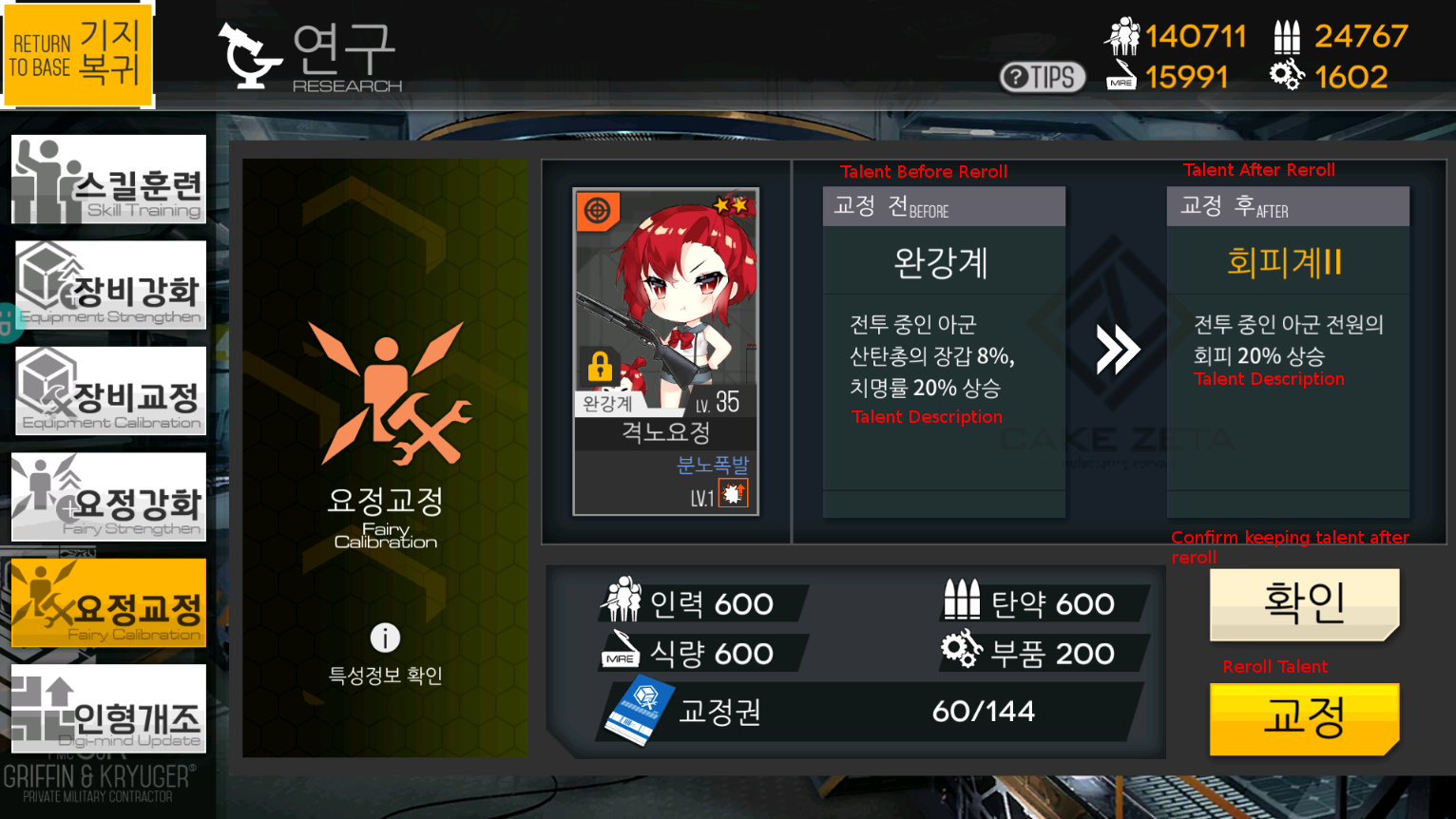 Until the talent evaluations come out, the rule of thumb for talents is: unless you know what you're doing, stick with damage I/II or fervor. They're good in pretty much every situation. The armour fairy can totally use the armour talent too, though.

Table of Exp Requirements for Rarity and Levels#