With the Neural Upgrade system announced in EN, it's time to stop calling anything related to modding T-Dolls mod 3ing them. Cause I don't want to be answering the question if it's a separate system. It's the same thing, mod 1 and 2 gotta happen before mod 3.

PS: You need to be Commander Lv 60 or higher to unlock this.

PPS: Because this is important, and god knows no one will read past the basics section...Be sure to oath the T-Doll you're gonna mod if you can. It doubles the exp gained from all sources while going from 100 to 120. 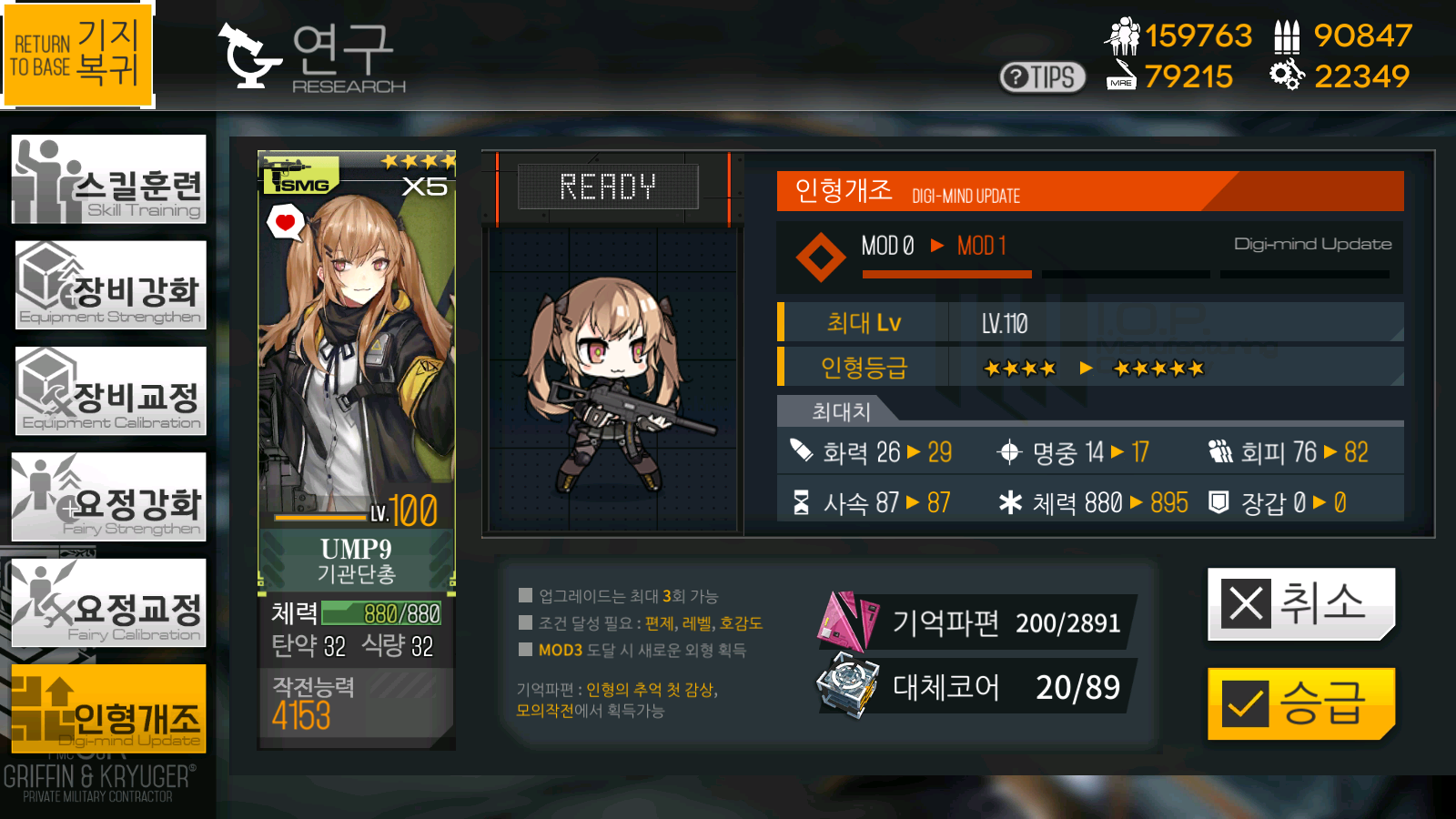 Modding a T-Doll via Neural Upgrade essentially pushes their level cap up as well as giving them other benefits. While vague, these other benefits are usually insanely good and can push a T-Doll from being garbage (hi Micro Uzi) to actually being something people want for their power. These benefits come at each tier of mod. This tiering is where the terminology of mod 3 comes from. Essentially, you have mod 1, mod 2, and lastly mod 3. Mod 1 is the first stage, which pushes the level cap to 110, mod 2 makes it 115, and mod 3 makes it 120. You'll need to hit the level cap and have max dummy links/affection to mod or proceed to the next stage of the mod, as well as have cores and the new currency introduced with the Neural Upgrade system, Memory Fragments.

These fragments come from that Combat Simulation that's been always locked since the start, the Neural Corridor. It's basically an upgraded Enhancement Combat Sim. You go over some random nodes and then fight an enemy for your Memory Fragments. 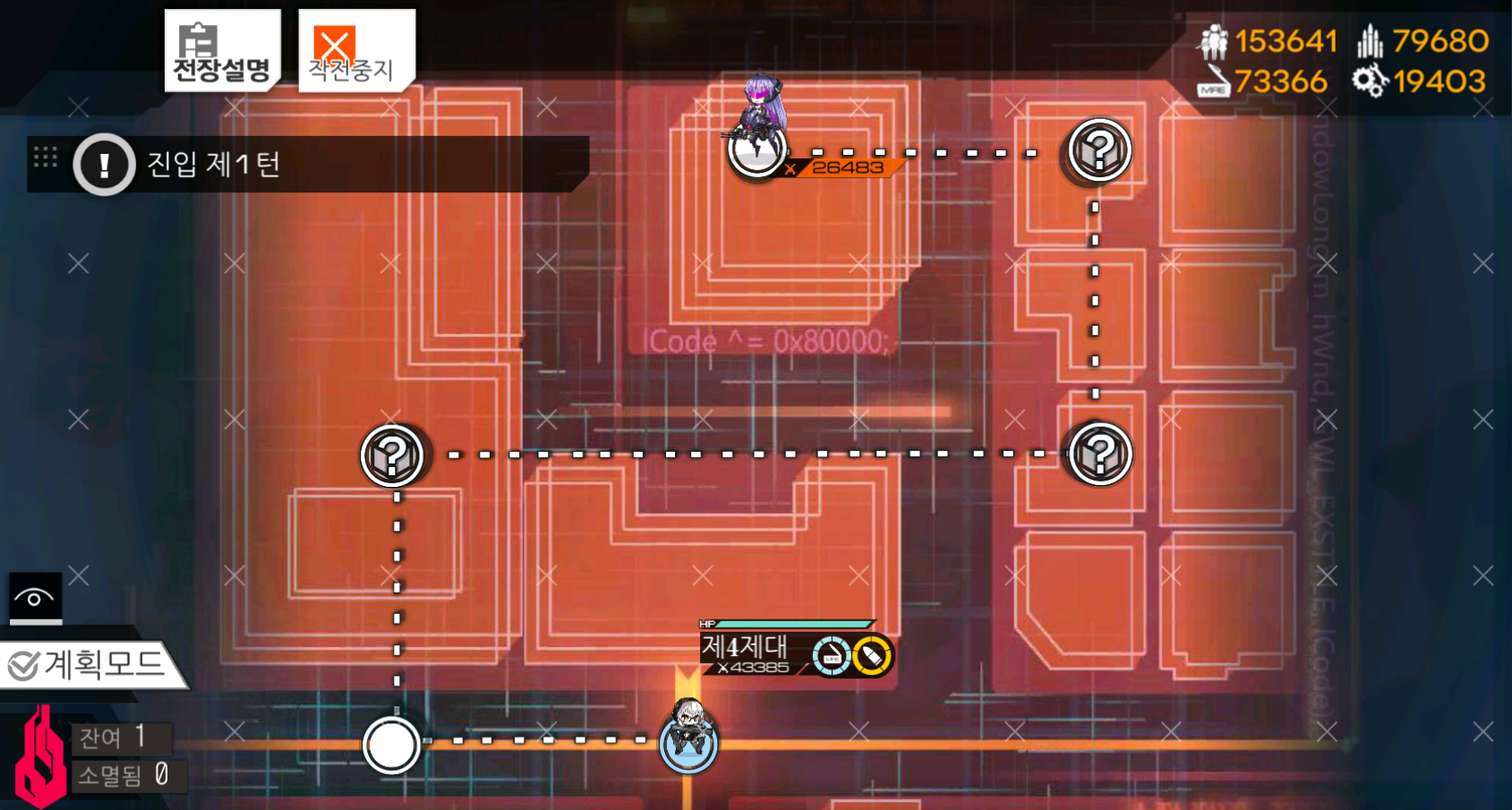 Also like the Enhancement Sim you can get the items you're running the sim for from the random nodes. Neat. RNG. Anyways, from the advanced version of the sim, you'll get a whopping 30 Memory Fragments per clear. This can go up to a total of 60 if you're lucky with drops from the random nodes(10 per). Did I mention you need thousands of these? Have fun.

Anyways, once you've gotten all that stuff ready, you're set. Go over to the Research section and head over to the Neural Upgrade tab. Pick out the T-Doll you want and you can then proceed to mod them. Do this for the next few level caps and you'll be able to finish out your T-Doll at Mod 3 with their (probably cool) new art.

Ok, so you want the not adhd version of this. Be sure to read the basics first. First up, let's talk about mods themselves.

These are mostly made for story T-Dolls or weaker T-Dolls to attempt to push them to viability. Each mod stage gives the T-Doll you're modding unique benefits that are pretty static between any given mod. Also note that each stage of modding will give additional stats.

The most obvious thing mod 1 will do is push the rarity of the T-Doll up; 2 and 3 star T-Dolls will go to 4 star, 4 star T-Dolls goes to 5 star, and 5 star T-Dolls go to 6 star. However, mod 1 has two additional effects that go along with it. First, the skill of the T-Doll will get buffed. For example, AS Val's skill goes from a 180% damage boost to a 200% damage boost. Second, the tile buffs get buffed and sometimes changed. AS Val's tile buffs goes from a 25% FP 10% ROF buff to a 25% FP 15% ROF buff as well as gains an additional tile that gets the buff. In some cases, it can even buff additional types of T-Dolls. MP5 actually buffs RFs as well as ARs once she gets modded.

Mod 2 is where the majority of the strength of modding comes from. Here, they'll gain their second skill. Yes, T-Dolls will get a second skill, and yes it eats your data. Not much to say about this in a general sense, the skill given isn't really different from any other skill. You level it the same and usually, but not always, the skill just activates when the first skill activates. Not much thought needs to be put in here. Any specifics about the skill would be talked about with the T-Doll, rather than here.

Mod 3 is what most people think of when you're modding stuff. Here you're gonna be getting the updated splash art, updated chibi, and their special equipment. A lot of the special equipment aren't too game-changing, so you're not actually gaining a ton of power here. Some are definitely super worth going for, but a lot aren't. Just be aware of what each equipment actually provides if you choose to rush a mod 3. The one other "major" thing that you get when you mod 3 something is that the cap for affection goes up to 200 if you've oathed the T-Doll. Yes, you also get an additional affection bonus once you get to 190 affection. Woo. A little extra stats. It's nothing too huge, but it's definitely something. Just be aware of the costs of going to mod 3 on a T-Doll, cause it can get pretty high.

The amount of resources needed to actually do any given mod depends on the base rarity of the T-Doll. Here's nice bunch of tables to show the requirements per rarity.

Yeah, remember when I said you can get up to 60 Memory Fragments per advanced sim run? Yeah. Have fun. Just be happy that it's open every day.

Okay, so now that you can totally mod a T-Doll...You should be good, right? No? How the fuck is the best way to go about this? ok ok, we can keep going. Let's start with leveling.

First off, leveling is still the same as per usual. However, there's a few things about going over Lv 100 that you should know. I think the first one should be pretty obvious. You need way more EXP to get levels as you get higher level. Here's a nice table showing how much EXP you need per level:

The second thing you need to know is pretty simple and I already covered it at the top. You gain double exp from ALL sources once you've modded a T-Doll that's oathed. Those CR numbers needed to level? Cut that in half. The doubled exp gain even counts for that. Highly recommended to oath moddable T-Dolls if possible.

Bear with me for a second. I know how it seems, "It's just upgrading T-Dolls, what kind of strategy could there be?" It's definitely a bit odd, but this is entirely warranted. There's a fair few people that are under the impression that you should rush a mod 3 ASAP. This is not a good idea unless you're loaded up with Memory Fragments. This is due to the majority of the power in a mod coming from them hitting mod 2 and gaining their secondary skill. It's far better to have multiple units at mod 2 than to have one at mod 3, especially if EN gets the high value mods early on. The cost of a mod 3 is very high in comparison to the benefit it gives.

If you ask me "what should I mod first" I can't give you a good answer because that depends on who's available for modding. You gotta get a proper evaluation that's fitting for the time period we're in to decide that.

Not gonna lie, this part is just for little tidbits that doesn't really fit anywhere because I'm a bad writer.

Mod stories: These are located in the Cafe. Here you'll get to see the T-Doll's backstory in a nice cutscene. You'll unlock a cutscene when you have the T-Doll in your armory, as well as after every mod stage. As a bonus, these give you Memory Fragments! Be sure to check them out.

Mod equips: These are NOT ALWAYS a good thing. Something like BAR's special equipment can actually lose you DPS. Once you've gotten a T-Doll to mod 3, they'll automatically equip to your T-Doll, so be sure to check their equipment.

Logistics: Yes, a modded T-Doll will give higher great success rates. Their level is higher.