There seems to be a bit of a lack of understanding from newer commanders about what night battles are. Some may even think it’s this scary thing that’s fairly hard. Truth is, they’re very simple.

There are a few small changes between day and night battles. You have no command center, so you don’t need to worry about that being taken and you also have a limit on how many echelons you can deploy at a time.

The big difference, however, between night battles and regular battles is that night battles don’t have a “capture the enemy HQ” objective. They’re split into either destroying all enemies on the map or killing a specific enemy. This objective is made harder through night battle specific “problems”. First one is restricting your vision on the map as to make it harder to find the targets you’re looking for. The second is having an accuracy penalty (-90%) on all t-dolls. There are, however, ways to fix these problems.

For the problem of vision, you have three methods of increasing it. The first is having a handgun in your echelon. This lets you see one tile around you, giving you at least some vision. The second method of increasing vision involves taking a radar tower node. 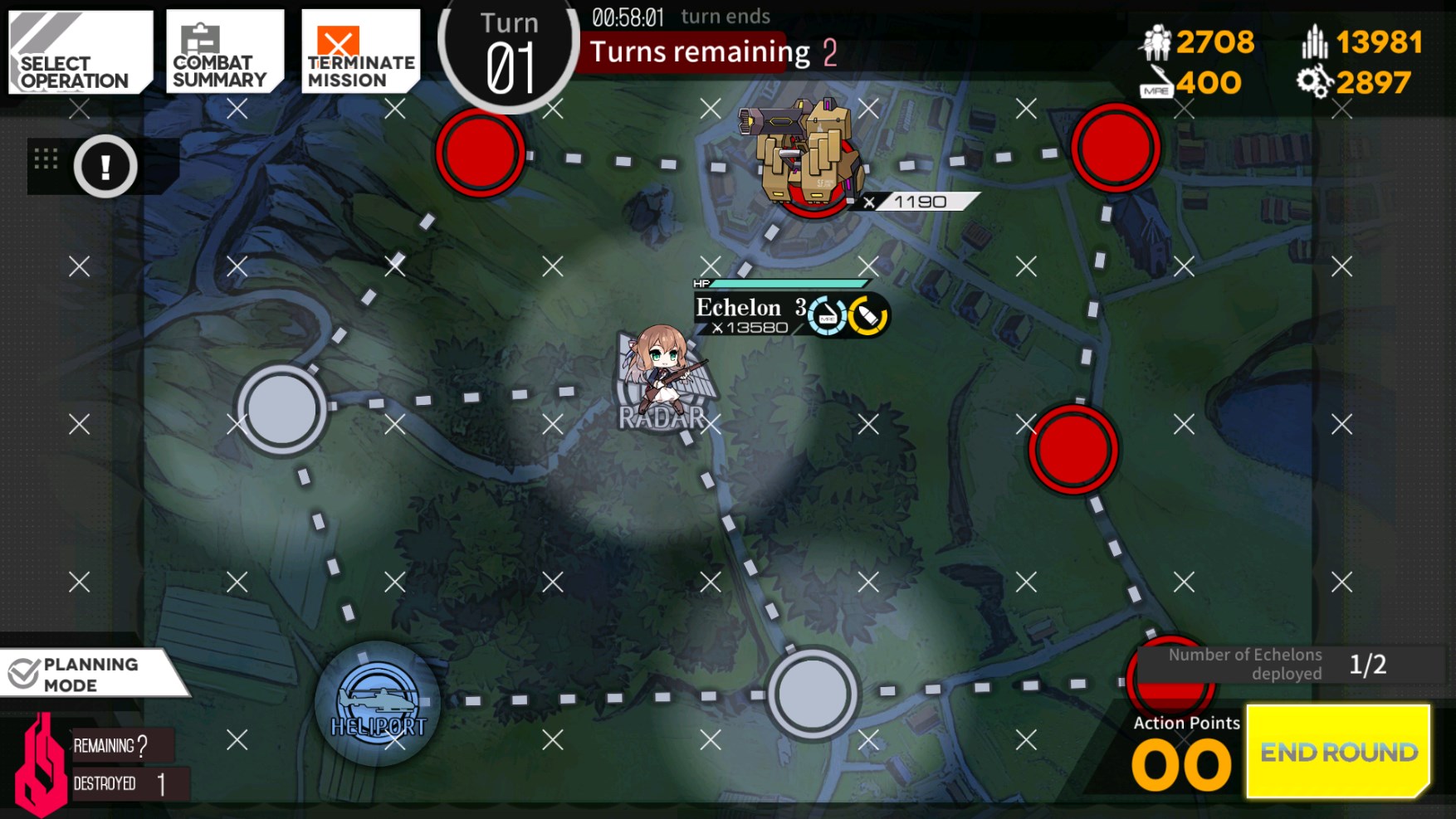 This gives you two nodes of vision around the radar tower while its under your control. This should give you enough vision to complete whatever mission you’re doing. 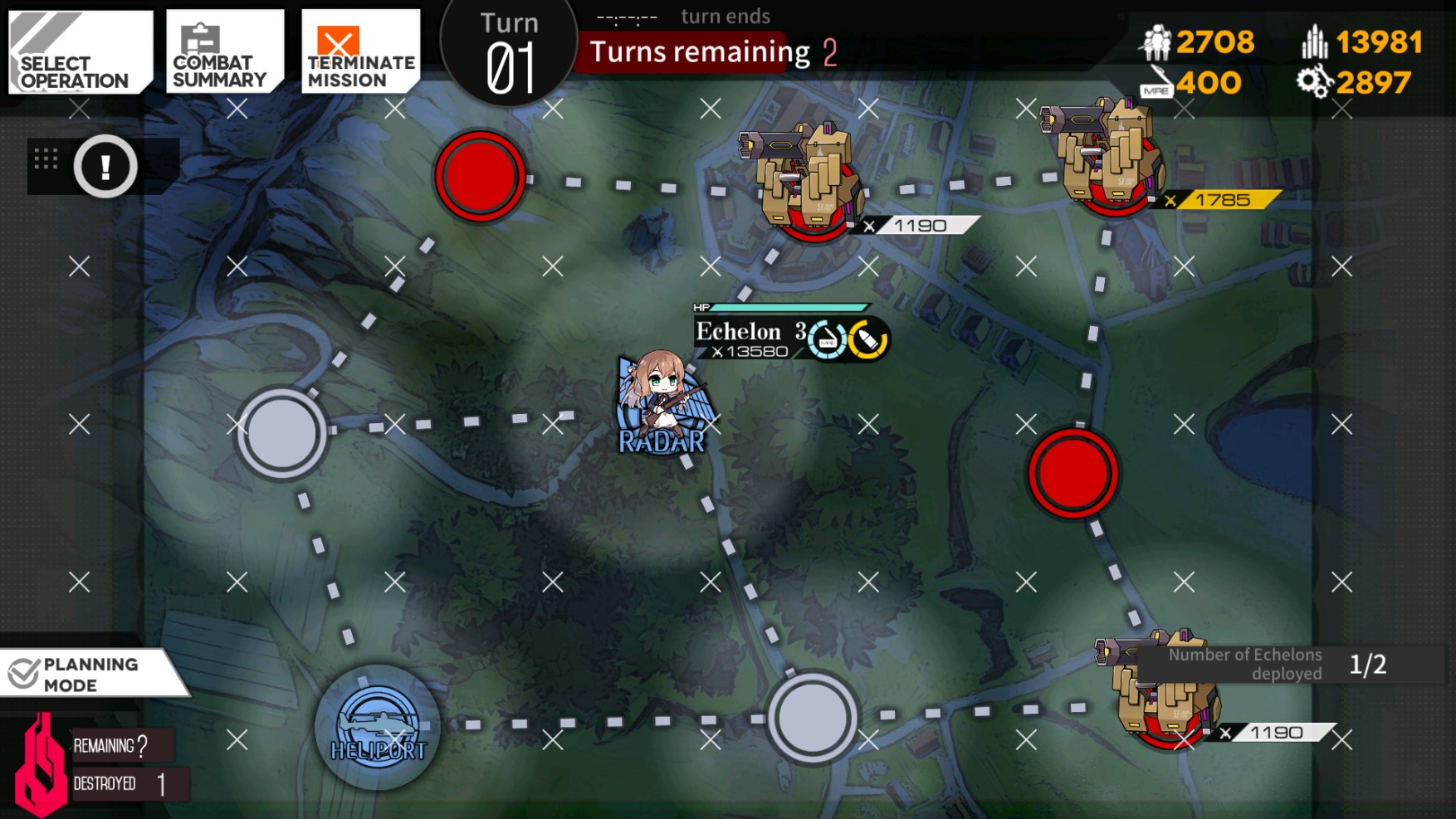 For players that can obtain fairies, you also have the option of Illumination Fairy. 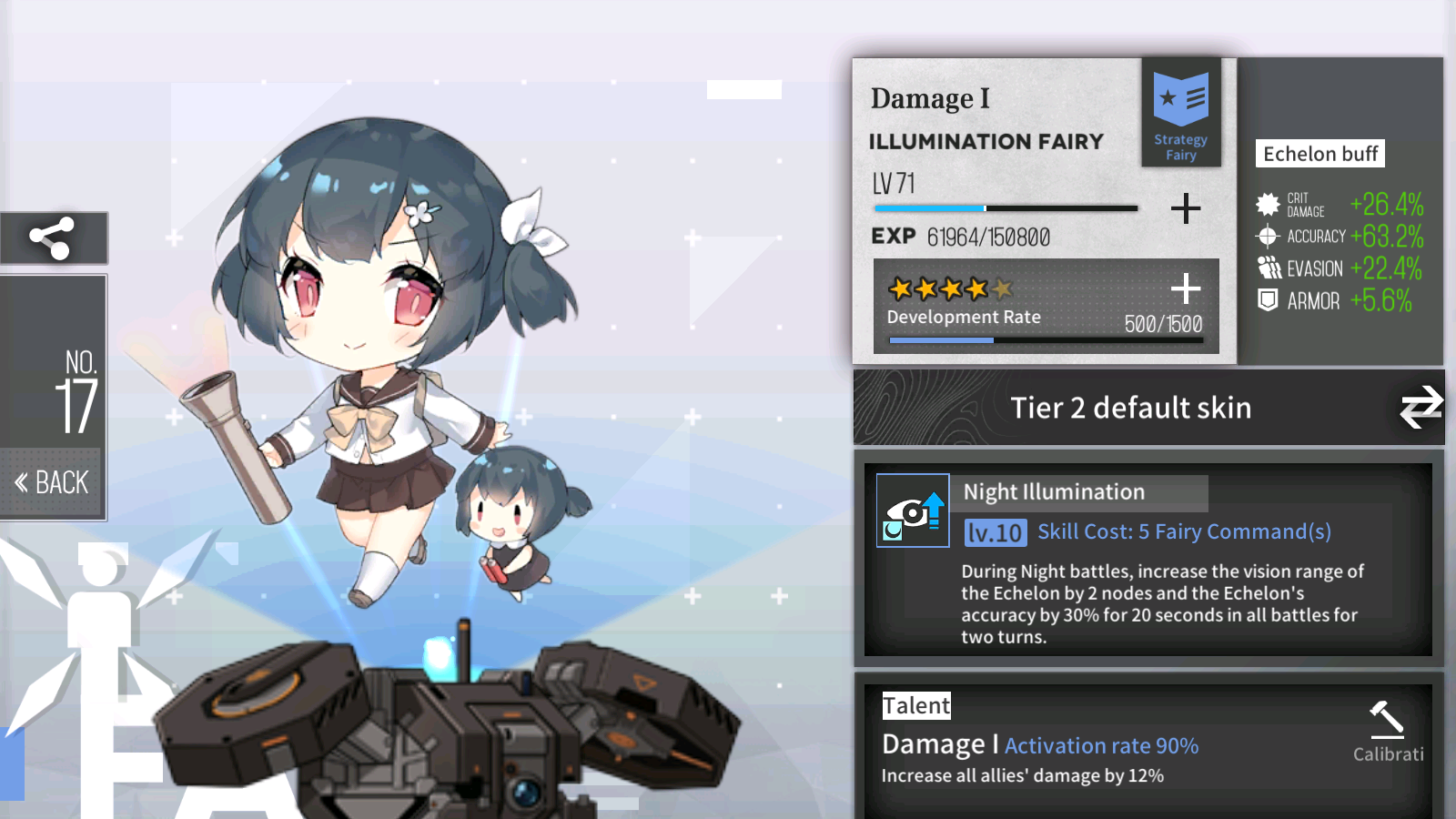 This fairy will increase your vision range depending on the skill's level. All the way up to two nodes, giving you a total of three vision range with a handgun in your echelon and the skill active. Real useful.

As for the problem of accuracy, there’s an easy way to mitigate the -90% accuracy debuff. You have equipment specifically to restore a percentage of the accuracy lost during night battles. For example, a five star max calibrated PEQ units will negate the penalty entirely. Whereas a four star one could reduce the penalty by 80%. In the 80% example, you’d have a 18% accuracy debuff left over. Keep in mind that this is calculated per t-doll, meaning you need to equip a PEQ unit on every t-doll that can equip it. 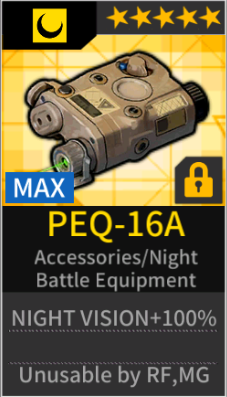 Do note that both MGs and RFs cannot equip PEQ units. RFs, however, have high enough accuracy to where this isn’t too big of a problem. MGs, however, have very poor accuracy, and will miss a lot during night battles. This isn’t an issue depending on what type of enemy you’re fighting.

In night battles, you’ll commonly see two types of enemies. One type is the general enemies you’re used to from regular battles. The other is armoured enemies that are currently exclusive to nighttime battles. Armoured enemies are special, they have armour (duh) that reduces damage done to them by t-dolls. This can be bypassed through a few methods, one being armour penetration and the other being explosives. Armour penetration rounds are generally exclusive to RFs and MGs, giving them a large role to play against these enemies. 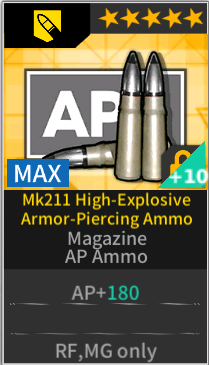 Despite MGs not being able to equip PEQ units, they can still deal with armoured units. This is due to armoured units generally (there are exceptions, seriously, careful with using MGs around these) have roughly zero evade.

While there are quite a few things you need to adjust to in night battles, once you get used to it, you can easily clear most maps.

PS: Flare sucks. Don't use it. To take from the accuracy notes from Katyusha... "Now the time of day modifier there is pretty much "1" during normal missions, so it basically never comes up. At night however, It's (1 - (0.9  * (1 - night equipment )). Effectively, a baseline of -90% acc when the unit lacks Night vision equipment (which by model number is actually an IR Laser pointer, but calling it NVGs is easier). Thus, NV equipment doesn't actually give you MORE acc, but restores accuracy you would have lost from the night battle penalty (so a 97% calibrated NVG restores 97% of the accuracy you would have lost).

Immediately however, a problem also arises. Because skills are a separate multiplier, this means things like Flare arent useful, as the -90% are counted against it still, and its a multiplier, not additive! This means that a max rank Flare skill, giving +100% more acc (effectively a multiplier of x2) thus only gives you 100% * .1 = 10%, * 2 = 20%, NOT a boost to 110%. This effectively makes it COMPLETELY USELESS.  "