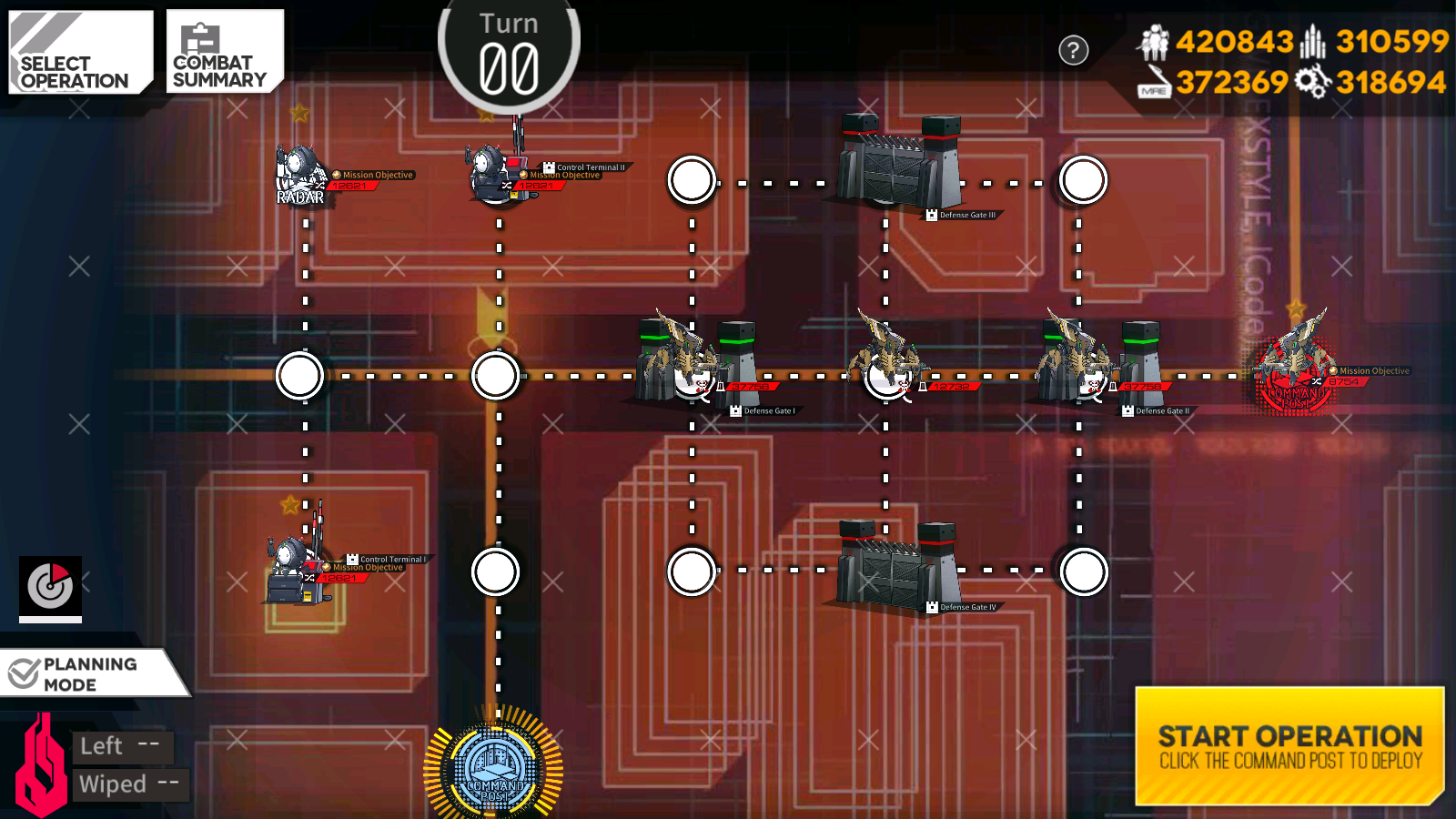 For this map, we need to control the gates in a certain way to make sure the tougher Manticores don't bother us as we go through the right side of the map. We need to change their AI via a radar tower, and fuck with the consoles that control the gates so they're not in the way.

For turn one, we can't really rush to the first gate console, since we'll be in alert range of one of the Manticores. So, move just one node up and then deploy a dummy echelon.

On turn two, go all the way up to the console that's north of your Command Center. Move your dummy echelon up one node for later.

For turn three, use the console to open up defense gates III and IV so the Manticore in the middle can have somewhere to go. After that, you'll want to head over to the Radar Tower. Stepping on this Radar Tower changes the AI of the Manticores from alert to patrol. This will allow us to get through the three of them.

On turn four, go to the console below you. This console controls gates I and II. You'll want to close both of those doors, as you have the Manticores where you want them right now. Use the remaining AP to deploy another dummy echelon.

On turn five, send one of your dummy echelons to the console your combat echelon is chilling on. We'll need them to open the gates when we're ready. Move your combat echelon into position next to defense gate I to rush the enemy Command Center next turn. Once turn six hits, open the gates and rush to the enemy Command Center to capture it and end the map.

For this objective, we need to kill as many enemies as we can, but we can't touch the console north of our Command Center. To accomplish our goals, we need to kill all of the Golyats and two Manticores. We can slam one of the tougher Manticores with a gate, so that's no issue, but you will need to deal with a 12k CE Manticore echelon. It should be fairly doable, but if you're struggling, consider baiting it into the gate and slamming it on the Manticore as well.

So to get this going, our first order of business is to start clearing out the Golyats and to get to the left console to use the gate. For turn one, we can't really be too aggressive at this point. So we'll just move up one node, and then deploy a dummy echelon from our Command Center. Turn two is when we'll rush directly to the console on the left. You should be able to take out most of the Golyats while doing this. We'll end the turn on top of the console.

On turn three, make use of the gate console to repeatedly slam gate I on the Manticore sitting between it. Once you're confident you've done it enough times, take your echelon and head to the other Golyat that's on the other console. Be sure to NOT use the console, as we need to have the gates it controls closed. So end the turn on top of it, and now we can finish this up.

The last turn is just going to the right side of the map and killing the two Manticores that we need to kill. The one we slammed the gate on is gonna be fairly weak, but the 12k CE one could cause issues if you aren't strong enough to beat it. If you can't, well, you have the option of baiting it into the gate and slamming it on that Golyat as well, but 12k CE isn't too hard to deal with. Eliminating the two Manticores afterward should end the map.