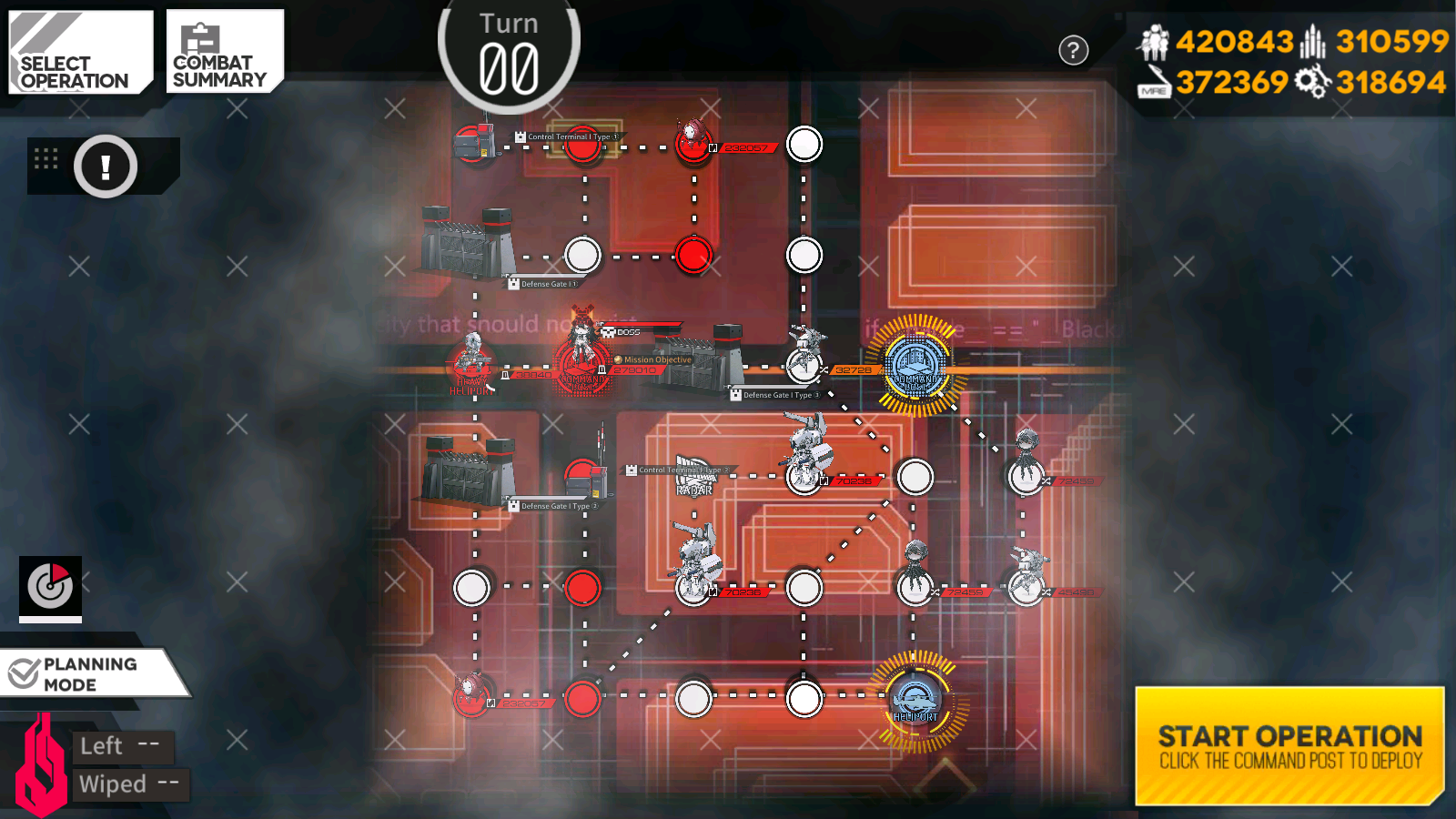 So we got a few things we need to do. First and foremost is defending your Command Center and Heliport you start with. There's quite a few enemies that have a chance of capturing either of those two things. Second, we need to open up the gates blocking our access to the Command Center/Nyto Isomer White. These can be opened via the two consoles at the top and bottom of the map. So...I guess let's get started?

As mentioned in the opener, we want to take care of all the trash enemies around that can threaten us. So, first things first, let's do that. Deploy your two combat echelons to start. From your Command Center, take out the Rodelero to the left. Deploy a dummy echelon there and swap back your combat echelon to your Command Center. Next, move your other combat echelon up to take out the Isomer. Deploy a dummy echelon at that Heliport as well. This should end turn one.

On turn two, we have a good opening to get to the console at the top of the map. Move your dummy echelon that's next to your Command Center to it. Use it to open the upper gate. With your remaining AP, move the combat echelon near your Heliport to the right one node. That should ensure you clean up the last remaining threats to your Command Center.

For turn three, we don't have much to do here. We want to set up for turn four and five to use the other console to open the other gates, but that only requires a couple AP. Move your dummy echelon on the Heliport over to the left two nodes, any more and you risk alerting things you don't want to. With the rest of your AP, move the other dummy echelon back towards your Command Center.

On turn four, move the dummy echelon on the bottom side of the map to the Radar Tower. Stepping on it will despawn the Strelet+ on the Heavy Heliport. Which is pretty nice for this objective, and in general too; fuck those guys. Since we don't have enough AP to both grab the Radar Tower and go to the console, we'll have to activate it on turn five. Move your dummy echelon back towards the loop with the red Golyat patrolling so we have easy access to the console next turn. Be aware of the alert radius of the red Golyat when you do move back.

On turn five, we can now use the console to open both of the remaining two closed gates. Do so, and now we can set up the end of the map. If you so choose, you can sacrifice your other dummy echelon and get the Nyto Isomer White to move this turn by standing on the node next to it, setting you up for a win on turn six, but I don't do that. I start baiting on turn six by standing on the node to the left of my Command Center. Then I move in to capture the Command Center on turn seven with my other dummy echelon. Your call; either way, that should wrap up the map when you capture the enemy Command Center.

Instead of passively having the enemies walk into you here, our turn two start will have us engage the remaining enemies by our Command Center. Clear whatever's left using your echelons, hopefully just one enemy next to the Command Center, and then move back to your Command Center. Swap with your dummy echelon and then head up to the top part of the map with the red Golyat patrolling around. You should have enough AP to walk past the red Golyat and get near the console, but not quite enough to use it.

That's for turn three. Move to the console and use it to open the upper gate. Then you'll want to move that echelon to the top right corner of the square that red Golyat is patrolling, outside of its alert radius, so it is not liable to be trapped. Move your other combat echelon away from the Gundams that are probably next to it. With that echelon safe, move the dummy echelon on your Heliport to the left twice. We need it to open the other two gates later.

On turn four, move that dummy echelon you moved from your Heliport up to the Radar Tower. Once again, it's to despawn the Strelet+. Move it back towards the console on the bottom of the map. Make sure you leave one AP for it though, you need that one AP to move your combat echelon out of danger in the top part of the map. Move that echelon down one node, so it's safe from the red Golyat.

For turn five, use the dummy echelon at the bottom of the map to open up the two gates, and then move the dummy echelon down one node as well. Take the dummy echelon that should still be chilling on your Command Center and move it to the now-open gate on the left. This will bait the Nyto White so you can capture the Heavy Heliport next turn. Be sure you also move your combat echelon to the left one node to keep it safe from the red Golyat chasing it.

On turn six, use your dummy echelon on the bottom as well as the combat echelon at the top to capture the Heavy Heliport. That's it for this turn.

On turn seven, we can end the map. Move your combat echelon up one node and deploy your HOC, preferably BGM-71, then swap with it. Engage the Nyto now that you have HOC support.

So for this boss, she'll do a lot of shit that doesn't really matter, since it's a debuff. Her main thing is that she has failed Isomers coming in constantly, that you need to take care of before they stun you with an EMP. For these, once they start getting close to you, retarget your ARs so they focus fire them.

She does a lot more than that, though. Every so often, she'll pick one of your T-Dolls and put them into a stasis. She will then summon a clone of herself that will start shooting you. The clone has a taunt effect so all your T-Dolls will focus it down. Killing the clone will end the stasis. These clones, I believe, also give an HP shield to all enemies on the battlefield at the time. Fun. Oh, and the clones also have different targeting, because they change type of weapons depending on what T-Doll gets hit with the stasis!

Oh, but that's not it, she also has skills. At around every quarter of her HP, she'll use her skill called Epiphyllum Illusion, which will, once again, stasis one of your T-Dolls. However, now there's multiple clones with HP shielding to cut through. The amount of clones she spawns is equal to how many T-Dolls you have left on the field. Five T-Dolls up? Five clones spawned. This is a hard DPS check, since if you don't kill the clones fast enough (within 15 seconds), the stasis will become permanent for the battle. And there now will be a clone that is invulnerable and will stay there for the rest of the fight. So...DPS hard and fast.

If you can clear the fight, you'll finish the map.