A Rock and a Hard Place EX 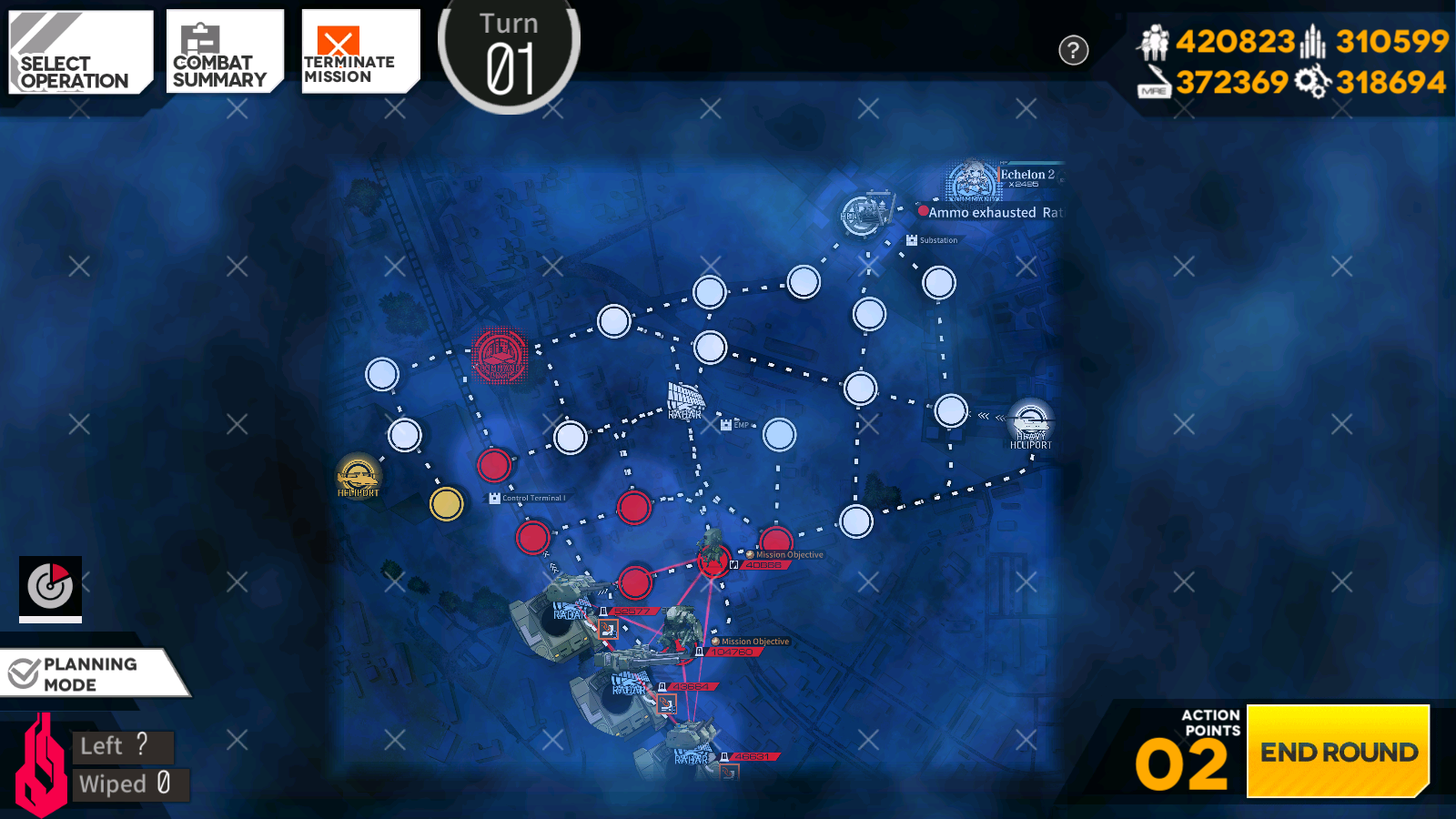 Objective 1: Capture enemy Command Center, engage in no fights, and do not withdraw any echelons

This is a puzzle objective, since we do no combat. For this we'll only use two dummy echelons, so if you're here to grab the EX clear reward, well, it's an easy win. All we gotta do is navigate a field of horrific enemies that have fucking laser/mortar support from the Gustav train. Without fighting them, as well. Fun.

After starting the map, take the closed Heliport that's next to your Command Center and deploy a second dummy echelon. On turn two, be sure that you turn on the Substation, then move to the Heavy Heliport down south. Be sure to not walk into the Centarus on the way down, but I feel like that should be obvious. Our next move is to head to the Radar Tower that's marked on our map; again, be sure to not walk into any enemies. You'll find an EMP sitting on top of it, and this is how we won't explode and die while we're chilling in the middle of all these enemies. Use it and it will immobilize the enemies surrounding you. End turn here. Now we can navigate around the clusterfuck of enemies by going down and to the left. Follow the clear pathway up from the left side of the map up to the Command Center and take it to end the map.

Okay, now the real party starts. We got Gustav rolling in with its support for most of the Military units on the map. That support will make a lot of the fights here even harder than they normally are. Our first priority is to get to the console on the left side of the map near the third party nodes so we can disable Gustav. Then we can start clearing out the rest of the map. Because of that prerequisite, we're gonna have a similar opening to objective one.

Start the map up with one of your AR/SMGs. Move to the closed Heliport to the left of your Command Center, then deploy your second AR/SMG. Be sure to turn on the Substation here.

On turn two, we want to grab that Heavy Heliport to the bottom right of the map. While you move down, take out the Centaurus echelon, since it doesn't have Gustav support. If you take damage, you can repair very easily.

For turn three, move your second AR/SMG to the left, and the deploy a dummy in its place. Move your first AR/SMG to the EMP on the map, careful to avoid any of the Military units. Once you've reached the EMP, use it to freeze the enemies.

On turn four, navigate around the Military units with your first AR/SMG to go down, then off to the left of the map. That should be a clear pathway up to enemy Command Center. We're not stopping here though, move towards the third party nodes. You should be able to end turn in a safe spot away from the Military units.

On turn five, we can access the console to disable Gustav. Push through the zambies with your first AR/SMG and make use of the console. When done, move up one node and surround the Heliport there. With Gustav disabled, it now turns into a cleanup mission in the middle of the map. The enemies are still tough as nails though, so we want to push things into our favour. We have the option to only take fights when you use the EMP. As a reminder, the EMP also cuts enemy stats MASSIVELY, so the fights turn quite easy.

So that's my advice for you to finish out the map. All it is is hunting down the enemies in the middle of the map, which, if you're doing EX, I don't think I need to hand hold you on that one. Make use of the EMP every other turn (since it has a cooldown) and take the fights then.