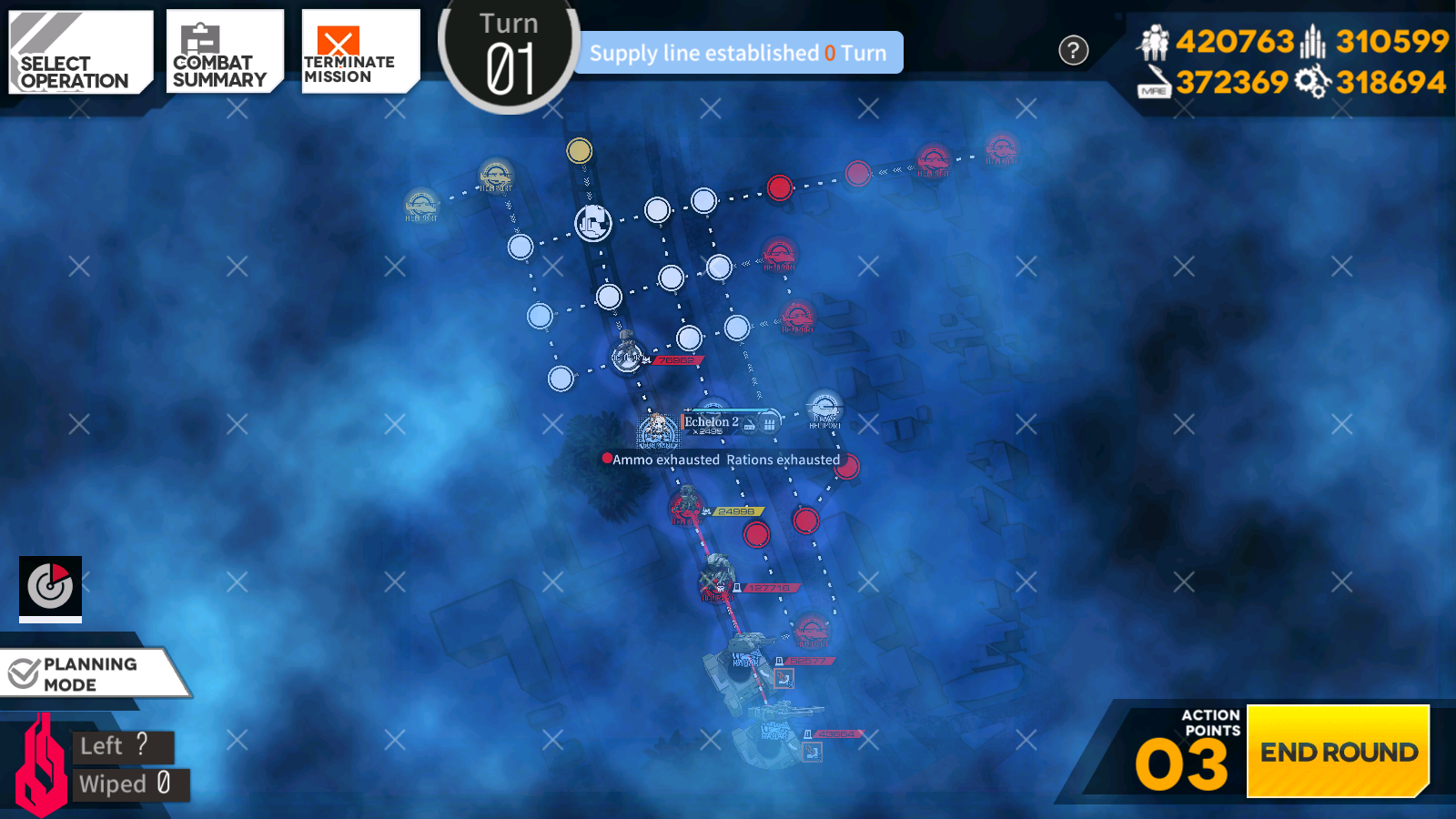 Objective: Establish and maintain a supply route for four turns

Ah yes, fuck this map. Getting the supply line up and running is the easy part, but my god, the amount of combat needed for this and the enemies that show up are brutal. Establishing the supply line aside, we have four total nodes to defend, with the Rally node having Minotaurs coming in to fuck with us. The other enemies are nothing to sneeze at either, so get your game face on.

The immediate concern is the enemies coming in from the south. Those Heliports will continually spawn extra enemies and harass your Command Center, so we need something to constantly be defending it. We also want to grab the unoccupied Heliport near the Gustav as well. I'm pretty sure it spawns extra enemies to deal with, and that means there's just way too many angles to defend at once. May as well cut down on that now.

So turn one will have us deploy a dummy echelon on the Heliport and an AR/SMG echelon on our Command Center. Move the AR/SMG echelon up to the closed Heliport and have it take out that Cyclops. Deploy your gunboat on your Command Center and then move a dummy echelon to the unoccupied enemy Heliport by the Gustav. At this point, there may be one issue with enemy movement RNG. The Cyclops to the right of your AR/SMG echelon may decide to take your Heliport at this point, at which I would recommend just restarting cause it's honestly really annoying to deal with that. Most of the time, from my observations, it decides to fuck off in a different direction. Hopefully it does the same for you. Cause fuck the alternative.

Turn two is now when we're gonna go to the Rally node. We can't quite finish the supply line yet, so we'll do some setup. With your AR/SMG echelon, go through the left path up towards the third party nodes then chill on the Rally node. Move your dummy echelon from the bottom to the Heavy Heliport off to the right of our starting Heliport. End the turn.

Turn three is when we'll start having our own Gustav support...even if it sucks. Deploy your second gunboat on the Heliport. Remember that Cyclops echelon that kinda fucked off on turn one? Yeah, it can be an issue here. You'll need to take your AR/SMG and kill it, but...it can be behind some armoured enemies. In which case, you'll kinda just have to deal with that. Remember, you can repair very easily at this point, and you likely will need to if your echelons aren't big fucking studmuffins. Point is, the plan starts getting a little hazy here. Main thing is that you want to get your second gunboat out and about at this point while finishing up the supply line. So get that done. You may get the line interrupted here, but that's okay. Just establish it next turn.

On turn four, we want to pull out our RF echelon in preparation for the Minotaurs to start rolling in to the Rally node. Pull that out and keep your second gunboat defending your supply line from the Dactyls coming in from the right. Position your RF echelon to the right of the Rally node so it can catch the Minotaurs. You'll pretty much just keep this strategy rolling to finish out the map. If you need to resupply/repair your echelons, either retreat and redeploy, or move them back to the Heliports so you can resupply/repair. Main thing is, you're continually defending your supply line. Keep it up for four turns and you win.