One of the new features of the Client Update of October 22nd 2019, is the Forward Basecamp! Now you too can be a damned FOBBIT. From here you can organize and send out expeditions into the great uncharted wastes of the post apocalyptic hellscape that is the environment outside of major cities. The yellow and red zones. The place that the GDI Government has pretty much written off to be patrolled or reclaimed by people they have to pay less than the real Army. So, us.

The camp is unlocked at Commander lvl20, so you may want to rush this. 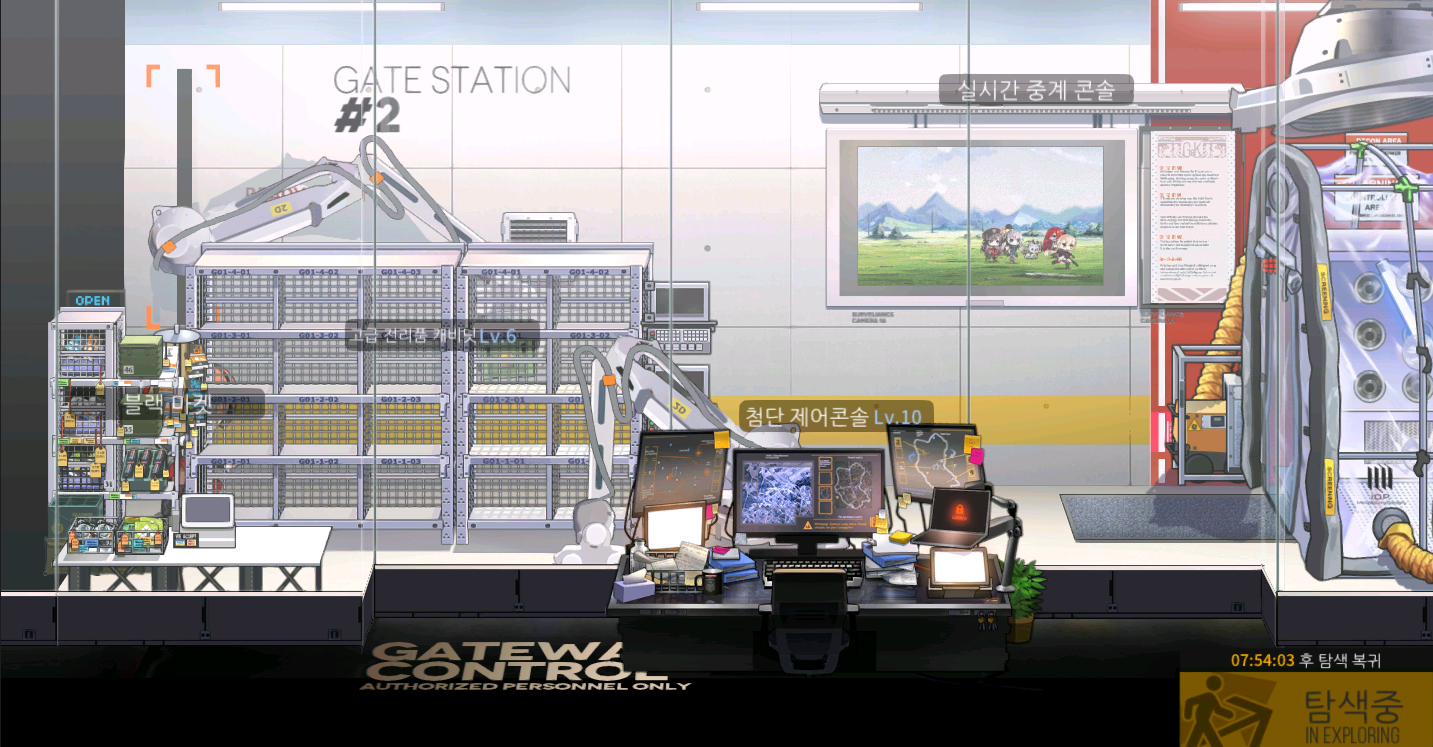 There's 4 facilities in the basecamp, but only 2 are upgradable. From the image, left to right, they are:

Oh and there's the door, which isn't labeled. Of these, only the command console is expensive at 10 ranks. The others either don't need upgrades or don't go all the way to level 10. This makes it fairly cheap to complete the room, which is good because there's a reason people have been going "it is generally a good idea to rush this room early for free stuff."

As your dolls acquire stuff, you see boxes appear on the storage area. Just click/tap it to claim your stuff. 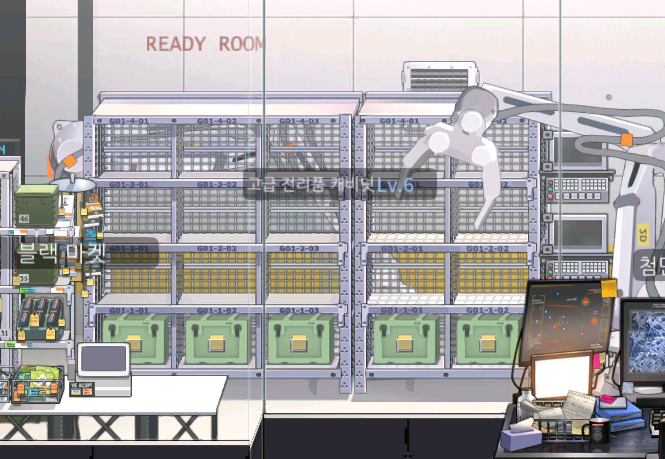 The boxes as it fills up. It can only hold so many boxes, so collect them regularly - You lose any you can't store. 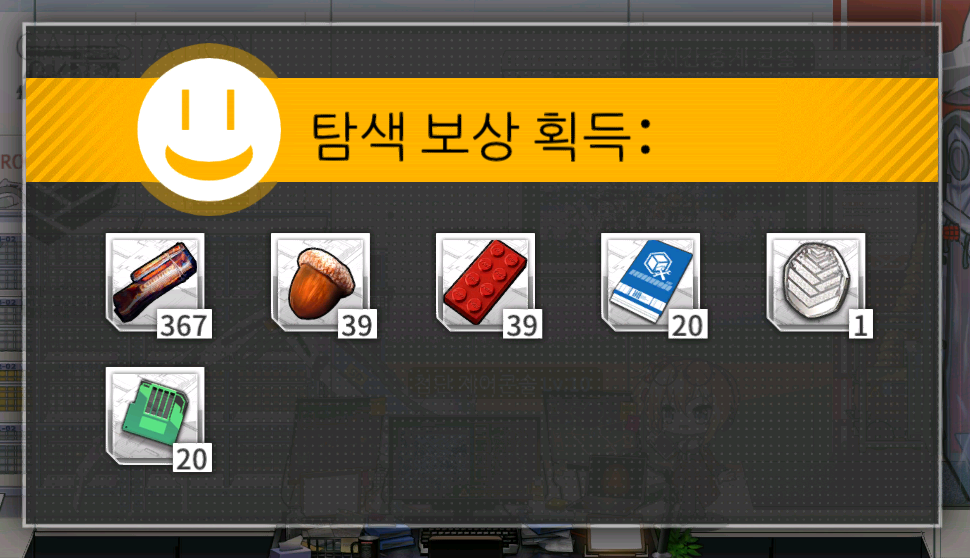 Some rewards. Yes, you can get all sorts of stuff from Calibration tickets to tokens to data. Just not much of any 1 thing at a time.

On the display monitor, you can see what wacky hijinks your dolls get up to. These are varied, give some splash of personality to your dolls (like an LWMMG that apparently REALLY likes cleaning up and packing away trash), or provide amusement. What happens doesn't particularly matter except maybe for your amusement. 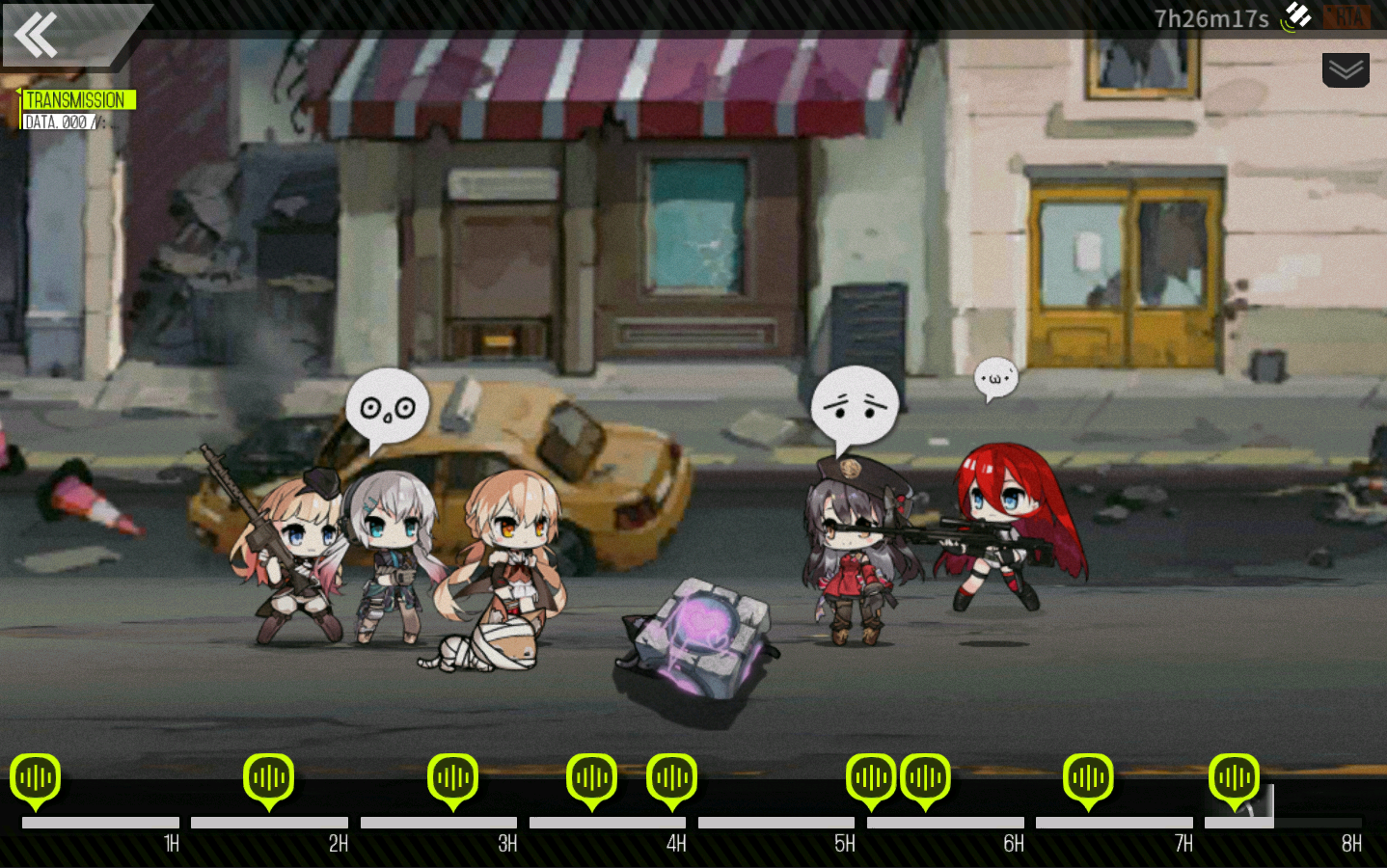 Here, they find a product of SCIENCE

There's some stuff that's flavourful (I learned my LWMMG is a neatfreak apparently), or downright funny, but none of it is important mechanically. 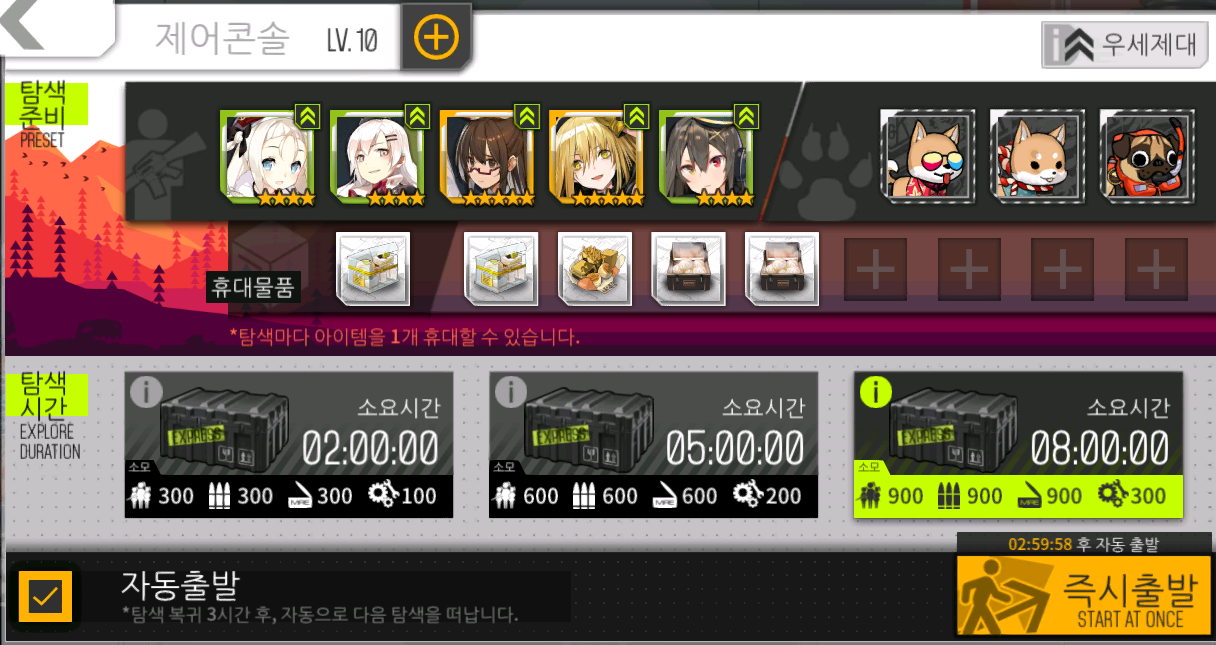 The organisation page is the only real part of expeditions that requires your input, and is accessed from the Control Console.

From here, you choose which dolls and pets go on the expedition, and what items are assigned to them. Note that while you can set a whole line of items, ONLY THE LEAD ITEM IS USED. The rest move up the order and are used in turn.

The dolls and pets you send on the expedition are your own chocies, however keep in mind that every week, there is a set of dolls and pets that are flagged as "advantaged" for that week. This gives them bonuses which are discussed below. They are marked with Chevrons.

The interface is simple. Just click/tap and... well.. it's pretty intuitive and frankly if you need me to figure this out for you then you have other problems.

After that, review your choice, pick which of the duration sets you get. You start with only 2 hour expeditions, with 5 hour ones unlocked at Console level 3, and 8 hours unlocked at Console level 7. 8 hour ones are the most efficient, so those are a good one to unlock first. After that, send them off and wait for them to come back with a reward. Note that the resource numbers under the timers are the COST to deploy an expedition, not the reward. Yes, it takes resource.

The upgrade costs for the control console are as follows, provided in convenient table format.

Dolls are the most important single thing, so you really want to hit lvl8 as soon as you can manage, as dolls provide the bulk of your bonus. If you do not have a useful stock of pets, you can stop at 8 for a bit, but the third pet slot is quite nice once you DO have some pets, as they can steer your echelon towards rewards you actually want. Level 10 just unlocks more item slots, which is convenient, but not necessary (again, items are used 1 at a time, this just lets you queue up more).  What the items do is kind of obvious when you see them. Just read the descriptions. Seriously. They range from things like -Expedition time, or increased reward yields.

Note that dolls assigned to Expedition are taken off any echelons they're in and are unavailable for other use in the same way sending them off to do logistics missions locks them out. This does not however, require an echelon slot of its own. You can also use autoassign but.. uh... yeah just don't, it's kind of dumb. Pets are unaffected, and can continue to be used in your dorms because reasons.

There's also an option to automatically resend expeditions 3 hours after they've returned, just in case you aren't around.

As mentioned, every week (yes, week, the Ceia video on it is wrong, note his correction in his comments and stop bothering me about it), a set of dolls and pets are flagged as "advantaged." You can check by clicking on the INFORMATION button on the upper left of the organisation interface. These reset every Monday.

For example of the advantage dolls for a week. As you can see they can vary from a wide number of sources.

Every doll you send has a measurable effect on expeditions.

Advantage Dolls give +8% to resources provided by Return Rewards.

Levels also provide a bonus to return rewards, equal to 0.04% per level, stacking additively with the advantage bonus.

These are the only 2 factors of a doll that matter. It does not otherwise care about such things as affection, links, damage, equipment, marital status or rarity.

Pets meanwhile, do NOT provide a bonus to rewards by themselves, but advantage gives increased *chance* to obtain midmission rewards via mysterious destination visits. Yes, CHANCE, THIS IS NOT GUARANTEED. (Apparently I need to emphasize chance doesnt mean 100%) The big thing they do is they also steer your echelon towards a certain area, increasing likelihood of getting that area for your expedition and thus actually getting the reward you want. As such, when organising pets it is best to do so aiming for an area you want. It also means you can relax a bit after getting 3 each of each pet class (dogs, cats, etc), as that determines the area preference, rather than specific pet types. Advantage does NOT increase likelihood of going to a specific area.

Dogs increase the chance of going to the Snow field area.

Cats increase the chance of going to the City area.

Birds increase the chance of going to the Forest area.

Misc. increase the chance of going to the Wastelands area.

Thus, bring 3 pets of the appropriate type to maximise your chances of getting the area you want, so you can buy the loot you want.

This is the most important part of expeditions: Getting paid for it. In order actually to actually get rewards, you need to upgrade the loot cabinet.

Thankfully it only has 6 levels, so you can get it done in a day. 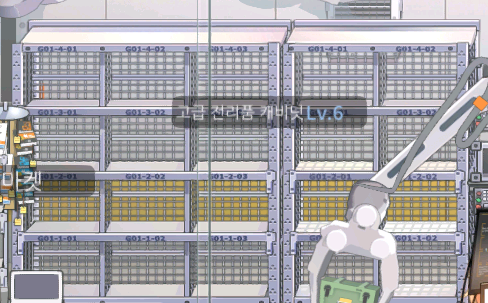 The loot cabinet is divided into 2 areas: The Mid Rewards Area (on the left) and the Return Rewards Area (on the right). Mid rewards are acquired by chance from special events within the expedition (like finding a certain blue telephone box). Return rewards are acquired when your dolls finish the expedition and return home. Easy right? The amount of these you can store depends on the level of your loot cabinet, so do level it up. At least it's cheap.

There 4 types of Return rewards, and they're all currency for the black market: City Gifts, Forest Gifts, Snowfield Gifts and Wastelands Gifts, each from the 4 respective areas your expeditions might end up in (Cities, Forests, Snowfields, and Wastelands. Guess which gives what). The amounts recovered depend mainly on the expedition duration, and then are boosted by items and dolls. There's a bit of RNG involved with the amount, but the ranges are consistent. Of course, 8 hour ones are the most time efficient for those.

With these rewards, you can thus purchase things on the black market, which is accessed from the cashier on the lower left. Kalina has been... busy, let's just say. 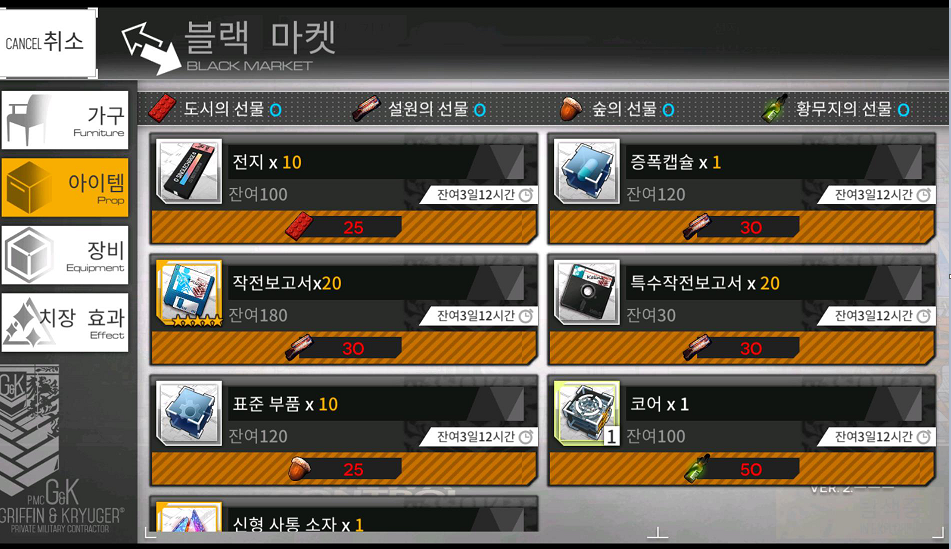 I needed a fresh account to get a pic of the black market with actual stuff in it, because I emptied it out already...

The market allows you to purchase furniture, unique equipment for some dolls, special cute effects for your doll chibis, and most importantly, stuff like cores, combat reports, Universal parts (Equipment pills!) and the like. Yes, this means you'll be drowning in combat reports and find it super easy to upgrade your gear now. Just shop around for stuff you like.

The Black Market items with limited stocks reset every 1st of the Month.

Anything that doesn't have limited stocks are permanent and you can get whatever numbers of them whenever you want.

(Yes, I had to make that more obvious, people seem to have kept missing it.)

Mid Rewards meanwhile, consist of all the misc. things you can get mid mission, and include:

There's a few other things you can get in other servers but I didn't include them since they don't exist on EN yet. Either way this isn't a comprehensive list. Unlike with Return rewards, you don't get to influence which of these you get.

With how much you can potentially get from these, it is generally now recommended to work on this before even your data and fairy rooms. ...And frankly this kind of reduces the urgency of the data room a whole lot anyway unless you're raising HOCs.