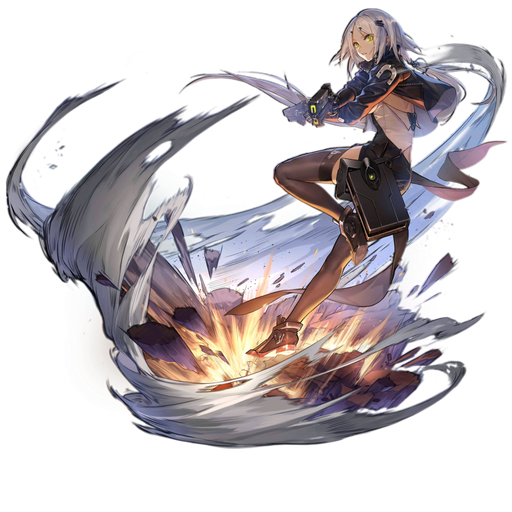 The strongest single-enemy killer in SF, get her if you can. If you want a boss dead, she can probably AFK solo it. Yes, she can 1v1 Yegor while you're jacking off to something else entirely. For this reason, her best buddies are Manticores - both for taking down pesky minor mobs with their powerful AoE attacks, and because of their skill synergy with her - their debuff works for her skills.

Ok, that's a weird thing to name it. Anyway, this is her big "as I keep shooting it, I hurt it more" skill. It's also her active. This thing is huge eventually stacking at 300% damage increase (360 if you get enough copies to boost her skill) if her target lives long enough.

What's with hunter's skills and getting weird names on EN? It's a debuff that prevents enemies' movements. The real kicker is it also reduces their accuracy (sure, that's nice) and reduces their effective armor (very nice). When maxed out, it reduces enemy armor by 50%. For the most part, this is overkill for normal enemies, but oh boy, what she does to armored bosses...

Every time she shoots and doesn't crit, the next shot has a stacking chance to crit. Not much to make note of here. Not a priority but you should work on it at some point.

Going even further with a name has absolutely nothing to do with what it was called on other servers, and makes absolutely no sense. However, it raises her damage vs. anything with a debuff, maxing out at 20%. Very much worth having, especially if you're packing Manticores while being lazy.