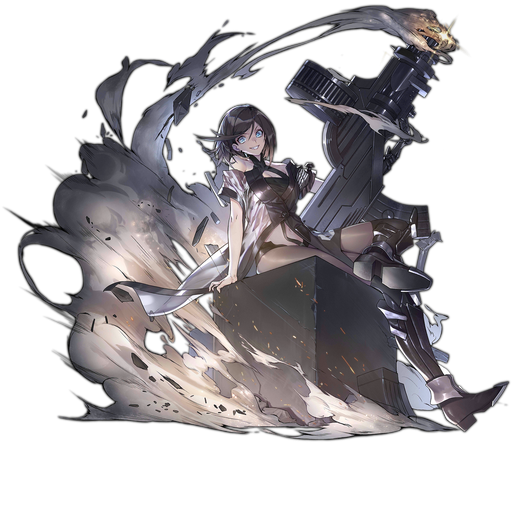 AKA Dogmom. The Crazy Dinergate lady. The weirdo. The Ringleader who gets her head blown off in the mango version of the game before she actually gets to do anything.

Her skills are focused on throwing wave after wave after wave of dinergates at people and somehow making it stick. Good for mass warfare, or overwhelming things that cant shoot very much and have no AoE attacks.

TBH I'm not convinced she is really worth the effort to train, but there's a certain boss in Mirror Stage EX that she trivializes, so if you're into raising an entire unit just to kill one specific enemy...

Nicknamed "Gate of Babylon" on some other servers for reasons you will immediately understand when she casts it. A mass of dinnergates in formation advance towards the enemy like a wave of slow moving bullets. Unlike bullets, these are actual units and can draw enemy aggro. However, they still need to reach the enemy to deal damage. Unlike a normal dinnergate, they don't stick around to attack, and instead inflict damage as they pass through enemies. Their stats are based on a percentage of Intruder's, so you need both high levels in the skill AND make sure Intruder is high level to really make it stick.

A weaker version of Military Raid that can be added to other echelons. Has some use as a distraction for enemy units to buy your girls time to do something quickly, but don't count on it being more than that, as these ones don't get a percentage of intruder's stats and therefore suck even more than normal.

Simple passive. Gives all friendly units a shield at the start of the battle that lasts for five seconds, which itself is based on a percentage of Intruder's Health.

Gives buffs to any unit that's considered a "reinforcement". So basically summons. So, not just her first skill, but also stuff like, say, the mobile Goliath factory.