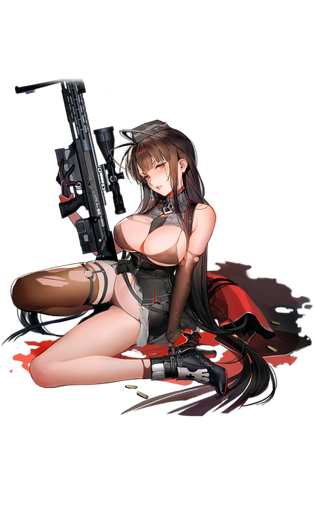 AKA… I'm sure you can come up with a few backronyms for DSR, given her artwork.

She's a big bamboo with decent stats (higher firepower than M99, lower than NTW-20), but a variable multiplier on her skill damage. 6x (at full charges) against unarmoured enemies is extremely unattractive – Mosin with her chip manages the same damage output, with much lower cooldown –, but 10x (again, assuming full charge) against armoured enemies is very attractive on paper, since a lot of bosses you want to smack with bamboos are armoured.

…except, of course, MICA does it weirdly: DSR's skill doesn't look at the armour stat, but at a separate, hidden "has armour" tag that some armoured enemies do not have set, and the way tags work in the game means it can be buggy whether it works or not, further making her less useful. Additionally, bamboo Rifles got a rework that makes them a pain in the ass to use at full power in exchange for being technically more flexible.

If you know what you're doing, you can delete an enemy target in short order. If you don't... you might be better off doing some research before deciding if this is the doll for you.