With EN now having been introduced to the concept of Tile-based active skills, it's time to review these and how they actually work. Also how they're horribly coded and abusable as hell.

First up, what is a tile-based active skill?

A tile-based active skill is an active skill (obviously) which, rather than affecting all your dolls or a subset of dolls otherwise regardless of their position, only targets and affects those standing within specific tiles relative to the doll casting it (generally, the area is equivalent to the doll's bufftiles. There may be more eventually but so far thats what all of the ones that work like this are). So, seems simple enough right? Stand there, get buffs?

Except things aren't quite so simple. If havne't read the article on distance and movement, I'll wait. Some principles there are important to this.

First of all, despite being seemingly Tile-based, the battle area itself isn't. It's a continuous area with a full range of X/Y movement, with the tiles merely being anchoring points. You can actually get away with a whole lot by making use of movement (including directing enemy AoEs into hitting nothing by making the blasts land in areas where the hitboxes of your dolls dont overlap!)

So basically, that empty space between the boxes? 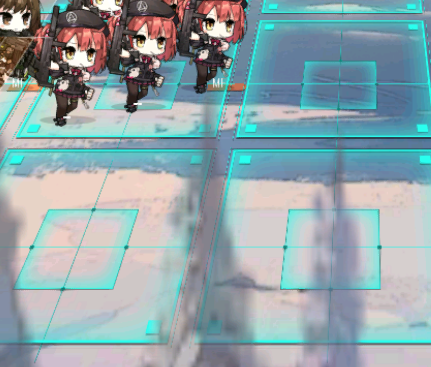 Even if your doll is standing there, as long as part of your doll's hitbox is actually ON a square tha gets tagged by the scan for the skill, then its fine: it benefits. It doesnt even have to be stopped, as long as it passes through, hence the origin of this chicanery with MDR.

However, you may notice its possible to be partially in a square because of hitboxes... then obviously you can be partially in multiple squares at once. What happens if you are in multiple squares at once? ...Well, you get the buff/debuff multiple times. Because of how the game works, they are also considered multipliers and thus are multiplicative rather than additive, as demonstrated some people at DCinside who made these. Grapecano was used because it is a very NOTICEABLE effect.

First a control sample. This is how powerful her shot is normally, without K5 joining in.

And with. Notice the difference is WAY MORE than what K5's buffs could possibly be by themselves. However, hecause grape was between 4/5/1/2 and K5's ability covered 4/1/2, she effectively got the buff 3 times, and yes, they apply multiplicatively.

This applies to ALL tile based buffs, from K5 to Howa Type-64.

So how practical is it to exploit? Well, usually not very - the movement is usually just lost DPS. However, this has uses in say, the use of stacking extra damage for bamboo spear formations. Either way, it's another tool in your arsenal which you might find some use for.