Hey. Hey kid. You one of those en players that's been playing since near the beginning? Remember 1-4 of original cube? Yeah. That one, the one you used an external tool to help find Ouroboros. It's back, and this time you don't have a cool tool saying where she is. Now you gotta use your big ol brain for this. Good thing for us, I have an MVP korean friend that translated how to figure out where she is based off of what nodes are taken.

You may want a leveled/skill leveled Illumination fairy, as it can help. It's not needed, however.

At minimum, you'll want a fully leveled AR/SMG squad and something that can clear armoured enemies. You'll have a slightly better time with two AP echelons, since there's an annoying tarantula echelon that can give you trouble if you're using something that isn't an MG echelon. You can survive without it, though.

Map objective: Defeat the boss. (Despite there being multiple "bosses" in the map, only Elite Ouroboros is counted towards this.)
Turn Limit: 8
Echelon Limit: 6
Map Composition: Mixed armoured and unarmoured enemies. 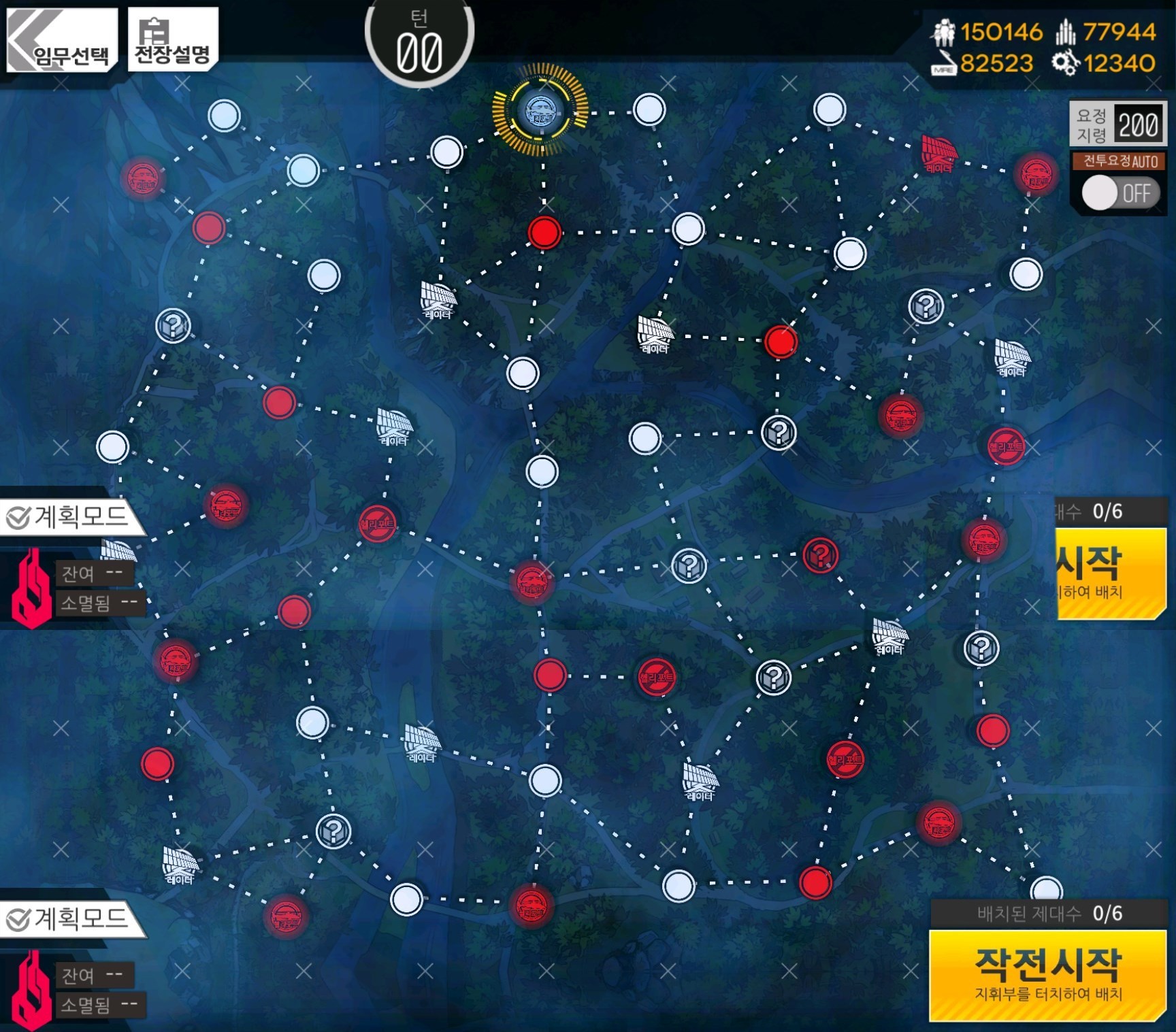 This is the same map as 1-4, just with a lot more stuff going on. You have a few Jupiters blocking paths around the map, as well as the Elite bosses from previous map roaming around.

Since the only goal you have is to defeat Ouroboros, you'll want to ignore most of the map and focus on finding Ouroboros. This next section is entirely going to be on how to do so.

Here's where your brain power is gonna get tested. This section is all about how to find Ouroboros within the map. She has multiple different spawns, so you need to use some clues to figure out where she is. This means you need to look at what nodes are taken on turn 2 and try and deduce where she is via that. Thankfully the korean playerbase has done most of the hard work to figure this out and now we get to reap the benefits. 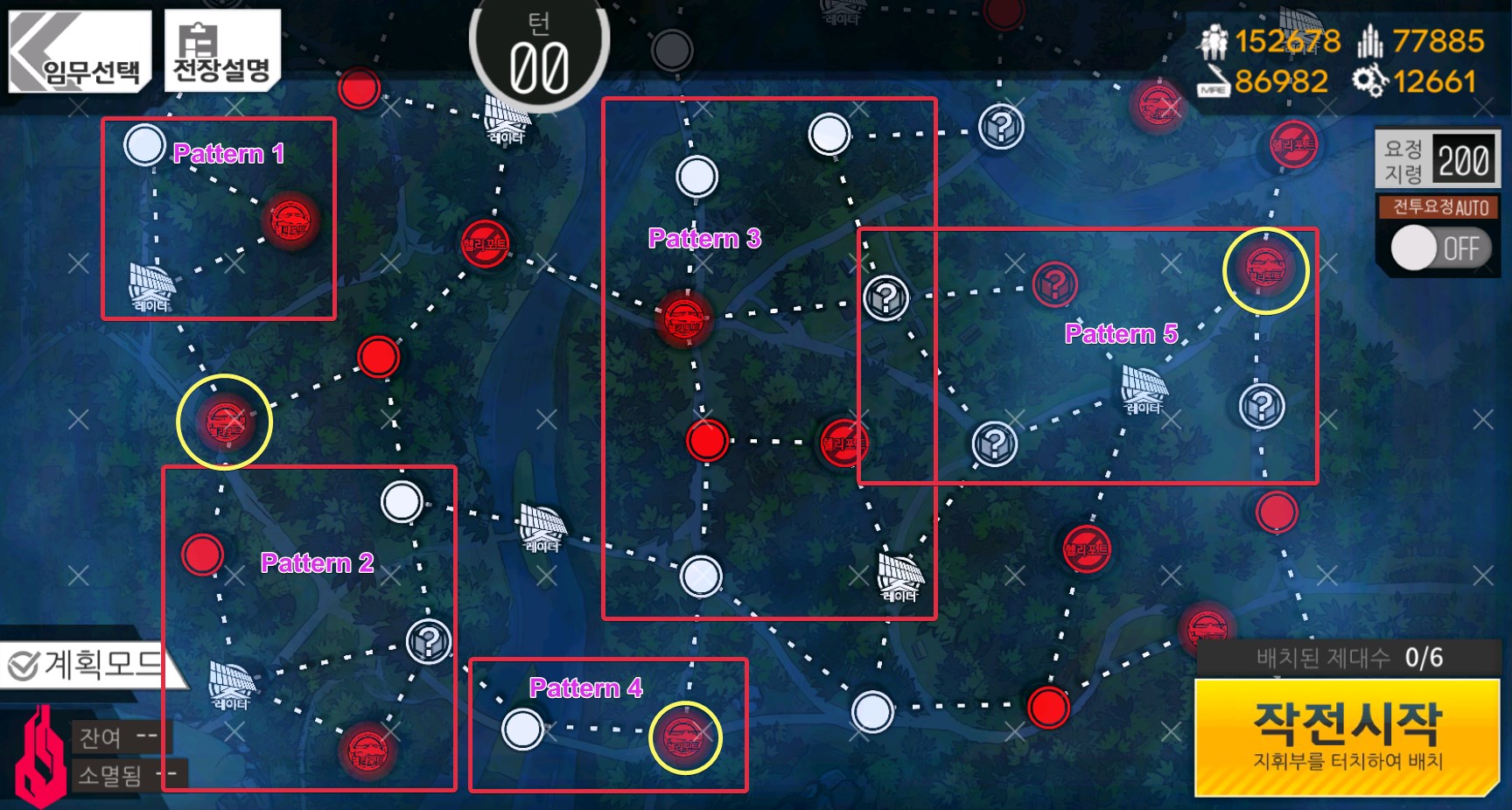 This is a map of the various spots she'll spawn in along with sections to look at to determine where she is. The circles represent where she can spawn, and the boxes are for determining where she is. Go through these patterns and compare it to the state of the map on turn 2 to figure out where Ouroboros is.

These patterns are for how the nodes are on Turn 2. Be sure to pay attention to what changed from turn 1. From here, you just need to get to the area and search the nodes nearby. 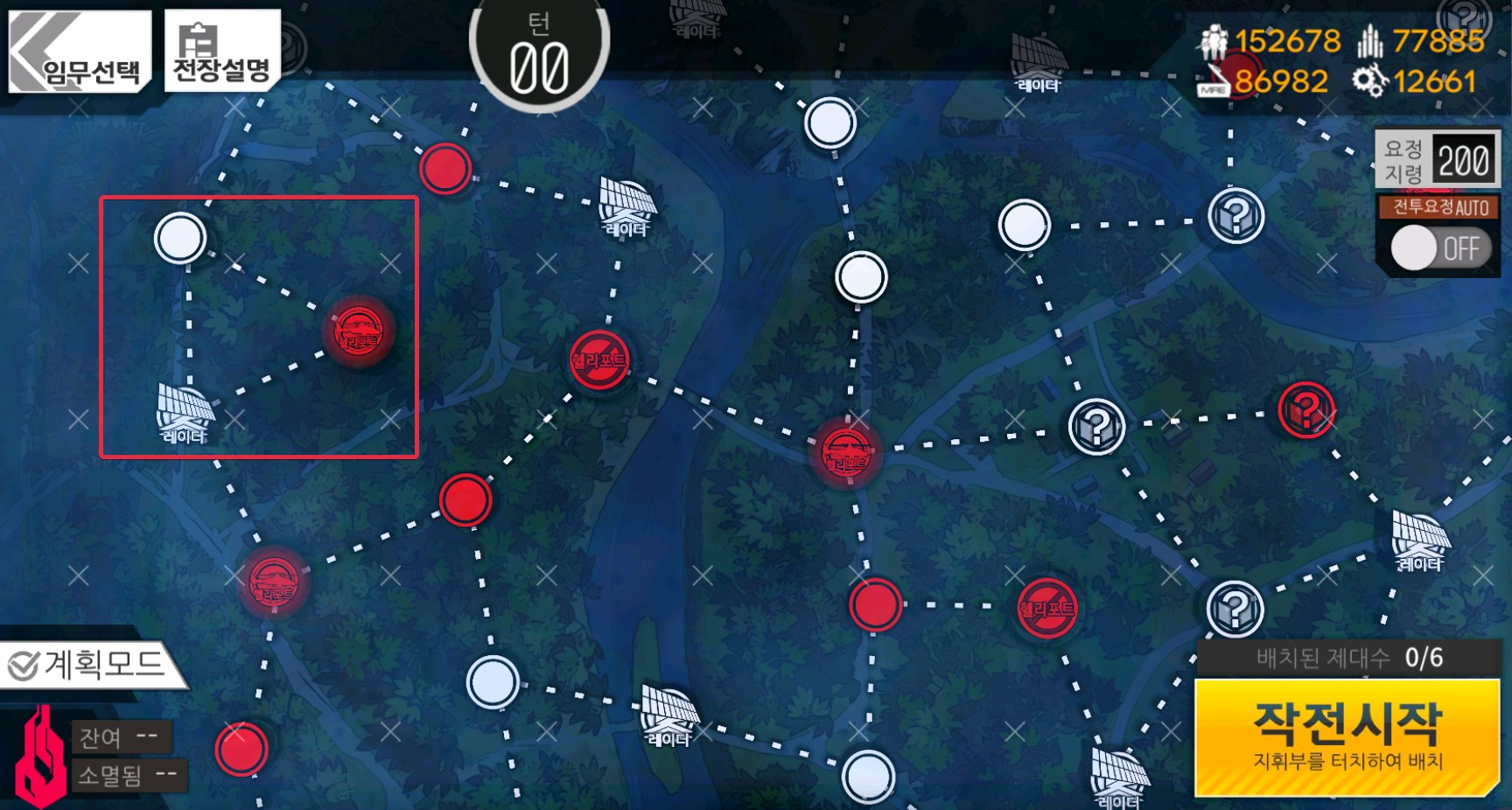 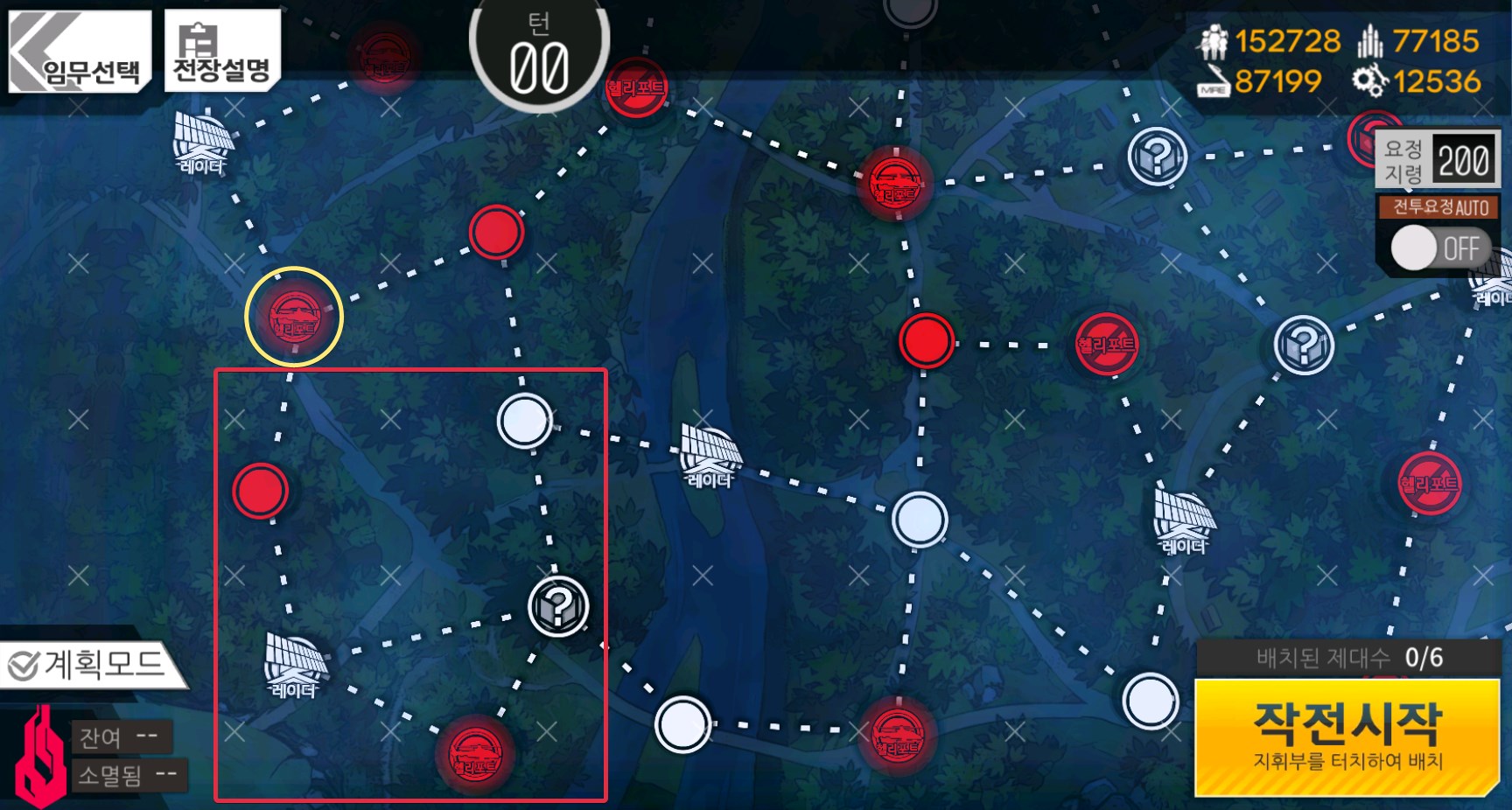 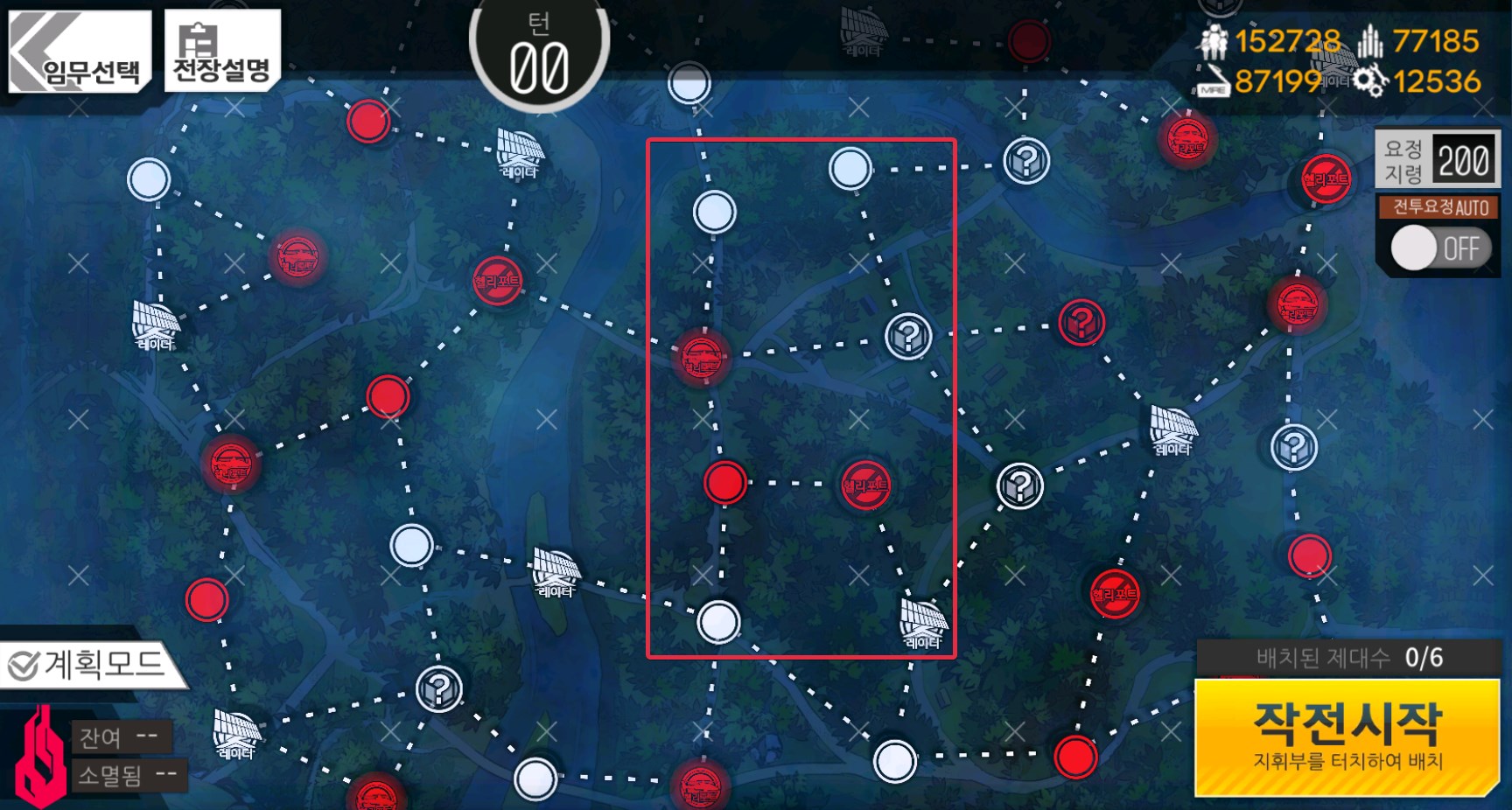 Pattern 4: If the node left of the helipad is red, she's on that node. 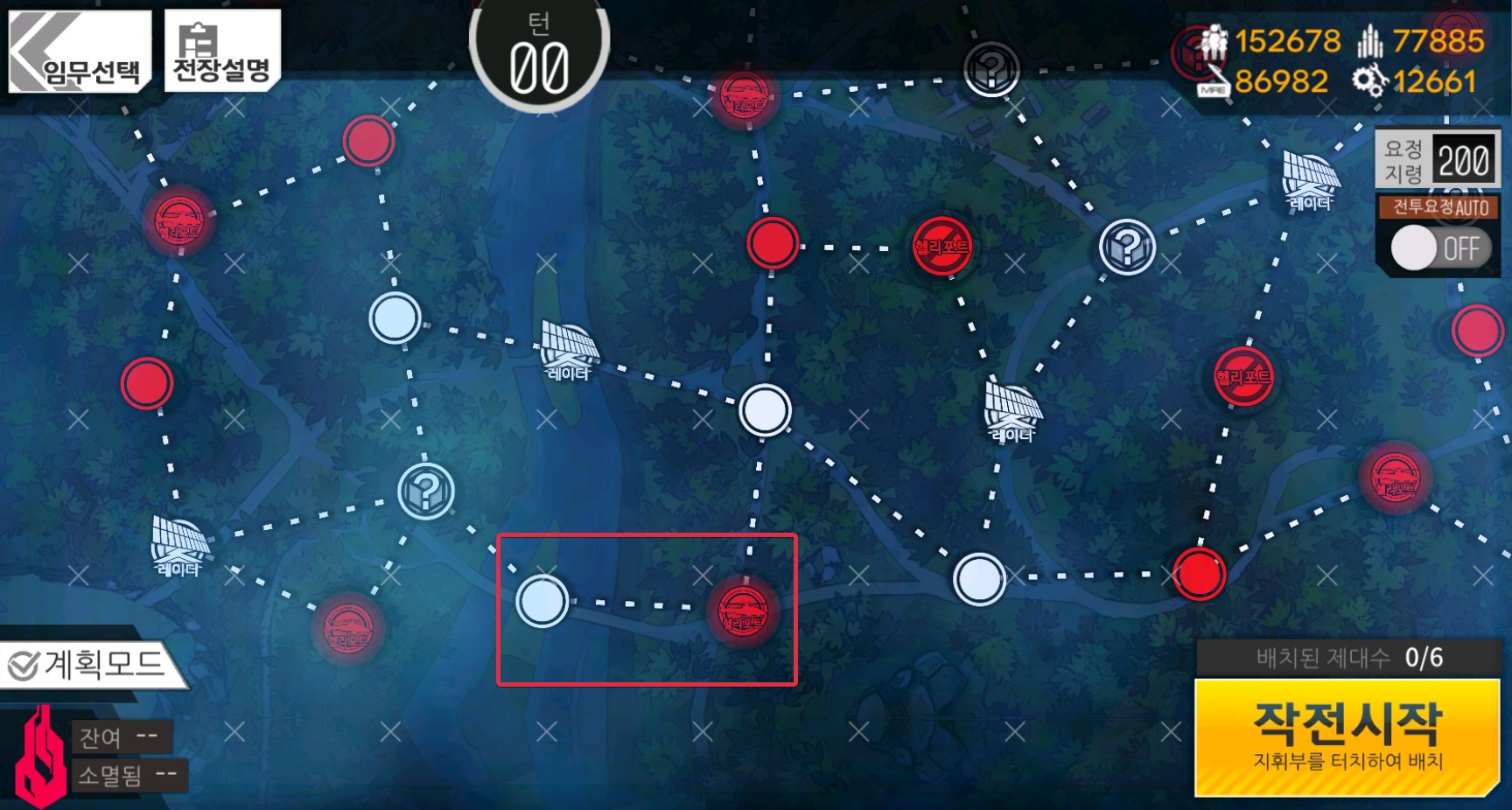 Pattern 5: On pattern 3 area, if the north of helipad is red and the right helipad and also the right radar is red, she's on pattern 5's radar. 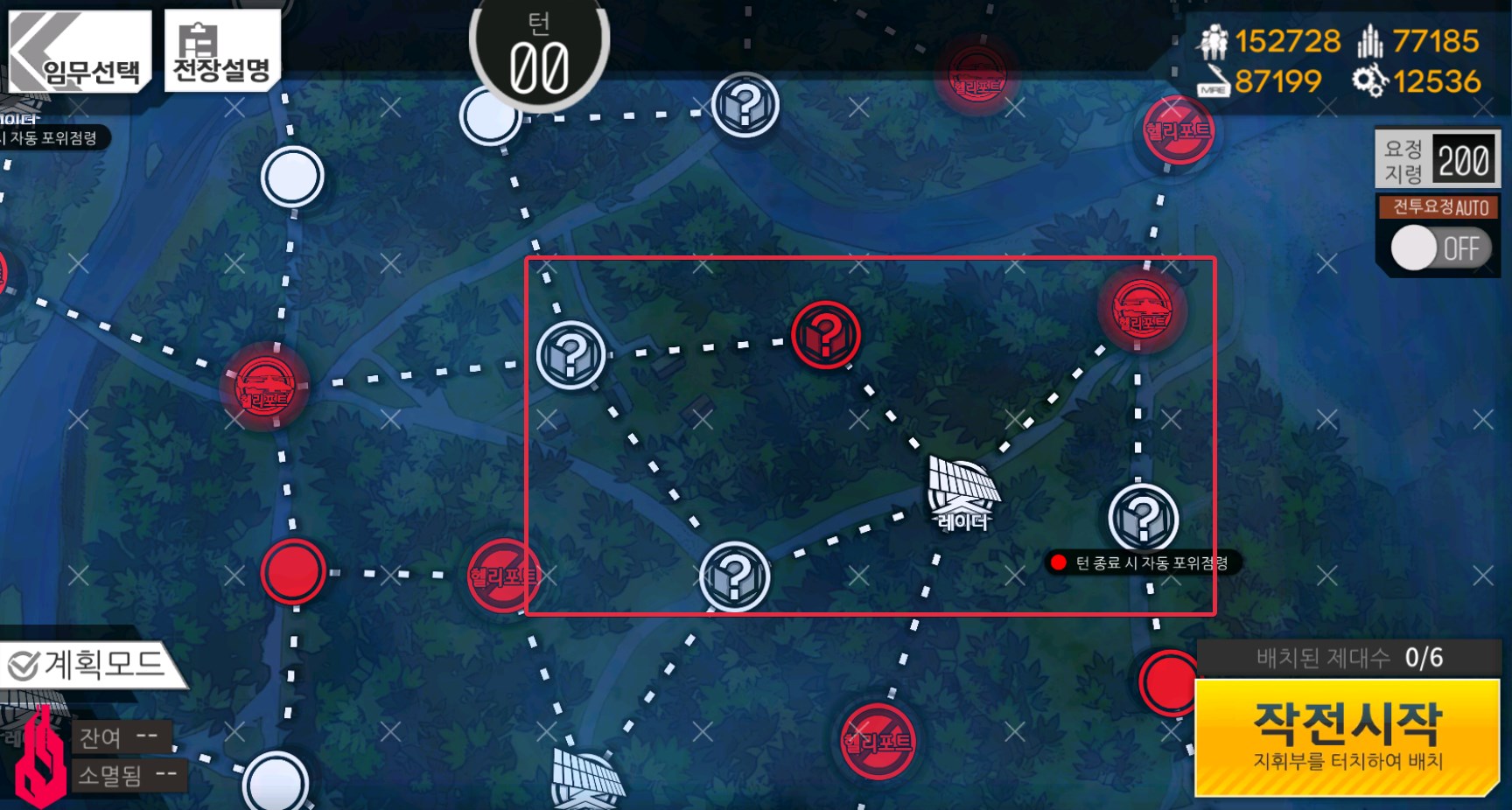 As a general tip, you'll want to go down the middle of the map, directly south of your starting heliport. This way you can take the heliports on the way down, as well as have access to multiple spawn locations of Ouroboros.

She's not too much different from her original incarnation. The only thing she has different is her special, Missile Salvo. She'll target 4 tiles that currently have a T-Doll on them, and then fire missiles ontop of each of those tiles. All you really need to do is move out of the tiles onto different ones. It requires some micro to get everyone out safely, but it shouldn't be too bad.

(Please don't mind my cursor, I stole the picture from the video I did) 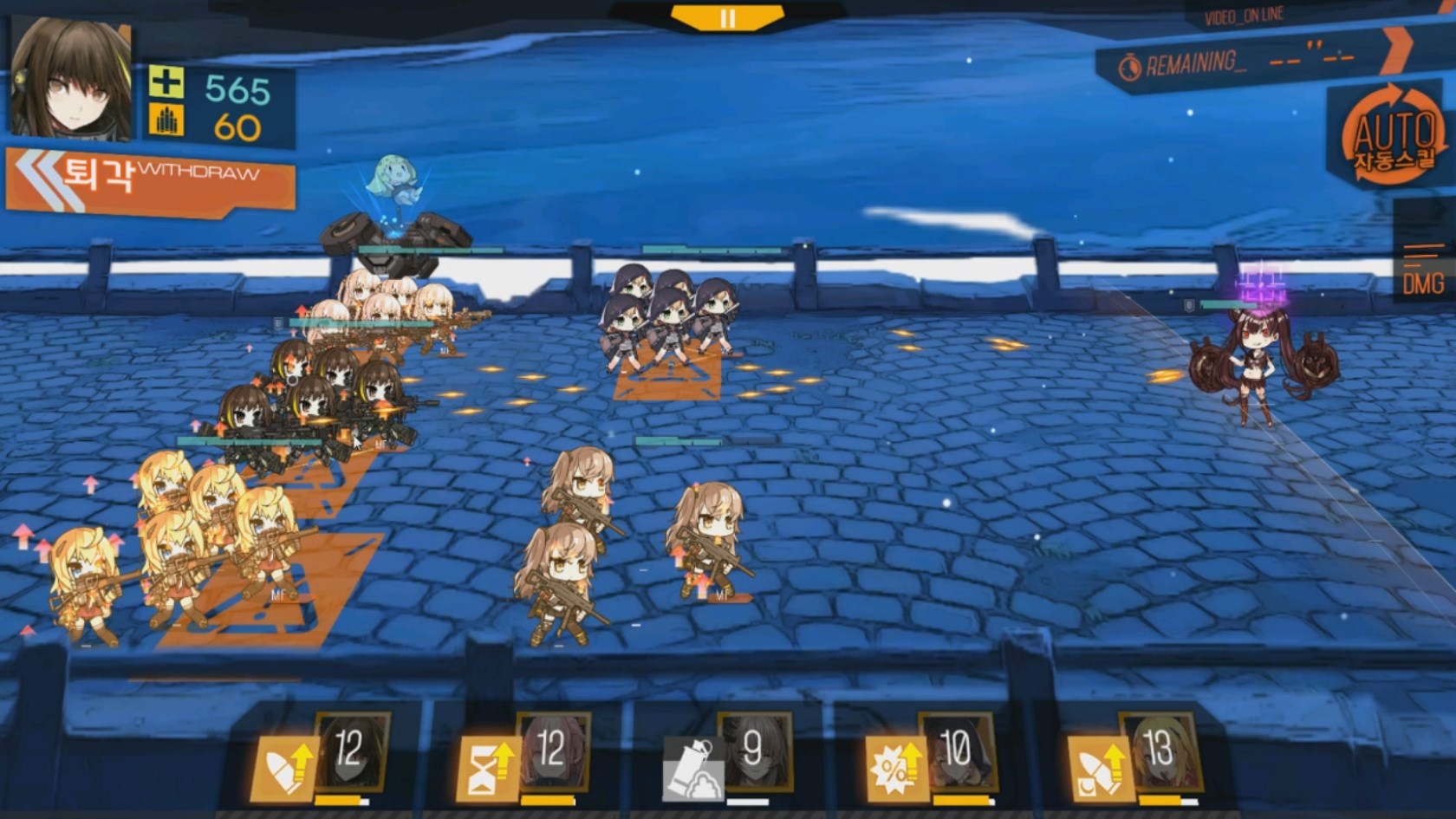 I'm not too sure about what %s she does these missiles at, as I cut through her HP pretty quickly. Namu wiki didn't specify as well.

She also comes in with some Manticores, but they also suck like Architect's Manticores.

Like other bosses in Cube+, Ouroboros is a good candidate for throwing a bamboo spear at.

Here's a video of me clearing this map

Author: Kazuki
Tags: Operation Cube
Girls Frontline and related trademarks are Copyright © 2015 SUNBORN Network Technology Co., Ltd.
This website and its staff are not in any way affiliated with it for obvious reasons.