DD's ranking map is, as always, unlocked by clearing out all the story maps. It's a 15 turn long map where you get points for meeting various objectives, and your highest scoring run is counted for ranking purposes. 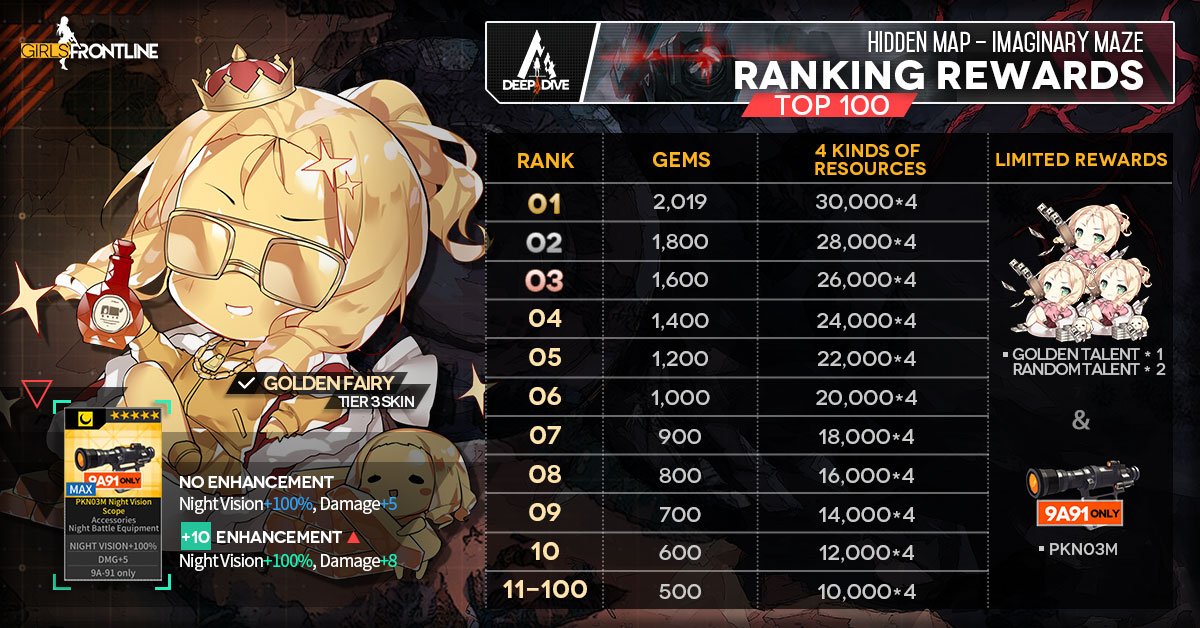 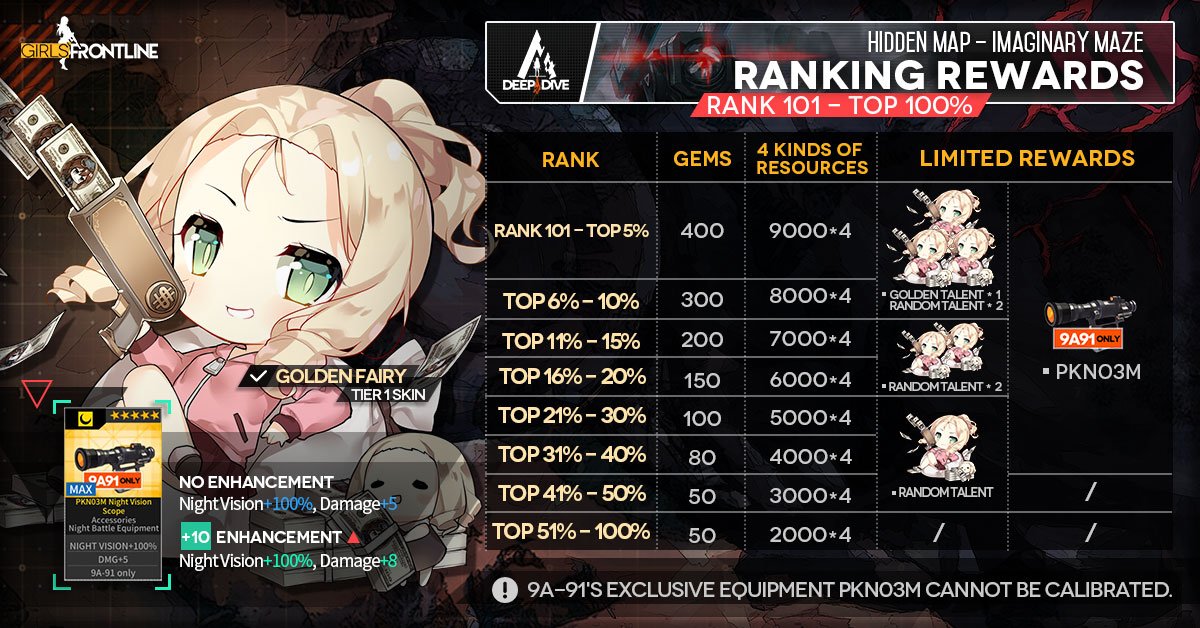 With EN's run of Deep Dive, Mica pulled a surprise on everyone by giving it the scoring system they'd been using on newer events on CN/KR instead of the original one. That means you get points for:

Note that you do not get a chance to encircle nodes at the end of turn 15.

CP and rally point are no brainers, you should hold onto them anyway to get supply line points. Because using a supply drop gives you an effective point reduction, avoid using them for your points. Luckily the map has enough heliports that this shouldn't be painful.

For the sake of kills, the original CE of an unit is counted, which means you get the full points for killing depowered Jupiters. Two of them can be safely encircled without messing with enemy spawns (see below), and the third can be encircled and killed on turn 15… or suicide charged, at that point it really doesn't matter. 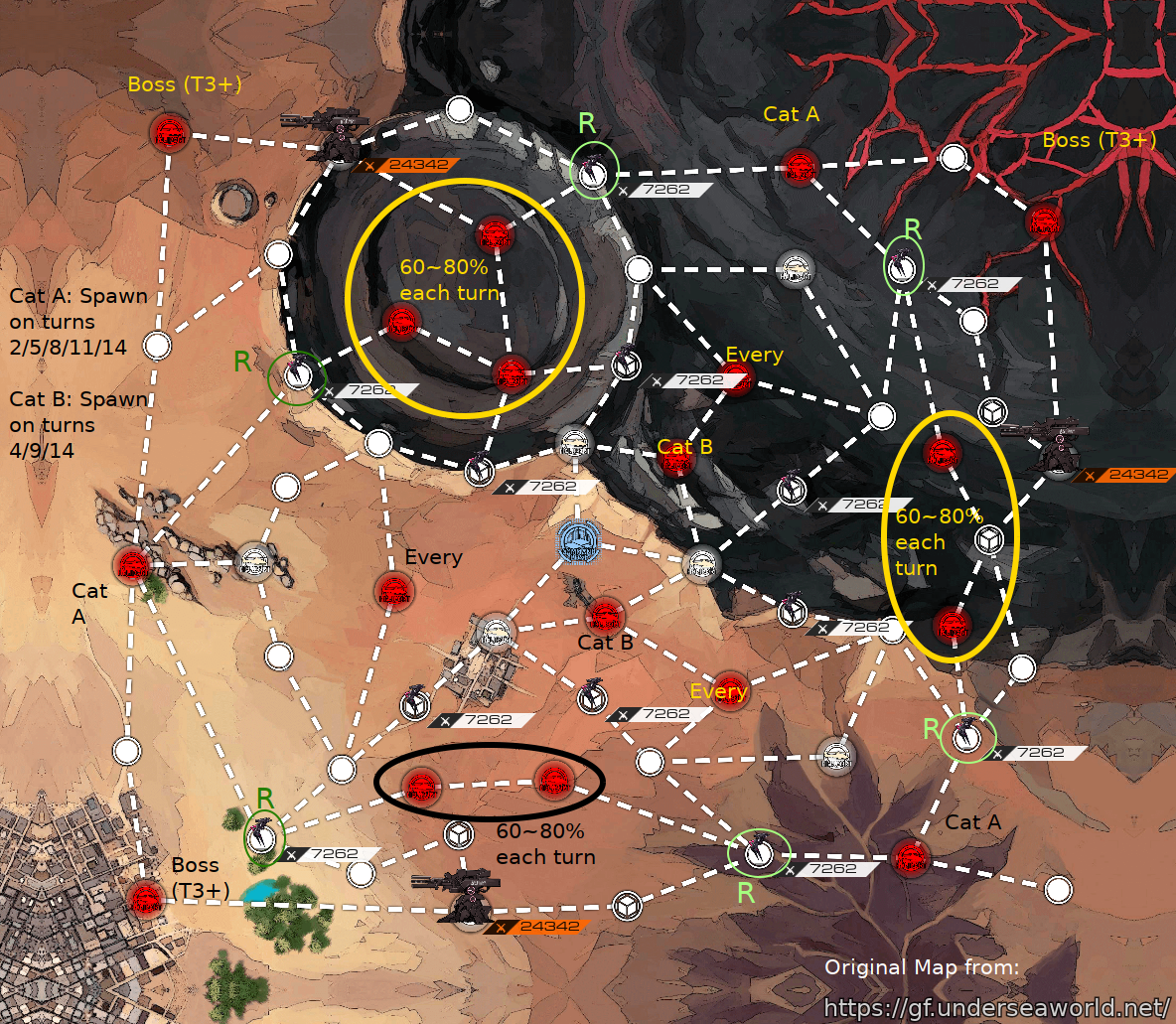 Lots of stuff here. Let's try to make sense of it:

Other than the rally point mechanic (see above), there's not much going on here: Enemies will continue to spawn as long as they can, and try to interrupt your supply line, which you will obviously reject at gunpoint. Keep trying to kill as many of them as possible, and keep their heliports unclogged to make sure they continue spawning while you clear out the map and take as much of it as possible. That prepares you both for the map control scoring after the mission's end, and lets you potentially establish a new supply line on the same turn it spawns, which gives bonus points.

Boss spawns are the only other noteworthy mechanic: Starting on turn 3, enemy bosses will spawn as soon as you hit a threshold. Per turn, only one boss can spawn, so keep an eye on your kill counter and try to make sure you don't kill so many enemies that you skip over a threshold and miss a boss spawn.

For non-boss spawns, you'll see quite literally everything in the book. Anything from Manticores to Brutes to Dinergate swarms to Jägers.

Given the enemy compositions outlined above, what you want is a mix of ARSMG and MGSG echelons, with the usual recommendation being at least 3 of each, better 5. Cerberus is the only ones that really want MGSGs, so you can pad out your roster with rifle echelons (ideally RoF RF) if you're short on MGs, but you better have a taunt fairy for them to tank. Realistically, you'll want to have one good ARSMG echelon to handle bosses, one good MGSG echelon for Cerberus (and tarantula swarms if you don't have airstrike fairies), and the rest to be able to handle the fodder.

Are obviously interesting on such a sprawling wide map, but their debuff is crippling even at skill level 10 and so you'll have to be careful with them.

With one fairy, you can start capturing the supply line from both ends at the same time, which lets you establish it much more rapidly – there will be a neutral heliport 2 tiles away from any rally point that you can drop to, and you can get a guaranteed Turn 2 supply line on 3 out of 6 Rally Nodes. (More will be detailed in the Additional Tactical Hints section)

A second parachute fairy gives you several options: You can use it to move an echelon from your CP to an adjacent heliport on turn one to save yourself one AP and get closer to establishing the supply line, while allowing you to deploy 3 echelons on turn 1. Alternatively, you can parachute to a boss heliport to better spread out your echelons and start sweeping enemies off the map faster.

If you have a third parachute fairy you can eat a bag of dicks. :< Deploy it for whatever option you didn't pick for your second airborne.

Any more than that is not just obscene lucksackery, but also most likely counter productive, as you're not gaining much from another debuffed echelon in bumfuck nowhere. You're better off bringing a fairy that's useful in combat (taunt, airstrike, etc.)

This section is provided to give some insight on how to run the map. Because of the random spawns, random enemy movements and the random rally node position, getting identical runs is almost impossible. What is possible, however, is to set up stratergic goals and tactics before and during your run to improve your performance.

Most of the things here are written right when they come into mind without actually checking what I wrote before, so here I wrote some stuff to clear some of the things up. Terminology used in-game such as Rally Point, Supply Node and Supply Line will not be mentioned.

With 1 Parachute fairy, all Rally nodes can be captured on Turn 3. Paradrop to any helipad (does not matter), spawn a second echelon and move it to any adjecent helipad. On the next turn, spawn a total of 3 echelons to secure the command base and all 3 surrounding helipads. You now have 10 AP and you only need 9 to secure any Rally Point.

[Bottom Left] can be captured on turn 2 with 1 Parachute fairy using the above tactic, but you have to capture the [Cat A] helipad instead

[Top] can be captured on turn 2 with 2 Parachute fairies.

[Top Left] can be captured on turn 2 with 3 Parachute fairies and the [Cat A] node. Honestly, if you want a turn 2 capture, just reset for a different rally node.

Author: Chiaki Matsuda
Tags: Autism Nobody Asked For This Ranking