Whatup you core lovin' fucks. You're here cause you're hard up for cores, right? Maybe you leveled one too many 5 stars to 90 and don't go to 100. Maybe you've went to the casino called heavy equipment crafts. Maybe you're just destitute like me. Point is, you need more cores than what you gain in leveling and it sucks. It's time to grind maps not for EXP, but for cores. Do be aware, these maps are a bit more difficult than just grinding stuff like 0-2. You'll be spending more resources than when you were grinding for just EXP. It be like that.

Note 1: I'm not covering maps that are mostly done for EXP (cough 0-2 cough). I think we're aware of those.

Note 3: Using a scam fairy may or may not improve your rates of getting cores on any of these maps. 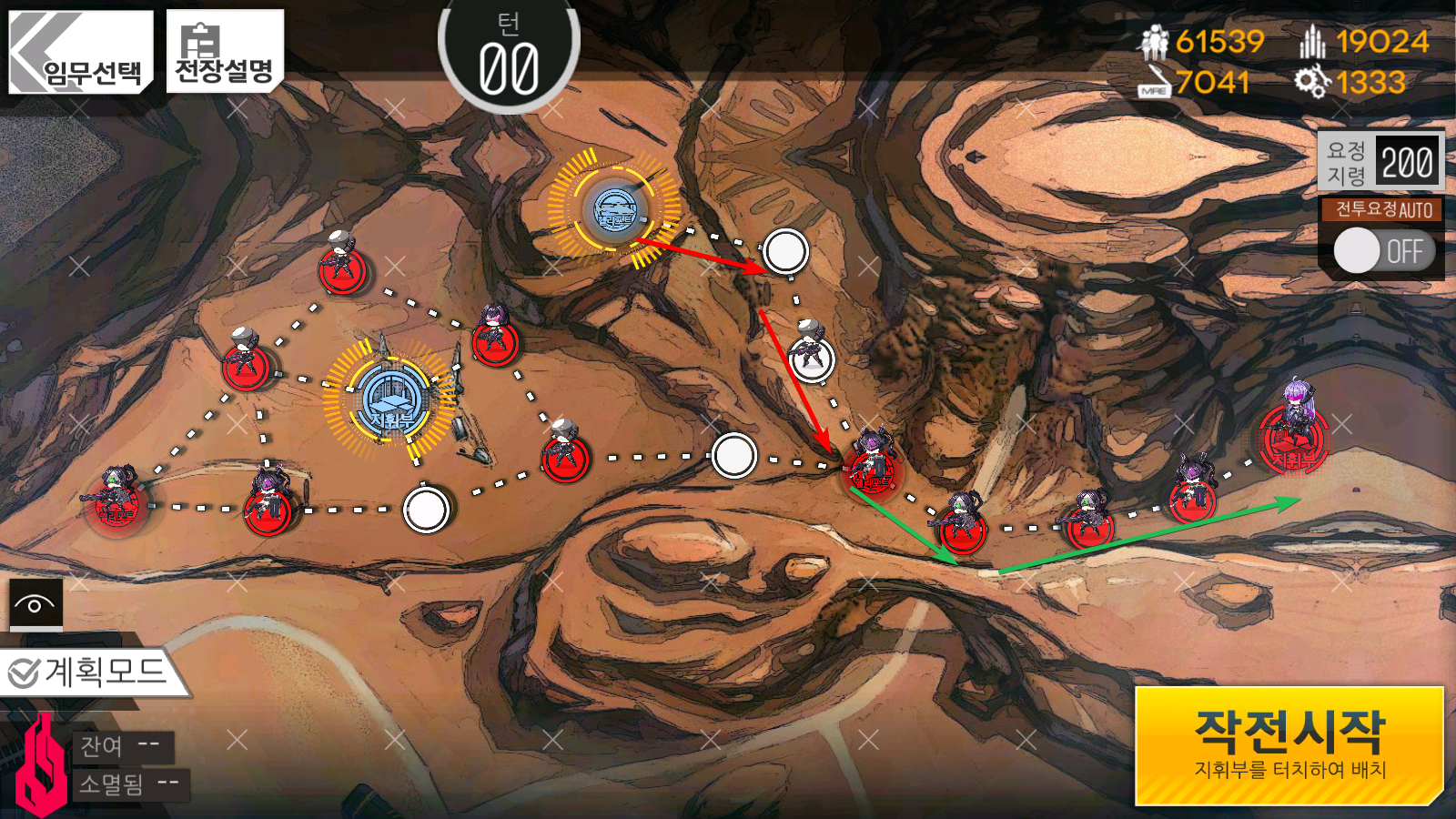 Expensive as FUCK
Not really afkable since you need to resupply

1 AR+1 HG can defend your Command Center.
You can full supply a regular AR/SMG echelon here if you wish to level stuff as well. You can also use 4 HG 1 MG as well for a slightly cheaper run.

Note: I'll be covering the 5 kill strategy for this. There's a 6 kill variant, as well as a 3 kill variant. 5 is the laziest method that allows for maximum not paying attention time. 3 kill is cheapest, 6 kill requires you to pay attention cause you need to resupply mid way. 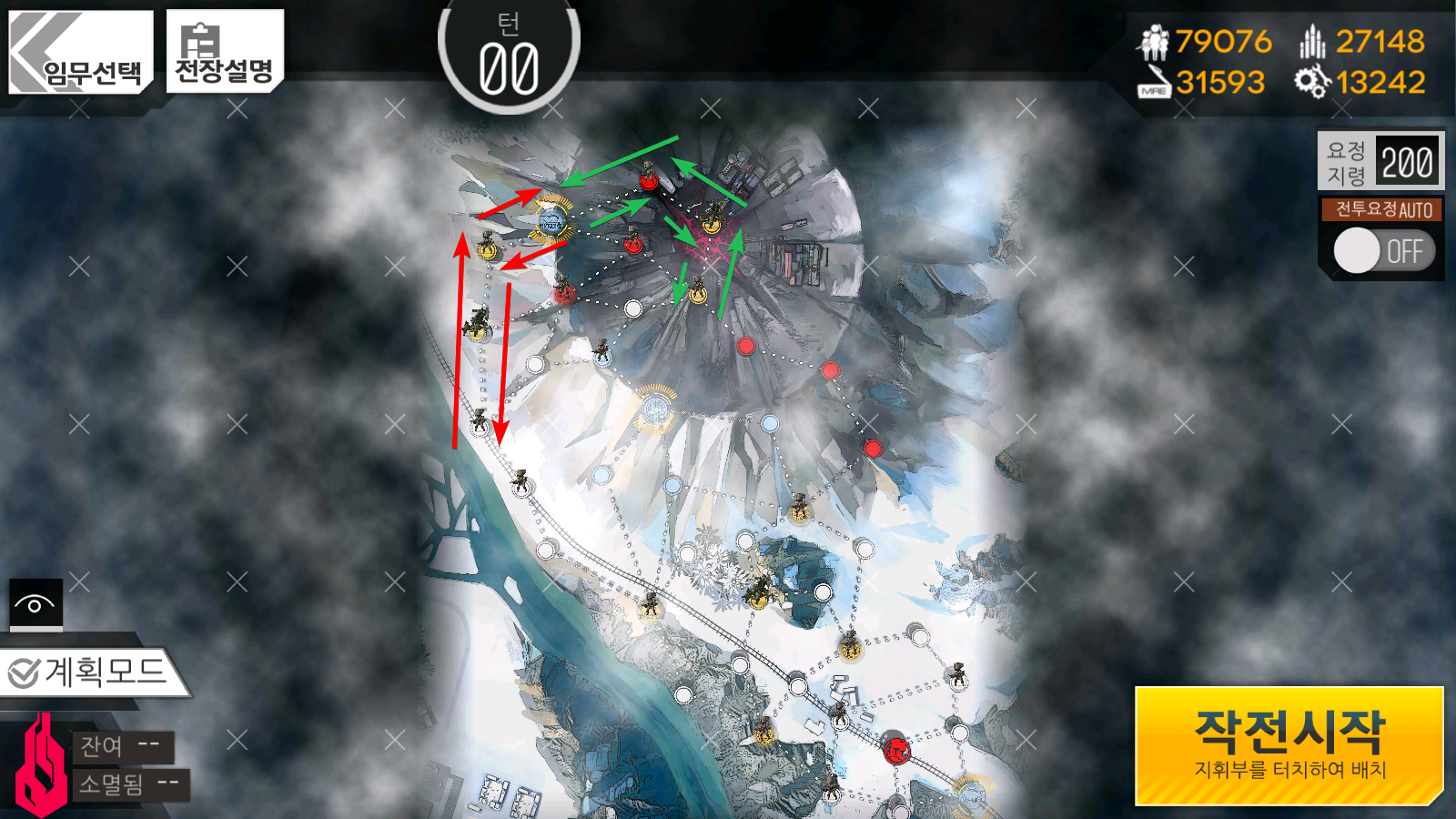 Ok this is the hot topic cause everyone and their fucking mother wants to know how to do this map. There's ten trillion different methods to do it and I'm not covering all of them here. I'll list a few of the main methods and explain how the fuck this works so you can think up your own setups if you lack stuff.

The basics for 10-4e is that you need A) something that can burst the Hydras down, and B) something that kills the cyclopses. I know, that seems like a "no shit" type of deal. But really, it boils down to that.

The first thing you should consider is the Hydra bit. Rifles are the most popular choice for this, as well as modded M4. Grapecano is the best option, since it enables cheaper setups, but you can run Lee Enfield/Mod M14 or IWS. Non-Grape rifles require more overall stats from HGs and fairies to successfully pull it off, so be aware of that.

The cyclops killing can be done by a lot of things. Strong HGs, an AR, or even a max skill level Airstrike fairy are all options for this. Modded M4 is exceptional at 10-4e due to her being able to fulfill both conditions for clearing.

You also need two dummies for AP on the heliports, don't worry, they won't get attacked. The enemies only reach them after turn 2, at which point you should have reset already.

Okay but lemme just preface this, you can fiddle with a lot of these comps depending on how strong you are. Corpse dragging this is possible, but you'll need to be fairly well equipped to do so. Please understand your limits and make adjustments to these comps if you can. Most of this stuff isn't set in stone. 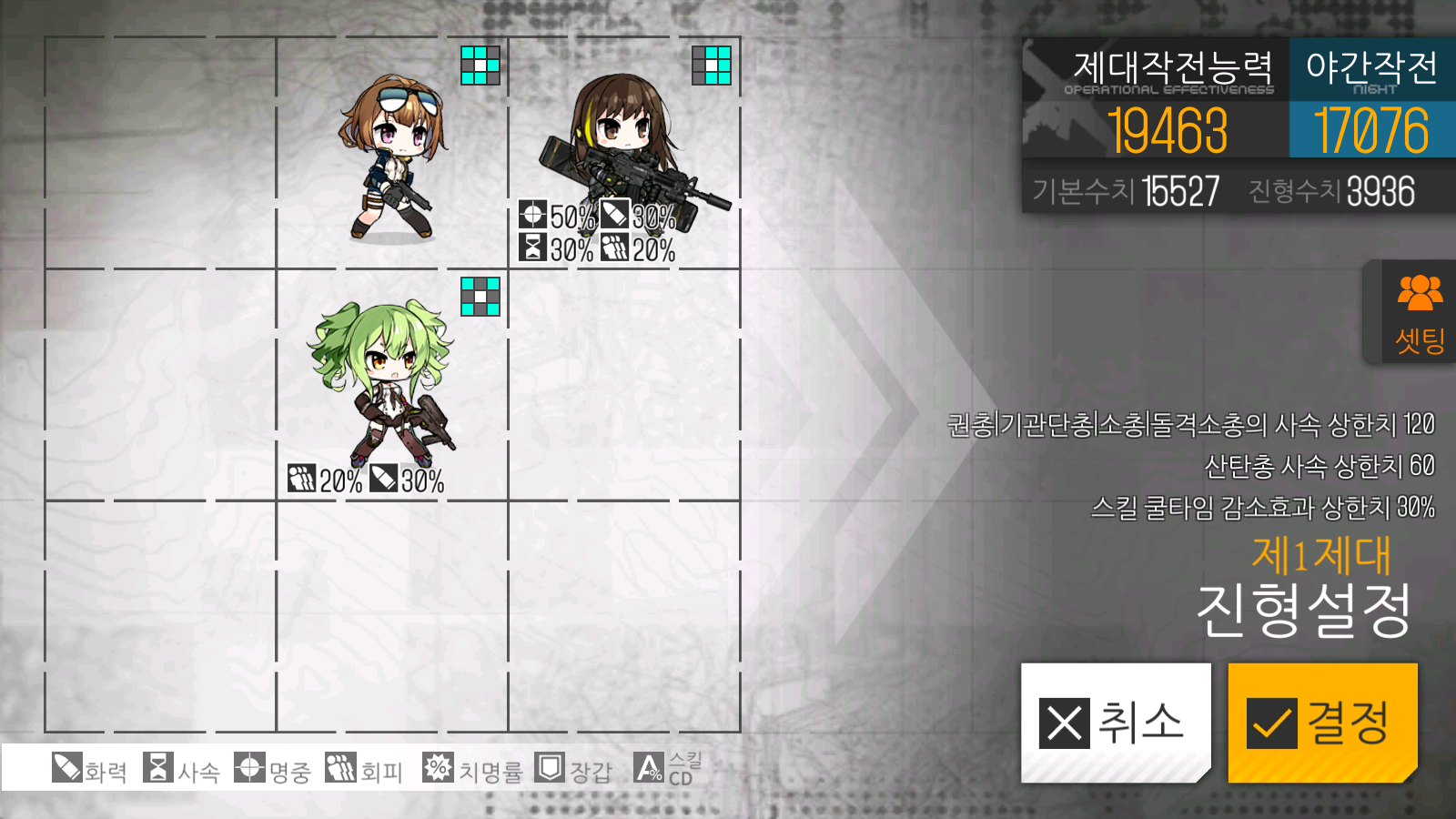 This is probably one of the more entry level methods for doing 10-4e. M4 does both the enemy clearing and the Hydra killing. You need Calico and Grizzly to buff her to be strong enough to do all that. Pretty static, but you're likely to have the shit for this lying around. There are other comps that work as well, but these are the super basic ones everyone probably has.

(Pretend the Deagle is M1911 cause I don't have her modded) 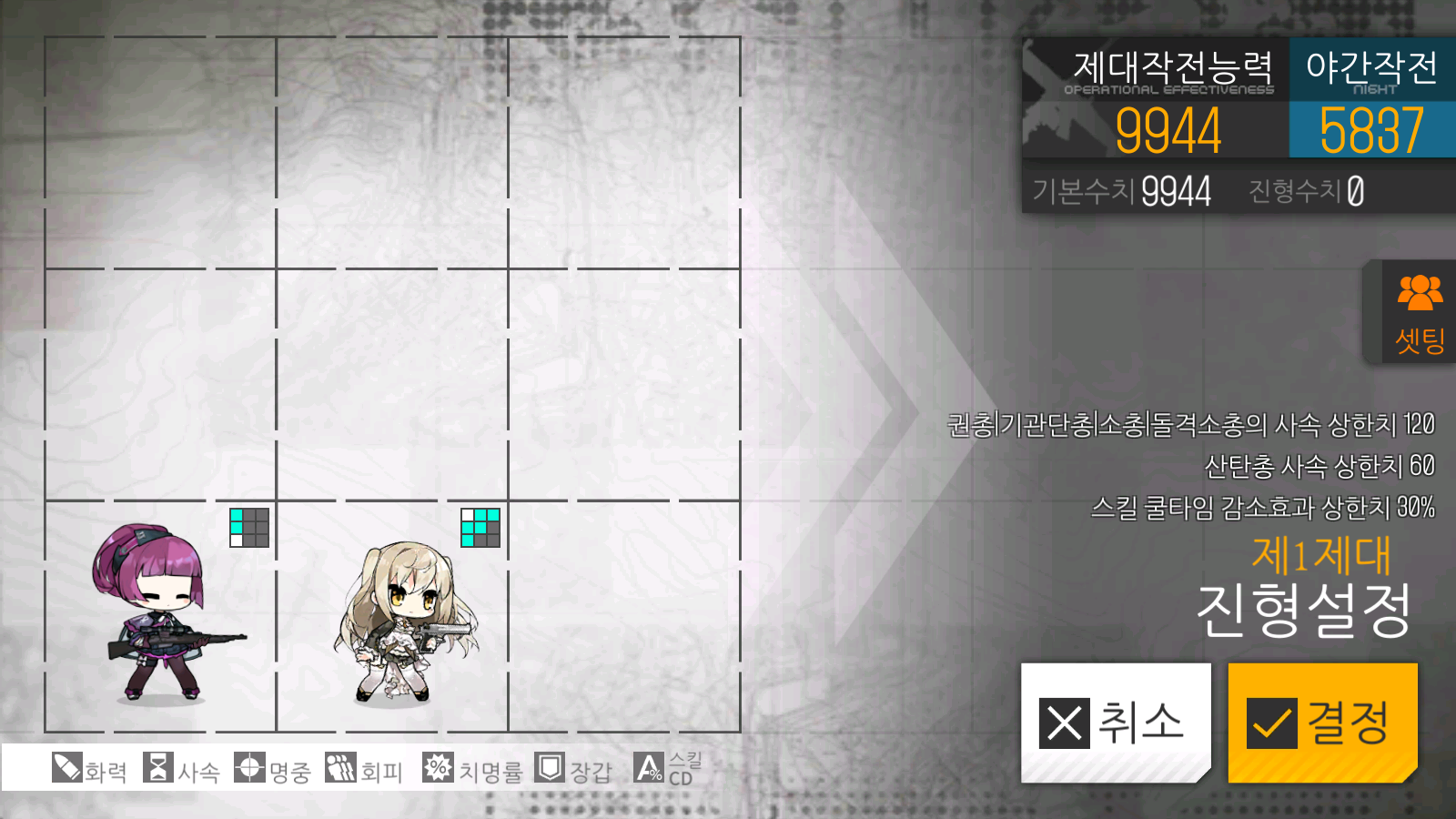 M1911 throws her smoke and blasts the cyclops. Grape then kills the Hydras, congrats you've won. No video because I don't have M1911 modded and doing it with Deagle sucks. Do note that you're required to have at least a decent fairy, something like 4*~5* Artillery, for M1911, and have her 2nd skill leveled up. 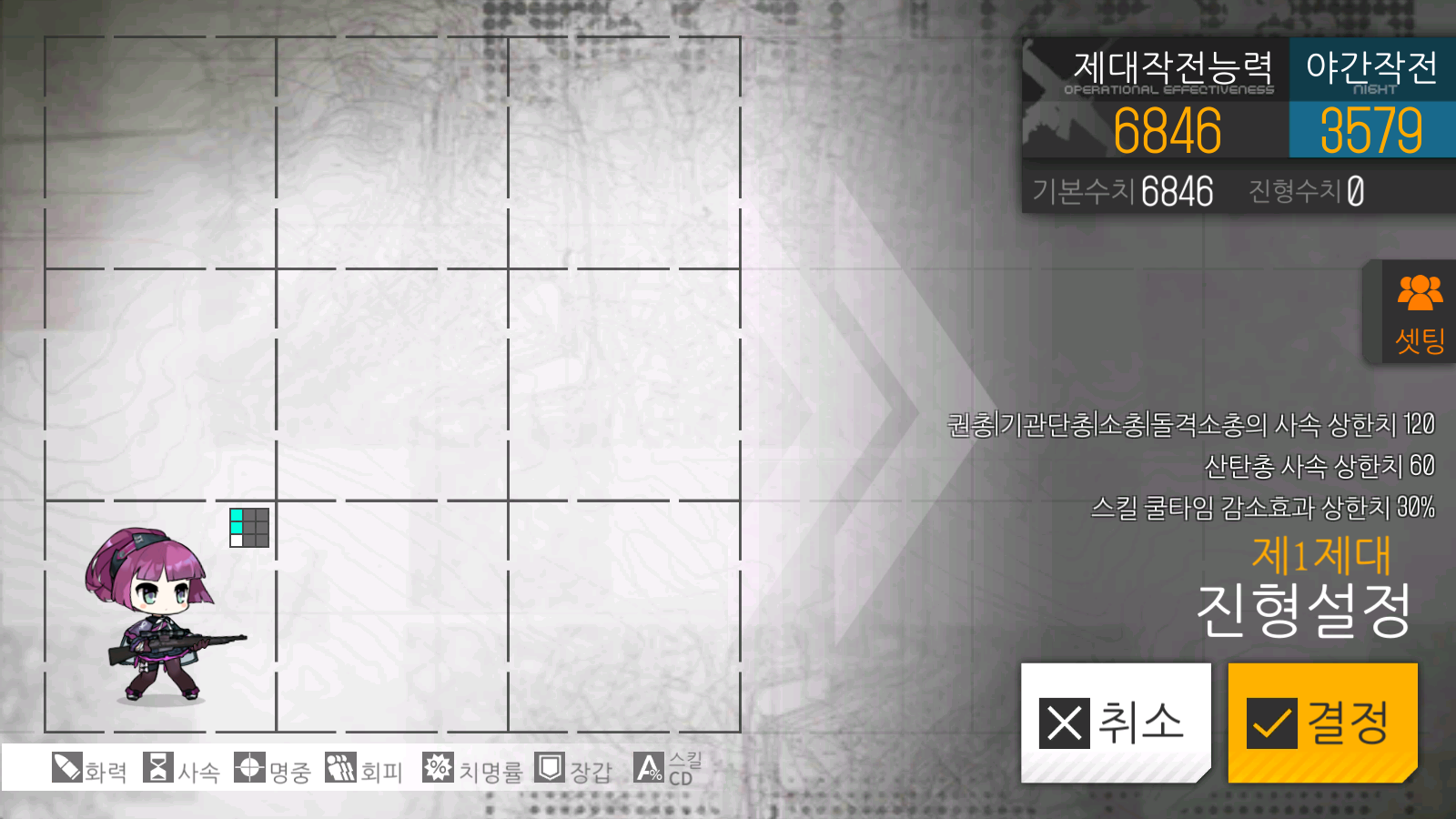 With enough FP (~235 after FP multipliers), Grapecano can solo Hydras. Airstrike can solo the Cylcopses. Spend fairy commands, get paid. Requires a SL Lv 10 airstrike fairy. Add a FP HG in front of Grape if she doesn't have enough FP.

Extra Notes: Due to the existence of a 4 Hydra stack and Link Protection, Grape needs 9k damage on her skill to guarantee a kill on the 4 hydra stack, which, including damage variance (-15%) and armor (it doesn't pierce armor) you need 200 + 30 + ~3-5 FP to guarantee 9k damage. You can add a HG to get there, but note that, due to their timings, the FP buff will always end before Grape's shot on the 4 hydra stack lands, so only the HG tiles will take effect. Depending on your fairy, this may or may not be good for you. A lvl40 2* Airstike with K5 will bring you to 221 FP, so the requirement isn't too high (just get more fairy ranks or levels), and if you do enough damage after her skill shot you may just kill the last hydra off anyways. 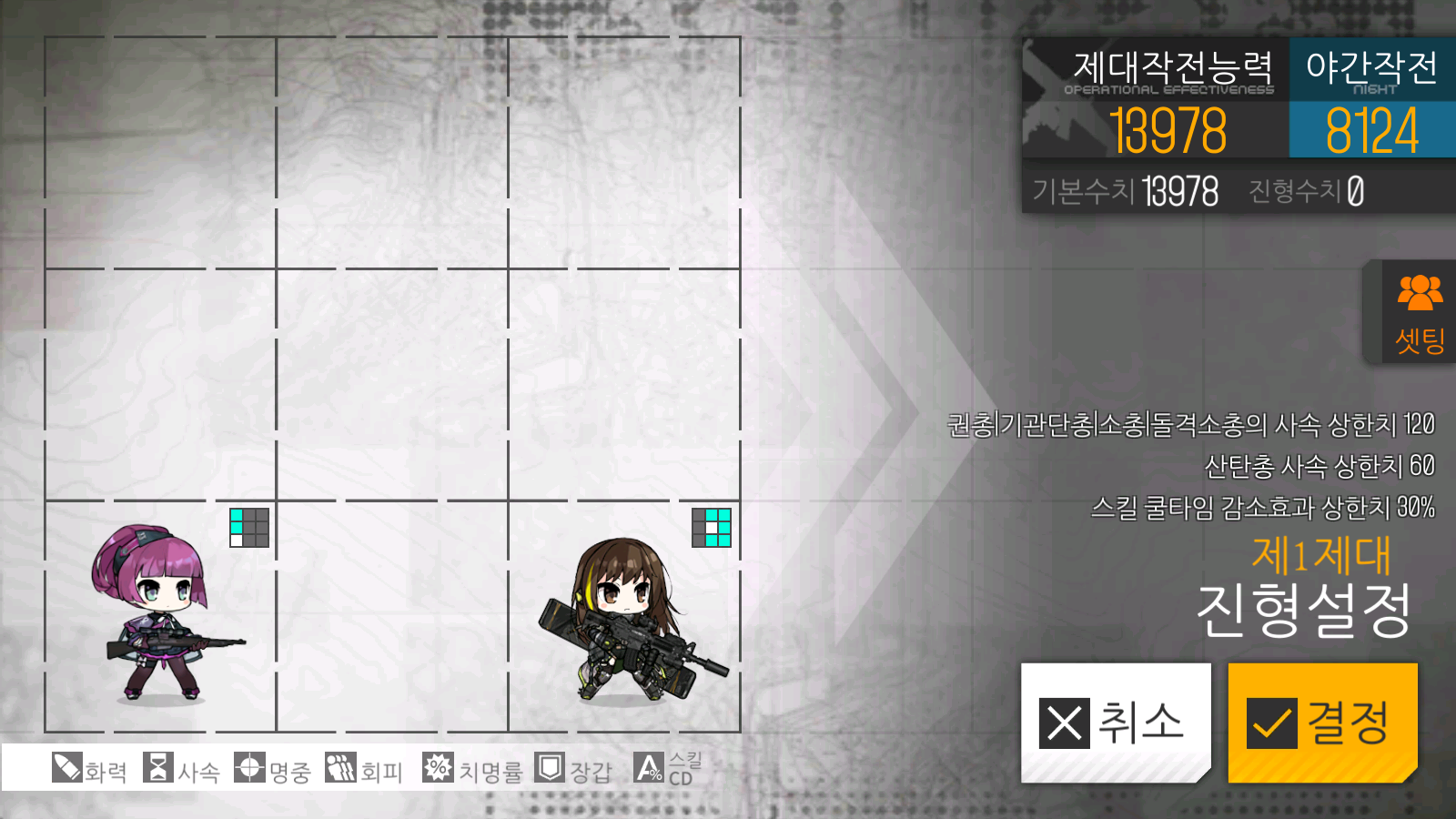 This is the most basic of formations that can afford an extra unneeded doll you can level. Stick anything at 2 for a little bit of exp grinding to go with your core grinding. M4 will be taking the brunt of the Cyclops' attacks, but it's fine cause she has armour. Requires a slightly leveled fairy (2 star Arty works) 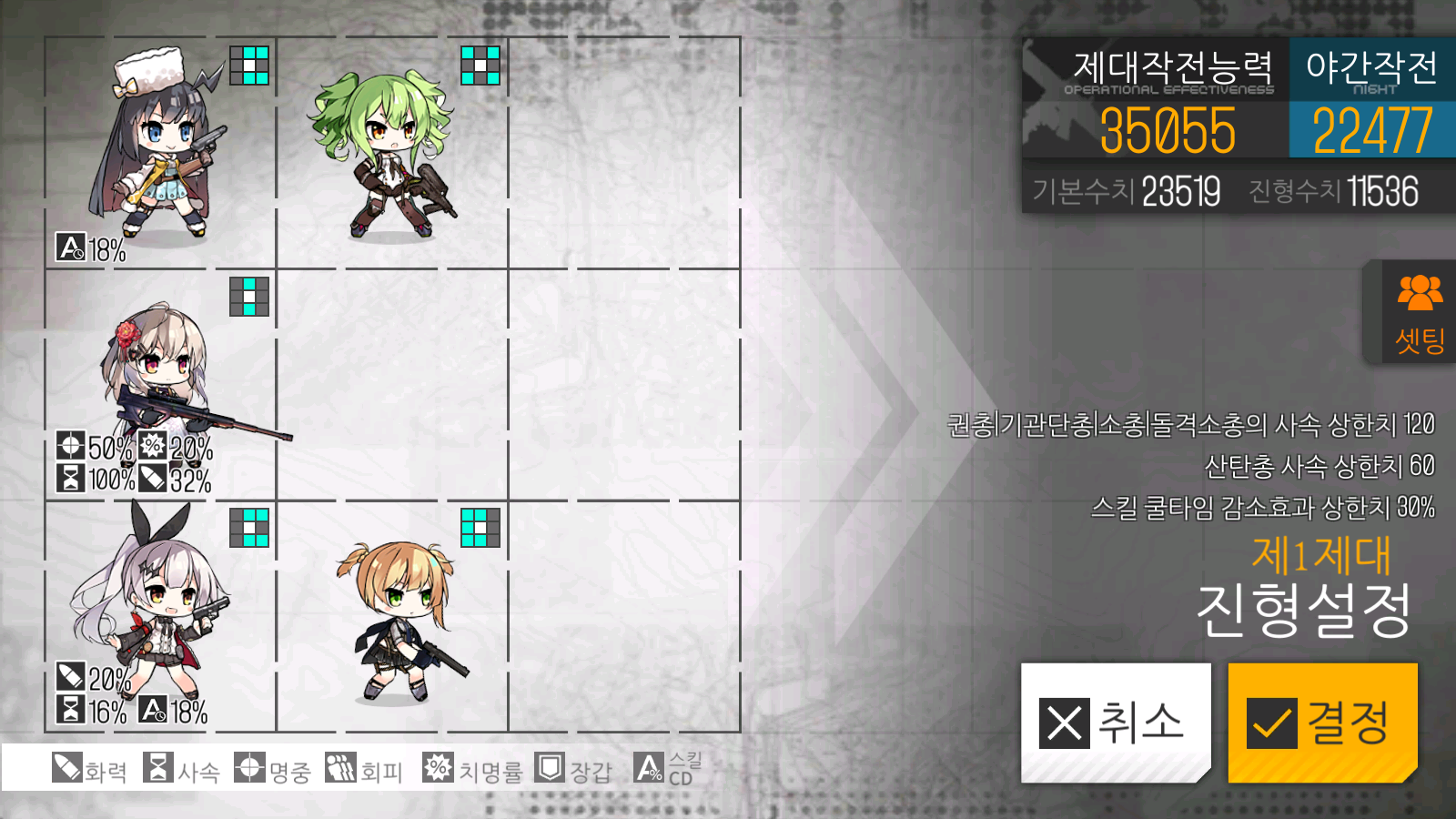 There's nothing special about this. C formation is for slightly more safety. 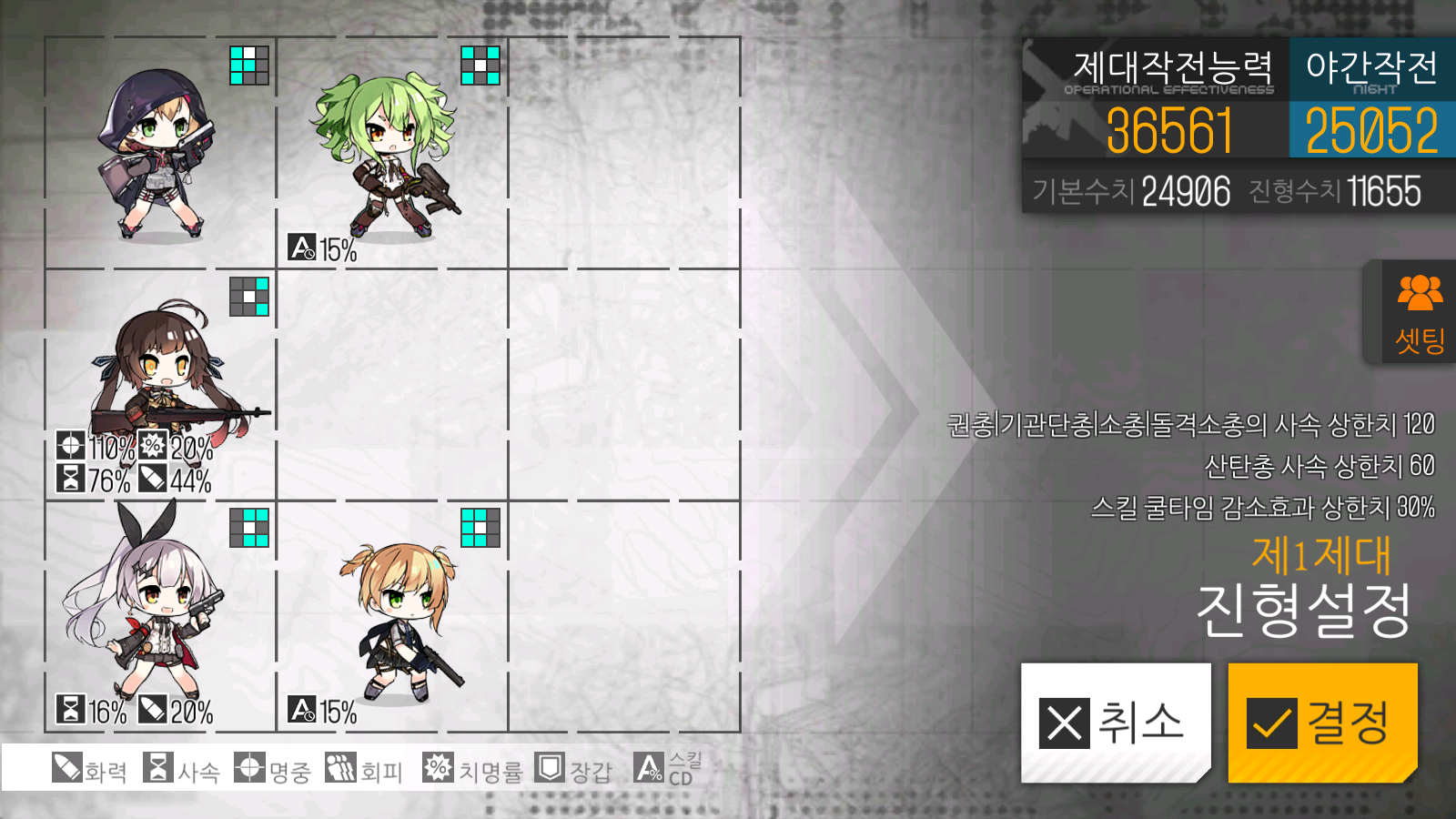 It's the same thing as IWS more or less. I honestly wouldn't bother making this as a note but I feel like it's at least somewhat notable that you can do it like this. Enfield works too and is cheaper to get than M14 mod. Really, any good FP rifle works for this.

PS: If you're reading need this guide, I don't think you can afford to corpse drag this map. 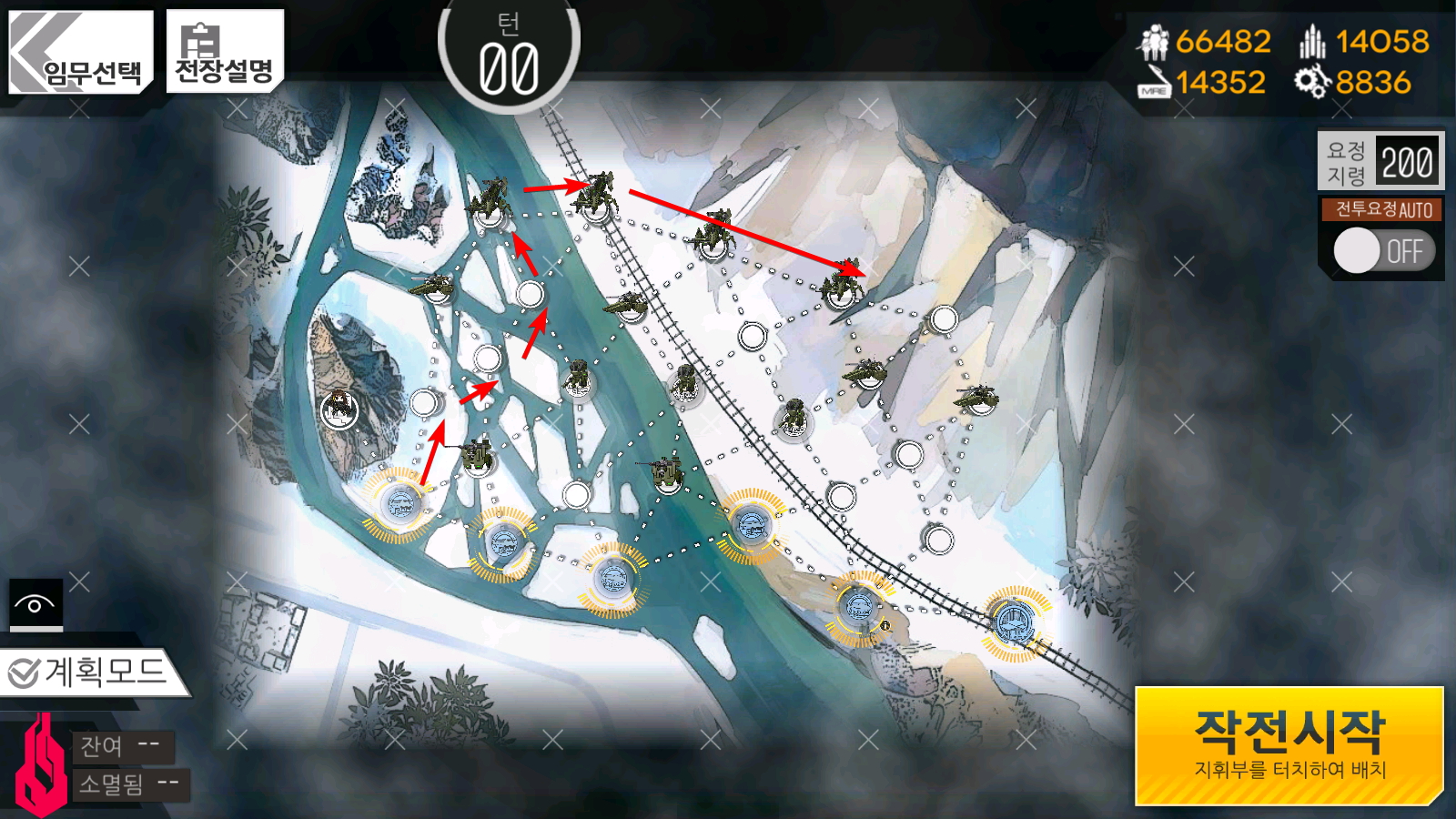 This is kinda the same shit as 10-4e, really. Grapecano can solo the Hydras and the Cylcopses if you pad her buffs enough. Enough said, really. This one's a quick one turn and done. I think this is marginally easier to corpse drag over 10-4e when you're using grapecano but I'm not 100% sure. It's possible to level a T-Doll while you do this strategy as well. Probably best to to limit that to just one T-Doll however.

There's an alternative strategy that can make use of Lee Enfield/G28/Modded M14. This does require some 5* fairy action though, since it cuts it real close.

Are YOU a dalao that needs cores badly? Got a cool fairy? Yeah??? Well, sucks cause 11-6 is balls to run even with dalao fairies. You kinda want T-Dolls from Isomer to run this properly as well. No, really, I wouldn't recommend this without HS2000. And a 5* artillery fairy. You begin to see why this doesn't work well right? Did I mention this isn't even an afk map? You gotta work for that 1.5 cores per run!

Ok but on the real, you can do this with less, but you need to run more HGs and also retreat them. Still would NOT recommend this unless you're far too geared for reading a guide like this. I'll tell you how to ruin yourself anyways though. 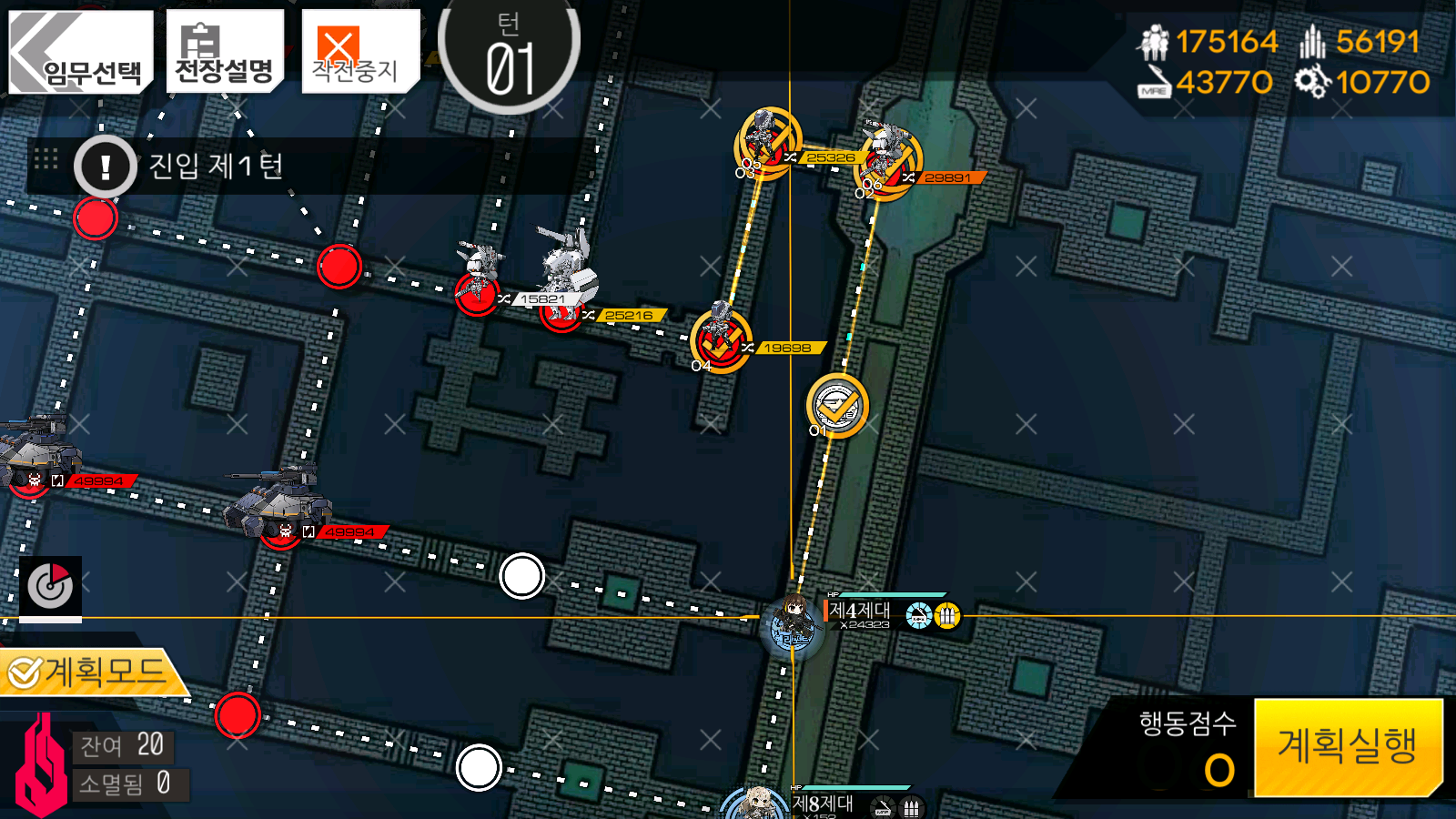 Turn 2 you need to deploy a friend echelon from the Heliport you've encircled so you can resupply to finish up the map. So...yes, you have a 20 a day limit for this. isn't that great? 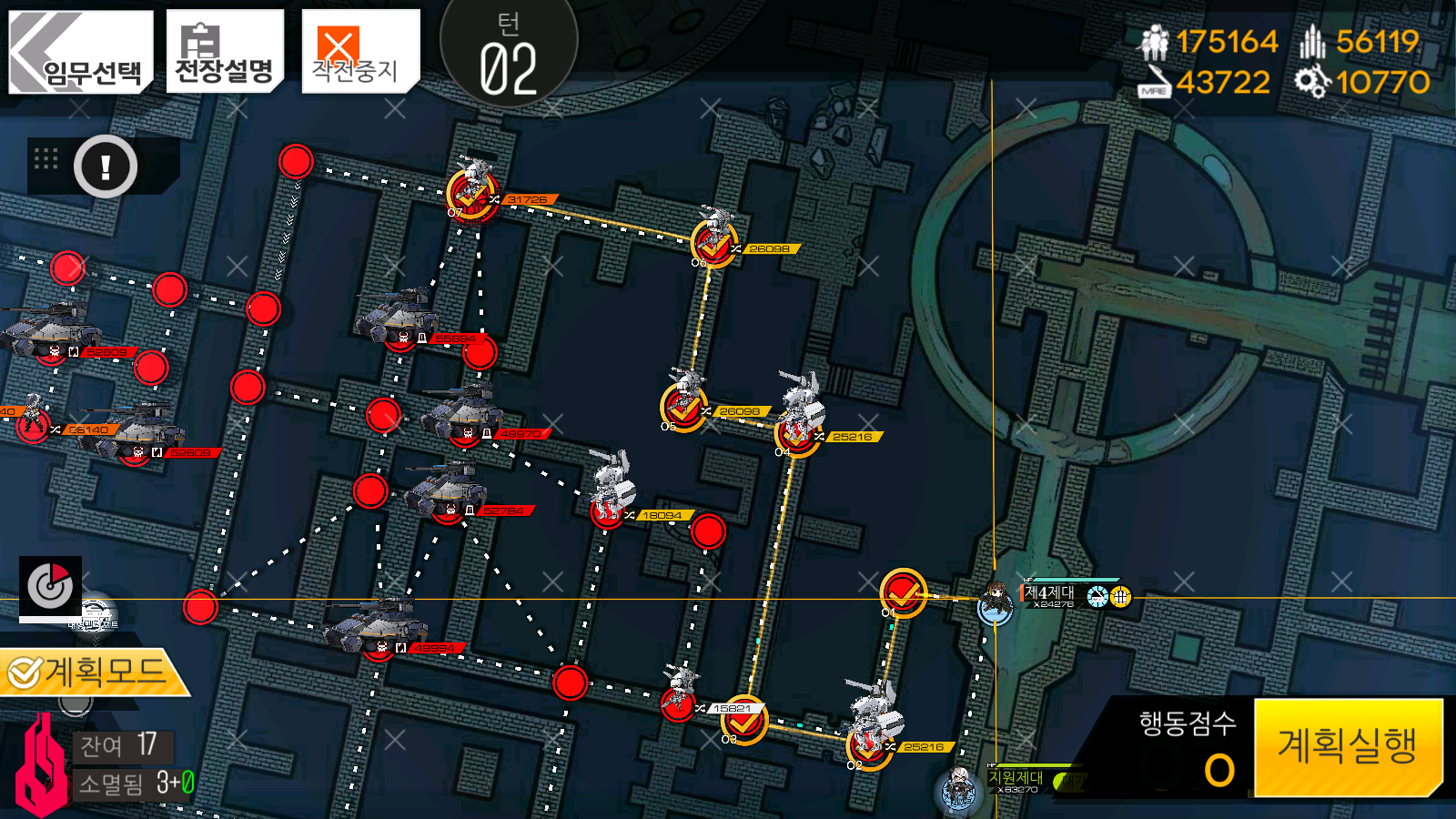 For this, you want to be using HS2000 and another HG with M4. If you're lacking in the damage department, use more handguns! And retreat them. It gets less and less afk don't it? The formation for the basics looks like this: 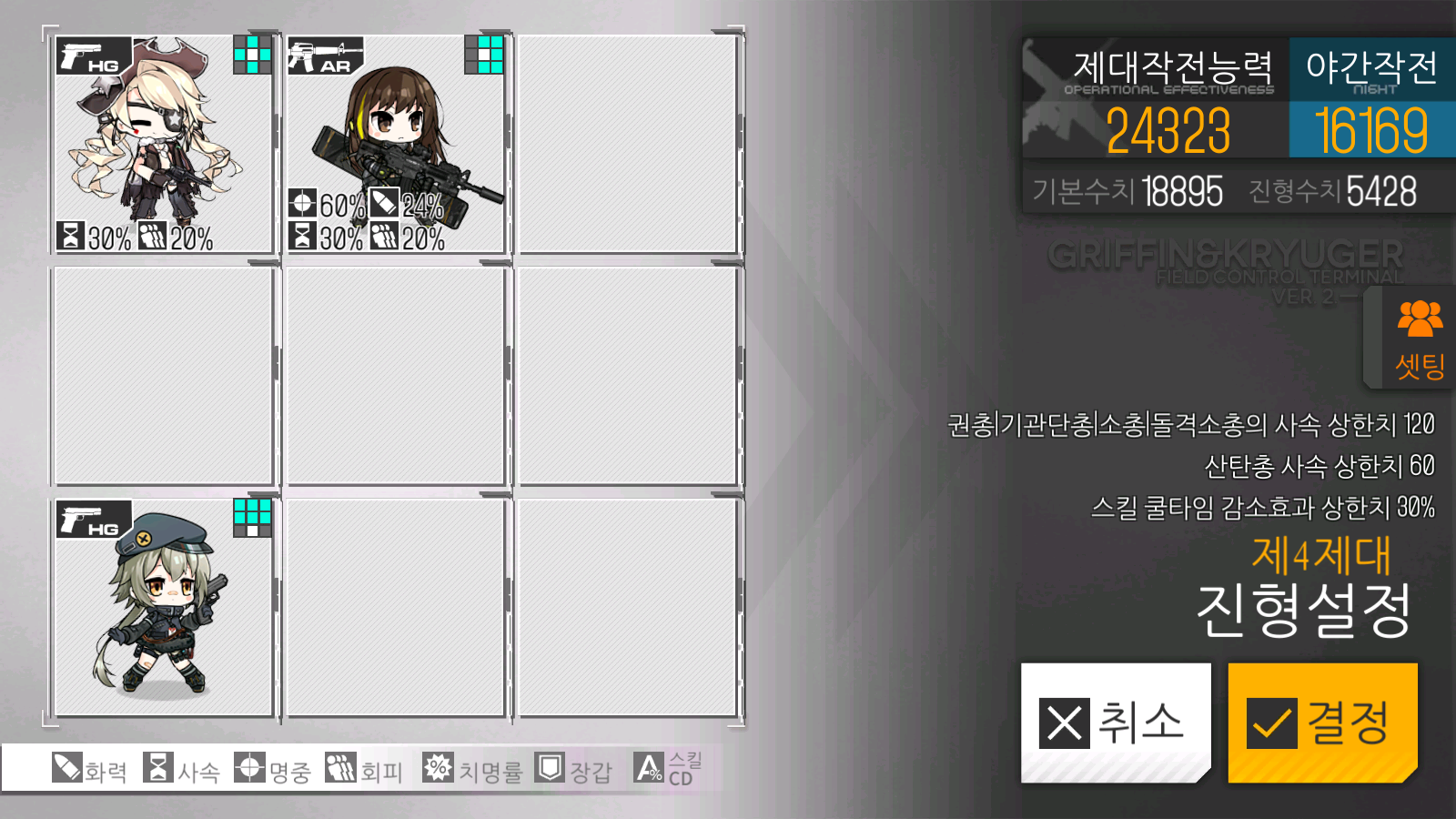 You can probably try and fiddle with the handguns to get it to work with other things or with lower rarity fairies, but that's on you.

Author: Kazuki
Tags: welcometothericefieldsmotherfucker
Girls Frontline and related trademarks are Copyright © 2015 SUNBORN Network Technology Co., Ltd.
This website and its staff are not in any way affiliated with it for obvious reasons.