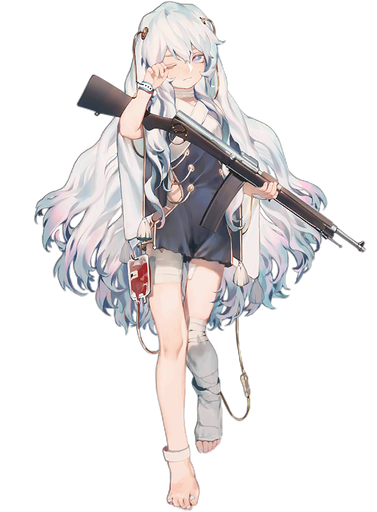 When her artist read up on her, she was kind of horrified and drew a weak-bodied hospital patient who hates her defective form. In the actual game, she is a stupidly good performance AR-buffer. Her skill is somewhat peculiar, because she does not buff herself, but she more than makes up for it by turning the other two ARs into veritable murder machines. Presumably because the other ARs are horrified at the thought of her dying out with them and wanting to kill the enemy as soon as possible.

"How the fuck do I pronounce this cheese eating surrender monkey crap?" Gunjesus to the rescue:

Good for most-non boss battles mainly due to how potent her skill buffs are. She is less useful when you need to move, but unless if you already have cap ROF before her buff, she is more potent than Grizzly. (Although you lose the 20% EVA from using Grizzly, which might be better depending on the situation).

Just note that because you need your DPS right beside her when she activates her skill, and because of her terrible uptime, she is less useful for longer boss battles which you aren't trying to burst down the boss.

Her skill can actually buff non-ARs as well, since the condition is not "units affected by her tiles" but "units situated on her tiles", although how useful this is is pretty debatable, since you lose out on the tile bonuses when buffing other things.