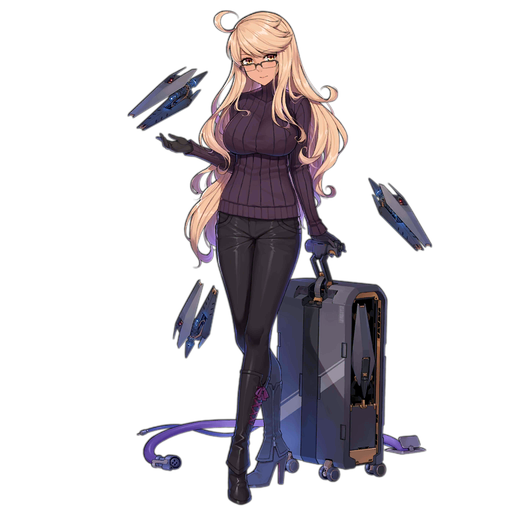 And everyone's favourite "Security Consultant" apparently learned from the Barrack Obama school of physical security. "When in doubt, send drones to fuck it up."

As far as MGs go, it works alright. Needs her special equipment, but she has decent stats and ok buffs, especially when you consider how high her stats actually are (95 firepower with her gear, before any other modifiers) compared to other MGs (the highest base is only 102). She also has 31 base hit, which means like PKP she can use mostly critscopes during the day and potentially gives her surprisingly competitive (actual winner depends on fairies, support, and enemy targets) DPS compared to even M2HB or PK during day battles.

With the Brandtini, her skill lasts 1 additional second. This is actually pretty alright and if you're running MGs, makes a decent enough 2nd volley MG drink (a first volley one will never work for obvious reasons). This is actually pretty decent, as she only has 5 seconds worth of ammo anyway. The 75% buffs-for-6-seconds MGs would have worked better if MGs could fire for more than 5 seconds at a time (MG3 doesn't count)

Comparable to Type-88 GPMG, and the pair are fairly even with Alma being better in shorter fights and Type-88 slowly getting ahead once you get to the 4th Mag or so. Type 88 does have an easier time with full K type formations though. YMMV.

Using a similar setup as for our equipment guide:

Either way, Alma's performance on the first magazine is okay, but nothing too impressive. She's an option if you're short on MGs, but won't be your first choice. She only really shines when you need her second mag and/or armour buffing.

…which EN doesn't yet. We'll give full rundowns on the Alma vs. Type 88 vs. Chauchat stuff once that's actually relevant.