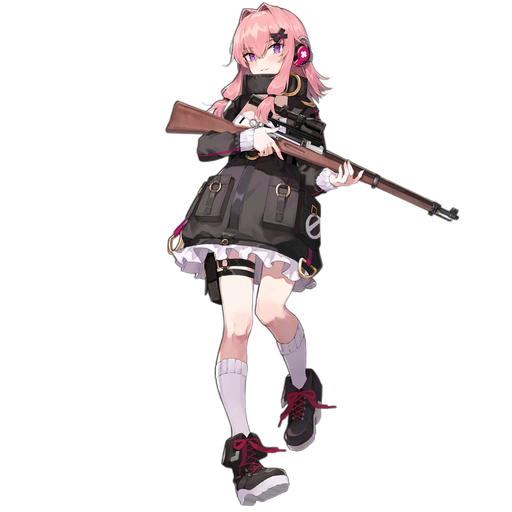 A swiss straight pull bolt action that SOMEHOW apparently fires faster than Semiautomatic rifles (She literally shoots faster than WA2000). That joke about the swiss replying to the Germans that if half a million of them invaded, the quarter million strong militia would shoot twice and go home? Someone sure took it to heart.

The downside of course is she debuffs her own accuracy when she does. This is not a problem during the day, and usually isn't a problem vs armored enemies, but it does become problematic when enemies at night start having dodge scores even while armoured, making her less good at those sorts of targets. In broad daylight though, go nuts.

Also a lot of artists seem to give her yandere qualities for whatever reason. Probably the knife.

If you're actually worried about hitting stuff at night though, you can generally smash enemy evade with an evasion debuff along with some +acc, and it'll handle most things. During the day though, it is seriously not an issue except vs very rare and specific opponents you'd send specialists for anyway.

On a somewhat more comedic note, some KR users who were unfamiliar with the military wondered if she was a Korean firearm apparently, because of the "K" part of the model designation (because Korea uses "K" for all its gun model designations too. because Korea). She was also mentioned to resemble Astolfo, which may or may not make her more a waifu for some people.

Note that using her means that you're playing with link protection more. Still, she has somewhat decent base ACC and many HG buffers do give extra ACC, the most common examples being Calico, SAA and K5.

She can be either better or much worse at night, depending on if the enemy has EVA. Even with Calico and K5, against 15 EVA enemies (compared with 80 base ACC RF), her hit rate drops from 50.3% to 39.7%, which is almost a 20% average DPS loss, which her skill does not really cover. Just don't be stupid when using her.