Awwwwww shit MC Ouroboros back on the mic for another cube chapter. This time with infinitely more annoying obstacles! Remember Arctic Warfare? Yeah. We got mechanics from that now. Jupiters, one ways, more annoying boss mechanics that actually require some micro, and more armoured units than you could ever want. You name it, we got it.

With that in mind, how difficult is cube+? A good estimate would be around chapter 3 of Deep Dive. If you can clear that, you'll be able to comfortably clear cube+. But what, may you ask, is required to easily pass these maps? A quick answer is at least two echelons that can clear out armoured units. One of them could be an MG echelon, one could be an RF. You'll also want an AR echelon capable of cutting through armoured units, since you'll have some boss killing to do as well. (Yes, all of that should be at least Lv 90 and 5x linked.) Keep in mind, the majority of cube+'s maps are covered in armoured enemies, with a few exceptions.

As mentioned in Deep Dive, I'm not going to be limiting myself from now on for chapter guides. I won't do anything that wouldn't be possible for en players, so rest assured about that. 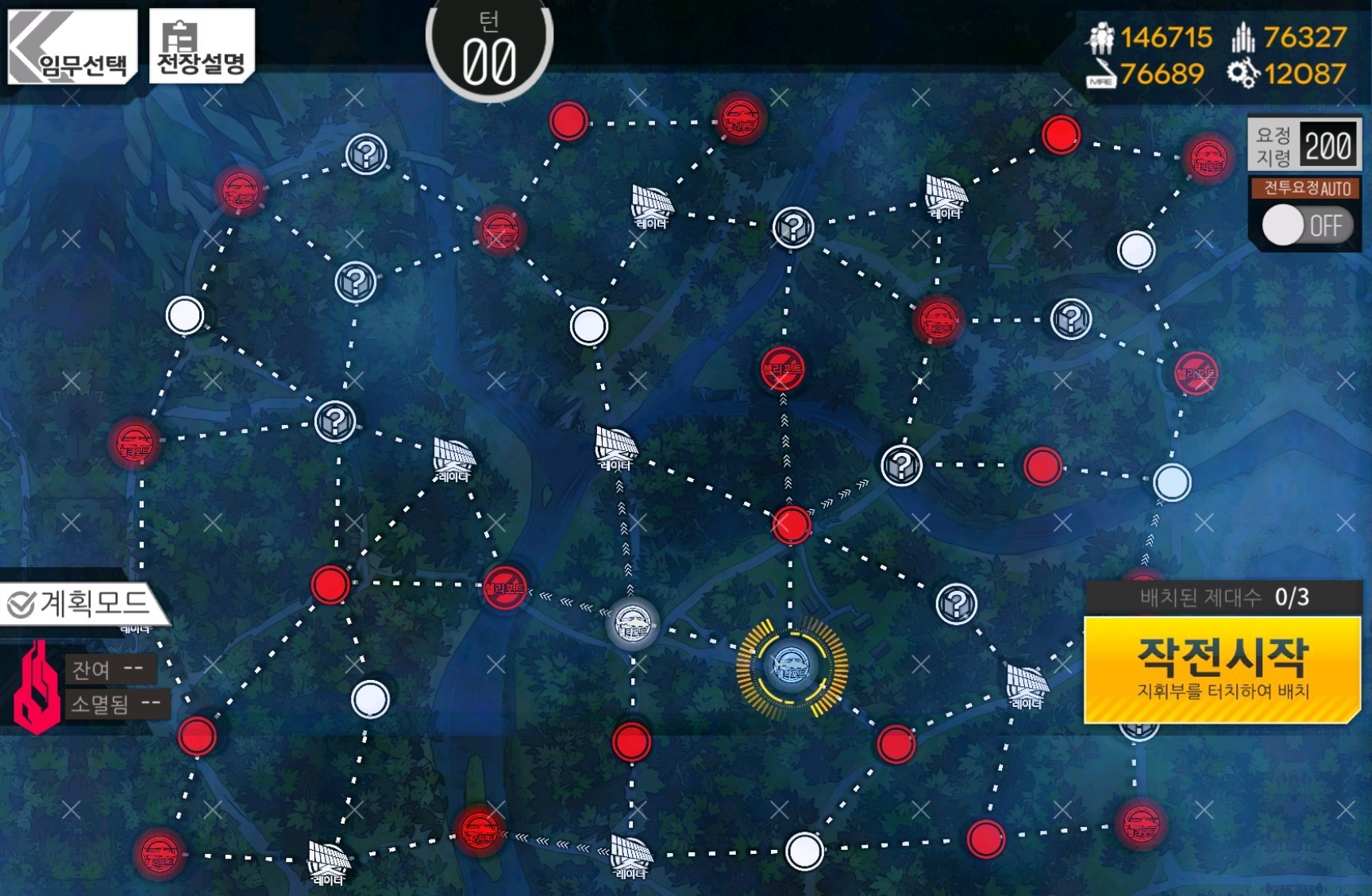 Your objective in this map is to hunt down Elite Hunter in this giant mess of a map. Fun. Thankfully she has a limited amount of spawn locations, and the turn limit lets you visit all of them quite easily.

Here's what I'm pretty sure her spawn locations are (marked with green circles) along with a general route to take to check each of them. (Purple arrows) 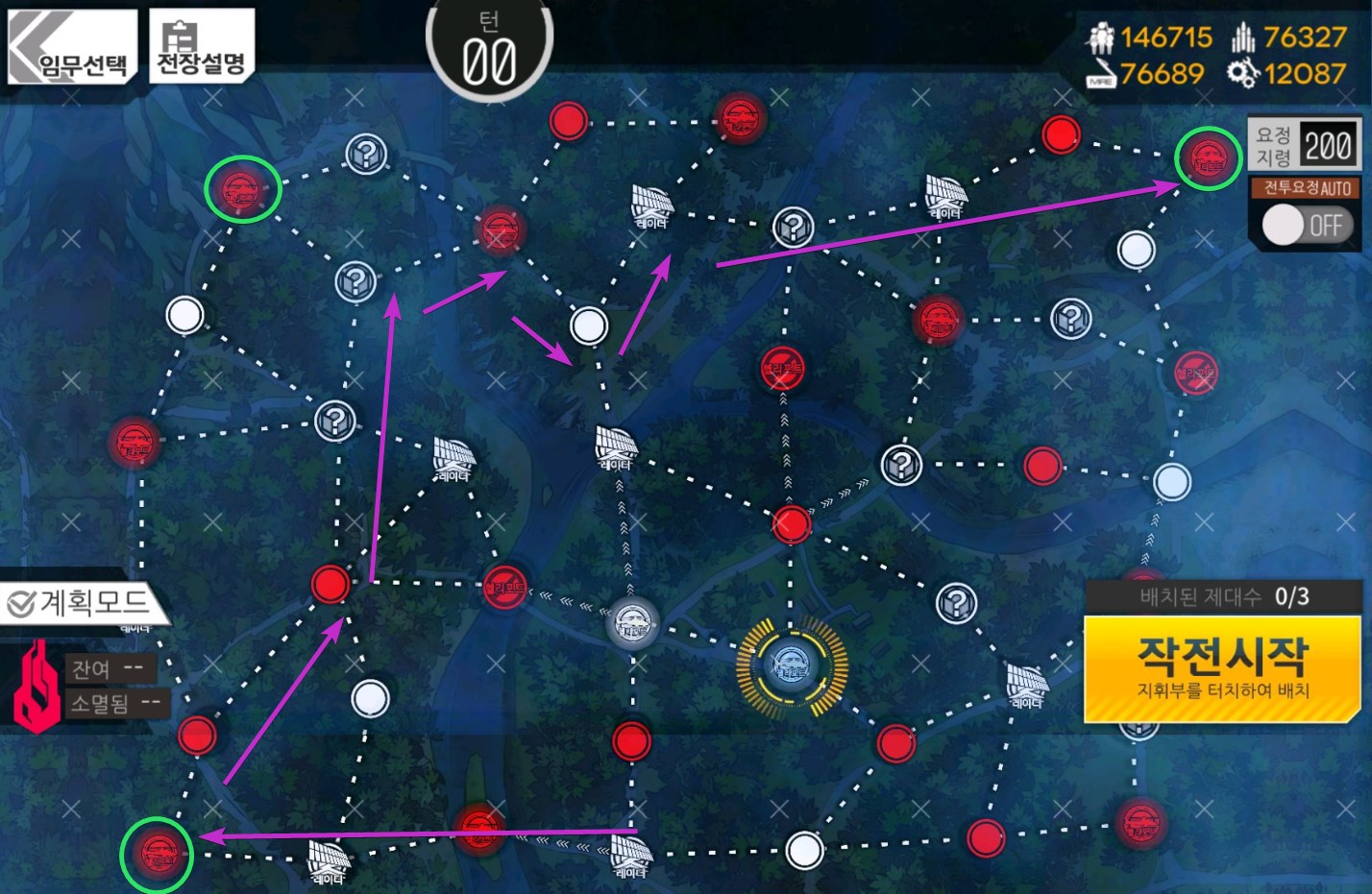 Honestly, the main reason why you want to use this route in particular, is because the top right spawn has an enemy spawn that fucks with Hunter's pathing and typically keeps her trapped up there. The other two spawns give her a bit more freedom to roam, so you'll want to look there first.

Here's some general tips for accomplishing this route:

Use one echelon to persue Hunter.

Take as many opportunities to resupply as you can with the echelon that'll be running the route. You should be good with one resupply, but be careful. You can take the heliport directly at the start of the route on turn 2 to give you ammo for the rest of the trip. If you absolutely need to resupply and Hunter is at the last heliport marked on the route, you can move back to the middle of the map to resupply there.

Have one echelon guarding the two heliports in the middle of the map, they'll function as a base as well as give you AP.

Elite Hunter is basically the same as regular Hunter, just with boosted stats as well as armour. She doesn't have enough armour to warrant anything special to fight her, thankfully. The only difficulty about her fight is that she spawns in right infront of your echelon with a pack of Guards and Nemeums. Worse that happens is that you take a bunch of hits from her, so it can get dicey if you're not too strong. However, she goes down quickly enough.