The last map of the operation, with a decently difficult boss for newer players or players not used to micro. You'll want to have two combat echelons for this, and ideally three dummy echelons. You can easily do it with two dummies, but I feel like it's best to do with three. Do note the echelon defending your base can be weaker, since you easily can quick repair there.

This map is also where the one way paths come in. If you notice in the picture of the map below, there's certain paths between nodes that look different. These are one paths that don't allow you to move in any direction aside from the one that the arrows are pointing towards. This also applies to enemies, but it's not too relevant for this map.

The objective for this map is to defeat the boss, Elphelt. 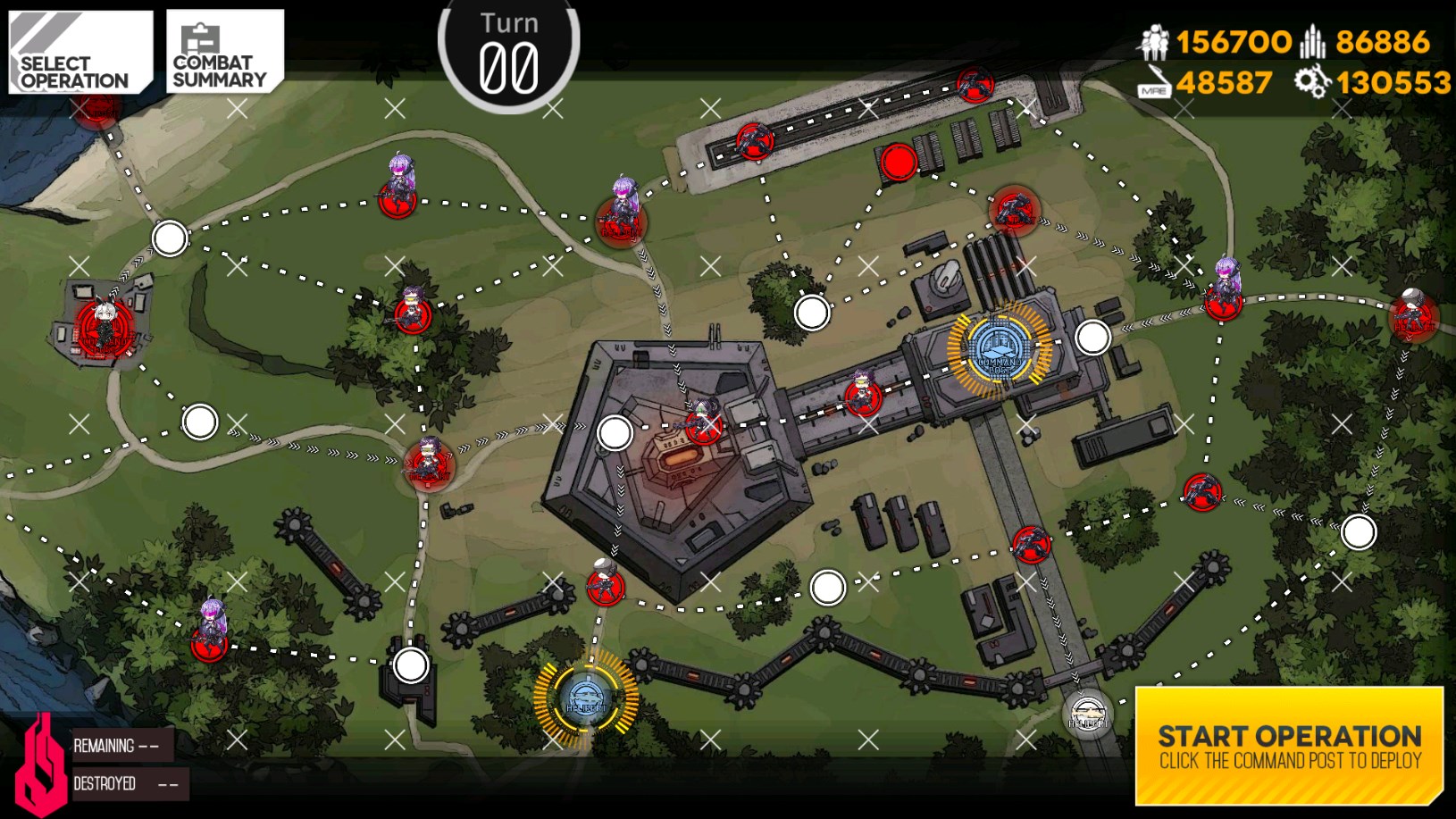 So this map is quite large and the one way paths block a direct route to Elphelt. You're going to need to go all the way around to her while defending your HQ from two sides of attack. Pull your two combat echelons up at the start from the heliport and HQ. As mentioned in the intro, the HQ echelon can quick repair quite easily, so you don't need it to be super strong.

Turn 2 is defending a little, since you set up your defense on turn 1, most of your AP can be used moving towards Elphelt. You'll need to take heliports on the way to sustain your push, however. The best candidate for turn 2 would be the heliport on the far right, as it spawns enemies. You'll be able to take some pressure off your HQ and get supplies from that heliport if you take it. Just be sure your HQ isn't vulnerable, abuse swap to make sure you don't eat up too much AP doing so.

Turn 3 is more of turn 2. Move forwards towards Elphelt while defending. You want to use your second(or third) dummy echelon on the heliport you took last turn, just so you can take another heliport later. You'll likely need more supplies to sustain yourself on the trip to Elphelt. You won't need to take one this turn, but likely the next.

You have two candidates to take, both of which are the heliports that are feeding enemies into your HQ. Preferrably you'll take the one closest to Elphelt, but either works. Just be sure to have your dummy echelon safe, and have them next to the heliport so you take both nodes. This avoids you getting encircled and losing the heliport immediately. After resupplying at a heliport, all you need to do is get to Elphelt.

As for Elphelt herself... She has a few tricks up her sleeve.

Her main attacks are single T-Doll targeted hits, like any other enemy, these will target your frontline. However at around 50% HP, she'll use her skill, Genoise. Genoise is a nuke that deals damage in a cross formation, with most of the damage being in the (orange)middle tile. Try to keep your T-Dolls spread for it, so you don't need to move too much. You also have the option to retreat any T-Dolls you can't move out of it in time. She'll do the skill again at around 10%~25% HP.

Since Elphelt has relatively beefy armour (60), assault rifles will only work if they're overlevelled; same goes for handguns tanking. As such, if you just started the game, your best bet is a mix of SMGs tanking her, while your backrow contains two decent rifles and a buffing HG. At level 90+ you can of course bring whatever you want.

The best way people have found to do this boss on is to use an X formation. This will make it so only one T-Doll will ever be in a dangerous position. After they get targeted, just retreat them.

Elphelt drops the Seithr in this map. Clearing this map 2 times a day is key.