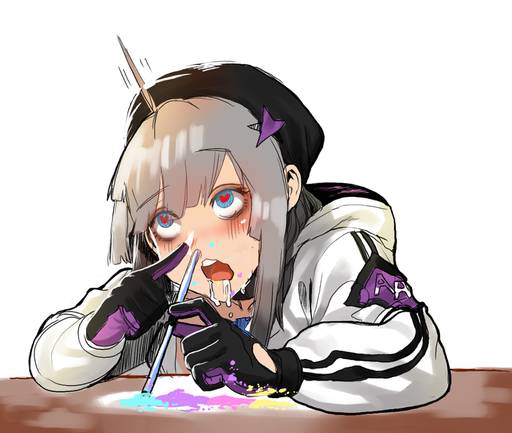 Sometimes, you wonder exactly WHAT goes into T-doll rations when she looks like that, after having the lolipops. Has a severe sugar addiction problem. Very severe. WHAT THE HELL KIND OF ROBOTS IS IOP MAKING!?

Potentially, a really powerful skill held back mainly by the awful initial startup time. On paper, her skill blows USAS away. In practice, a fight won't last long enough for it to matter outside of ranking fights. When it does come up though, it's immensely powerful for what it does, letting her pour knockback shots at enemies. Armor is alright (middle of the road for shotguns) and is carried by decent stats. Mostly "a better SPAS-12". Her aura buff is quite nice but makes you wish the tiles went a bit further.

Most shotgun skills are gimped by their 8s Initial cooldowns. AA-12's skill does not trigger in most MG fights which you plan to bring MGs (unless if you are playing for 2 salvo runs), and while 80% ROF sounds nice in paper, 50% brings AA-12 to the 60 ROF that SG caps at, and the extra ammo doesn't come up unless if the fight goes over 12 seconds.

Assuming she gets her skill up at exactly 8s after she reloads, 60 ROF means that she fires a shot every 0.83 seconds. Since she has 5 ammo at base, she needs 4.16 seconds to get all of her original shots out, which means that the extra ammo is only relevant after 12 seconds, and she needs 8.33 more seconds to fire all 10 shots.

Still, extra knockback chance + no reload means that she can quite reliably keep some enemies back, which can be helpful. Still not 100% though, so your mileage may vary.