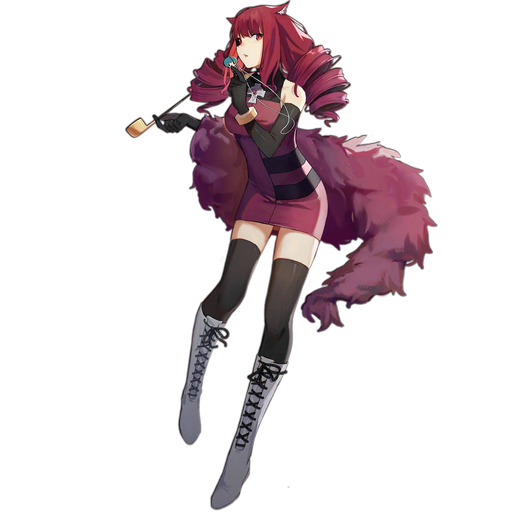 She has very weird mechanics. I want to say something witty but that's really how it works. The most immediately noticeable thing is that her damage is actually cut in half and she fires twice. This seems odd but no, its not just a visual thing either, and both shots actually can end up on different targets. The first shot uses normal RF targeting, while the other has real time targeting to always shoot the farthest target. Vs heavily armoured (enough that AP rounds wont go all the way through) or high HP enemies, this can be bad. Or it can be excellent at trash clear.

Also note that because she shoots twice, it only takes half as many firing cycles as it says on the skill to get stacks, as she gets 2 stacks per cycle (1 per shot). It also has interactions with Sei and Jill that are in the detailed page.

She also works pretty well with Python+Berrycano, due to the way their skills work. This will be covered in more detail when EN actually has Python.

If you run Sei in the same team, her shots ALSO count towards stacks for Stella's passive, which increases the uptime a fair bit. The problem is that Sei and Stella don't work exceedingly well together (they work, but whether its really the best setup is arguable). Bleeding Janes also reduce how many stacks are needed to proc, but this typycally takes a couple of seconds (between 7 and 8 seconds if Jill is in range of a rifle's CD reduction) to kick in and only works for the duration of it.

Overall, the passive is best thought of as a bonus that comes up sometimes rather than a thing to build around, though with her equipment giving more +crit damage than a normal cape, it can actually do a surprising amount of damage if it does kick in.

Enemy link protection is one reason why her double shot is relevant.

Considering that EN does not have the super strong dolls, Stella will be one of the more usable dolls until future events. Stella has one massive weakness, such that if she does not have enough AP to pierce an enemy's armor, her attacks will be affected by armor twice. Stella is not a good unit agaisnt enemies with 135 or more armor (195 or more once EN gets the AP rebalancing), and those enemies do occasionally pop up.

Additionally, in terms of pure base stats (with equipment because that is part of her specialties), she has 18 less FP than Lee Enfield, while only sporting a 2 ROF and 6 ACC advantage. Even G28 beats her with 2 FP and 1 ROF. The difference isn't large, though, and she has a base 180 crit damage over 175 (not very significant), and her gimmicks can make her better in some situations. It just means that outside of her gimmicks, she really isn't that much better than Lee and G28 (and Wa2k, SVD, and perhaps M14).

You can't have all the good without the bad, unfortunately.

Her additional crit damage passive is also hard to quantify as a straight DPS boost. The reason for that is that the bonus requires 8 attacks first, then applies only at the 9th attack. She gets a different "average" DPS boost when a fight lasts 2 attacks shorter, perhaps between 17 and 19.

My point is, it is very hard to quantify that, so just do as Xecty says and think of it as a random bonus rather than thinking of it when choosing/using the unit.

Still a relatively good unit, though, if her gimmicks don't make her bad in the fights you bring her to.