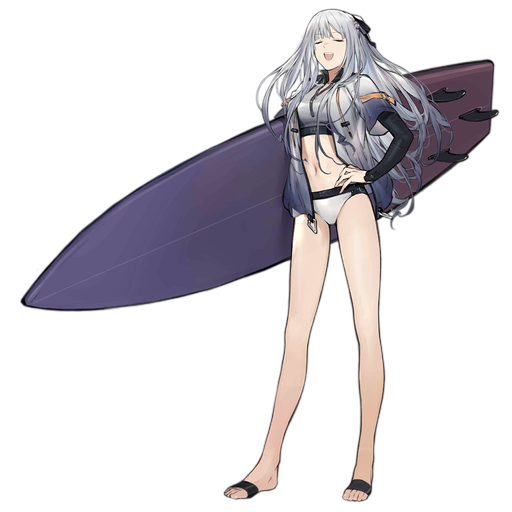 AN94's counterpart, she sits in the 1 position and has in theory, similar DPS. In practice, she's actually slightly worse off due to lacking a passive, but in longer fights this isn't an issue and her excellent uptime lets her outperform most other selfbuffing ARs.

Her skill doesnt seem great, but the sheer number of things it buffs is actually fairly significant and far more powerful than you might think. She can cap RoF with minor buffs, and she can get close to critcap even without external buffs. The rest is just yet more gravy. Hell, you can buff her enough she can take down hydras (not recommended, but its possible) and there's not too many ARs who are meant to take the 1 position. The main reason she's used less often is because AR-15Mod exists and generally takes her spot since AN94 takes the other one (making her yet ANOTHER Kalashnikov product cockblocked by the MIGHT OF EUGENE STONER.)

On 1 hand, she's technically the least used DEFY member. On the other hand, that's a bit like saying "the weakest among the Greek Demigods." It might be true, but she's still really good. That she wants the 1 slot in a formation generally makes her easy to fit into most teams where you arent running AN94+AR15 (she actually pairs well with G36Mod for example.)

Korea calls her Miley, due to if you read it on a Korean keyboard, you get miley. This has been a thing since Alliance of Valiant Arms (which is... pretty popular in KR) so it was an obvious name to come along. That she looks like someone that name is suited for helps too.

35% FP and 35% ROF makes her equal or better than most generics, but she gets 35% ACC And Crit rate on top on it too. ACC is a stat that is hard to quantify, but having more of it reduces the effect of RNG, which is always better. The crit buff may sometimes be wasted, since you still want crit rate on all the other ARs you bring along, which when added to her own buff, would often partially waste her own crit buff. Although getting 100% crit also reduces the effect of RNG and link protection screwing you over.

Unlike other generic self-buff ARs, though, her skill has a 6s ICD, which means that she has to play catch up for a bit, although her potent buff will likely allow her to catch up before her skill ends in 5 seconds. Such a difference is also inconsequential in longer fights.

The price of having such a potent skill and stupidly high stats, I suppose. She has 6 more FP and 1 extra ROF compared to G41, and did I mention she has 62 ACC? Yeah, apparently we needed that too. With her own skill, she would have 83.7 ACC, not counting fairies. However, do note that 6s ICD is kinda long against Scout + DPS enemy lineups, which means that she only has her base to work with in most cases, which is still really high for an AR.