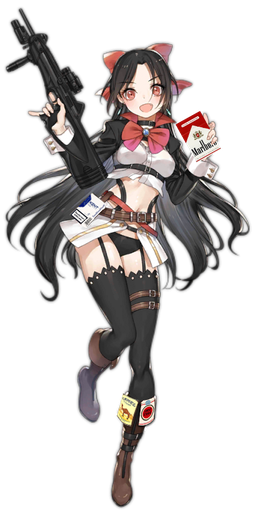 She seems to have forgotten her skirt or pants, and has a very interesting discussion with SOPMOD about the nature of dolls. She also likes collecting cigarette packs.

There is a reason I'd rather be talking about her setting details than her performance. In the story, she mentions she's actually part of a logistics unit instead of a combat unit, and you can see why.

Her stats are middle of the road, and the skill is actually fairly unremarkable. Uptime is worse than than Suomi or MP7, while also giving worse final numbers. Combine with not impressive HP, middling tiles and the fairly easy availability of better SMGs, and you can see why keeping her in your own logi teams is probably doing her a favour.

Not only is her evasion worse than Suomi's, she also manages to have worse DPS than virtually every other SMG. You'd think her accuracy buff would at least make her not shit as DPS off tank, but no.

Has better uptime and evasion than RO, but with less HP and no damage debuff she's ultimately still worse at tanking than RO, while also having lower DPS (seriously, she just sucks at doing damage) and much worse tiles.