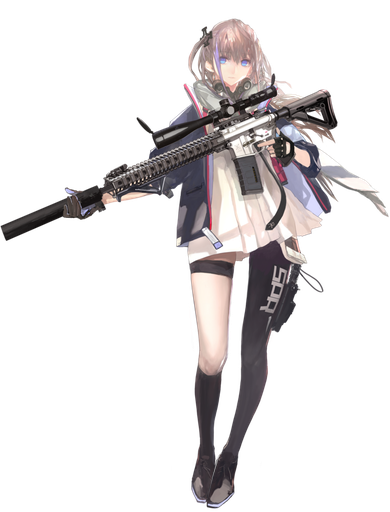 AKA ST AR-15, aka Star-chan. High stats, 2 accessory slots, plus Unique Ammo that blows regular HVs out of the water.

Can and will match/outperform most 5 star ARs. Can get close to RoF-cap on her own and basically caps with pretty much any RoF-boost buff. Can easily cap crit. MOD3 makes her even more hilarious with that.

Doesn't actually reach 116 ROF (12 frames per attack, or maximum effective ROF) with her own skill, which means that ROF still can give her some benefit (10% gives exactly 116 ROF, which RO635 gives). Unless if you don't use an EOT, which then you only need 5% ROF for 116.

Until the October 2018 update, effective RoF cap was at 108 / 13 fpa. She doesn't hit that one either. On the plus side, only Pepesha's 5% RoF buff is too weak to make her hit the cap when running with an EOTech.

And she's still, somehow, a semi-auto only rifle. Fuck the ATF.