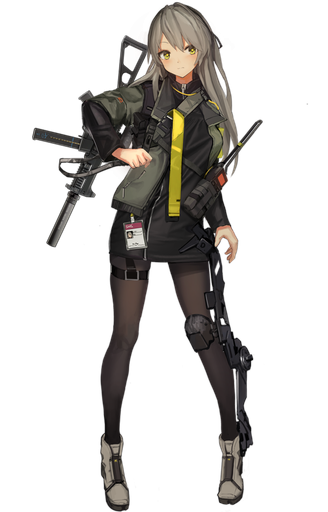 And probably the one that's going to give me a fucking heart attack. Yes, her skill has big numbers. Biiiiig nuuuuuuumbers. Now get your dick off your phone screen and start using your brain:

In a proper tanking role, her buff tiles are literally useless: 500% crit buff x 5% SMG base crit rate = 30% crit rate if you aren't running a suppressor or a crit scope, and if you are using those, your SMGs will have shit-tier accuracy even if you stack reasonable amounts of buffs on them. At the same time you're losing out on AR buffs, which will extremely cripple your DPS. You're better off bringing C-MS or RO635 to buff your back line instead. Even Suomi can buff her evasion up faster than UMP40 could ever hope to.

If she does use her active skill, it'll similarly take incredibly long for her to really ramp up her damage skill – at 18+ seconds to get her damage above 2* ARs, she competes with Negev for the title of "slowest stacking skill in the game", and SR-3MP consistently out-DPSes her even without any buffs. With the UMPs' exclusive equip. Without, her damage output is even worse.

You can build some silly 5 SMG meme echelons around her that sometimes don't totally suck, but unless you know what you're doing, you should put her on cafe duty.