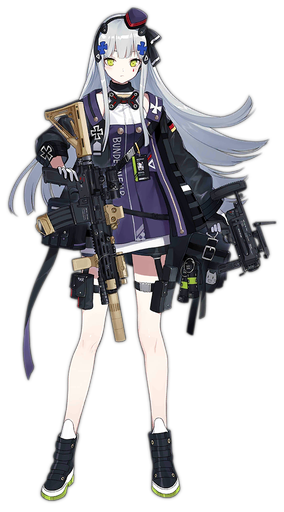 It's a shame she has voice lines now, since the best part about her mod was shutting up her annoying voice. But alas, you'll probably be hearing it, because unlike her basically not-worth-the-effort base form, this one is actually decent. The big change is the six second ICD, which lets her fire grenades within the lifetime of many fights in a meaningful way, unlike most other grenadiers.

The grenade itself is buffed somewhat, and the ICD also makes her a bit more stable than SOP for some fights (SOP retains the problem of "You need the enemy to still be worth hitting with grenades 8 seconds in"). Overall, decent grenadier that you'll likely use a fair bit for farming and events, helped by 416 playing a big role in a lot of event maps and thus getting stat buffed.

Oh, and get her equip when you can. it isn't stellar, but it beats the hell out of a frame that doesn't contribute to DPS.

Her previous iteration can be found at this page