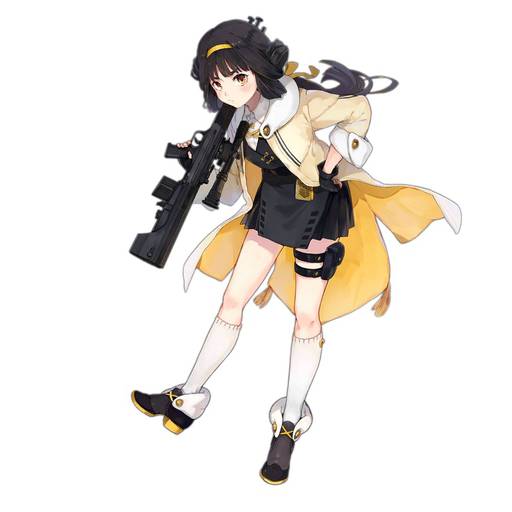 Imoko's much less loved daughter, because at some point she apparently adopted a Kongou class Battlecruiser. Unlike G36 who gets more costumes than any 2 dolls combined, QBU has had all of... 1.

Performancewise, she joined the weird rifle pile by being another theoretically good on paper weapon that has issues in practical field use. Basically, every few times she fires at an enemy, she causes an explosion with a 1.5 unit radius, and when she pops her active, she hits for less than a normal small bamboo's worth of damage and then causes an explosion on top.

The bamboo skill adjustment was a boon for her, since EN will never have to deal with her dumb 8s original cooldown and can now fire it off at 4s, making her usable as an anti-medium-scale unit, kinda handy vs paradeus, but otherwise not exceptional.

Was actually handy in Shattered Connexion, but kind of questionable before then. YMMV.

Note that her explosion hits targets equal to the target's links (like grenades). This means that if the target has only 1 link after being attacked 3 times the explosion will only do 1 hit.

This makes the explosion part of her skill pretty weak as she needs to hit a target a few times to get that explosion but when it happens the target would likely have already lost links.

That said the explosion does not replace her standard attack, so she doesnt actually lose any DPS. It's more that 'her bonus is probably weaker than you think it would be'.