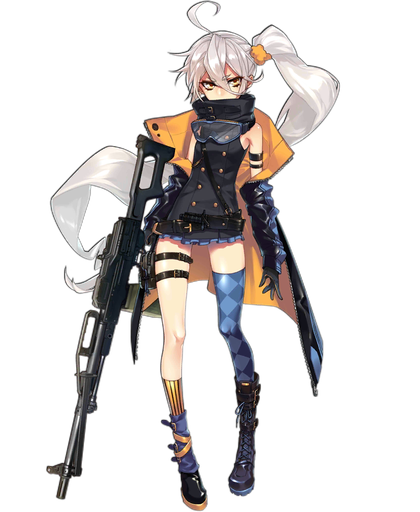 Along with MG5, the last word on general use MGs until digimind evolution. Chance to fire an extra shot with every shot, and that has extra damage and can crit (it's not an autocrit, but can crit, see notes). At lvl10, it's actually very steady. Absolutely mandatory for 100% of teams that want to make it to the absolute top ranks of datasim.

This document will basically be about. “Why PKP is OP and you’re a bloody idiot if you don’t raise her” because even among the Big 3 (PKP, PK, MG5) she kicks the other two in the dust.

Her in game skill description says: “Chance to fire an extra shot with every shot, and that extra shot autocrits.” This is true and wrong at the same time. The 20% at SL10 is also wrong.

Funny isn’t it, anyway. Here are some interesting aspects for her.

Therefore, at 1 link, she has a very low damage boost compared to PK or MG5 but at 5 links she has an expected DPS of 60% compared to their 50%.

Her base accuracy is also acceptably high (31) allowing her to use Opticals (crit scopes) instead of Eotechs. Here, due to the reasons of her skill being able to crit and the existence of K5 and Fairies, it makes more sense to boost her accuracy using those sources instead of her own equipment.

This came on Reddit like a year ago, but for funsies (and if you’re an Ultimate Lucksack) PKP’s theoretical max damage per 1 volley (without any exterior buffs) is as follows:

Compared to this, PK (Because MG5 is weaker than PK)’s theoretical max damage per 1 volley (without any exterior buffs) is as follows:

This stupid looking equasion is only possible because PKP’s skill fires an ADDITIONAL bullet that is NOT from the 15 bullets. Therefore, in theory, she’s the only MG (Well, there is MG3 but we don’t speak about that) that can legitimately fire up to 30 rounds depending on how much of a lucksack you are.

The only drawback that exists on PKP is likely, “She doesn’t buff armor on her buff tiles.”