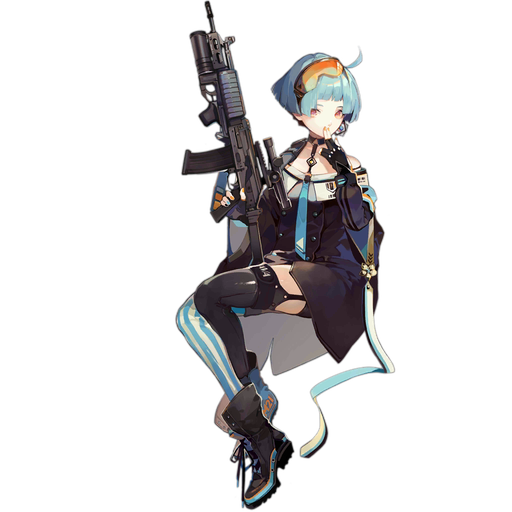 Another grenadier that's not useless. Her grenade fires after just 4 seconds, making it actually matter, and either makes hit enemies take 115% damage for 3 seconds (3 or more hits) or buff her own damage by 60% for 8 seconds.

The self-buff is not too useful, giving her damage output comparable to G41/FNC, but since she hits with a wide blanket, it's fairly likely she will instead trigger the debuff which, while not particularly useful on EN RIGHT NOW (due to weaker enemies), becomes increasingly valuable later on when enemies gain ever more health, and letting your other units deal bonus damage ends up being really useful.

Additionally she shines at corpse dragging, allowing you to corpse drag four units for the cost of supplying one unlinked(!) AR on certain maps. For that alone, you'll want to keep two of them with lvl60 stats, preferably at 1 link.

Zas is most often known for her corpse dragging power, but she's pretty good on normal mobbing / bosses than a lot of people believe. Though yes it's true that EN has no such content which makes Zas truly shine, Zas' grenade synergizes with grenade SMGs, self-buff SMGs, grenade ARs, self buff AR, (this is literally ALL of the possible combat combinations for Zas) and by herself as well. It also immensely helps out the tank. Let me give some examples.

Therefore, if G41 is a univeral self-buff AR, Zas is a universal grenadier. Her evaluation is actually becoming better than G41 (unless you happened to get G41's exclusive equipment from CT Rankings, and even so, her debuff is invaluable and can be placed in Pos 1 without losing efficiency) in CNKRTW for her versatile performance regardless of whatever echelon she is placed in to.

If you decide to not use manual skill casting (because it's easy to forget), she doesn't synergize too well with grenade SMGs, as one of the two grenades will reduce the damage of the other grenade. Not always terrible if you run the maths and know that double grenade will kill all enemies off, though.