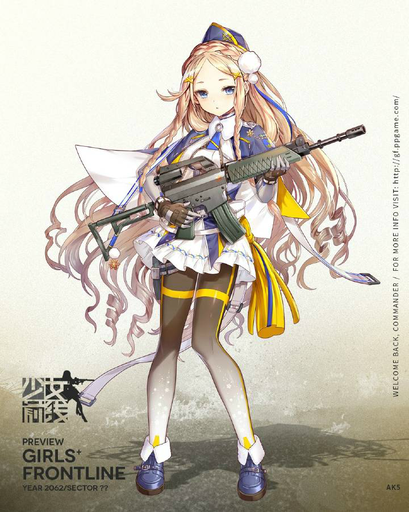 An upgraded version of the FN FNC, both IRL and ingame. Like FNC, her 5/8 skill uptime makes her burstier than the 10/16 of G36, with better stats, which evens out to DPS comparable to G36. Not your first choice for ARs, but solid… if you can be arsed to farm her.

Do note that while AK5 has a worse skill than G36, her better base stats cover any actual difference, allowing them to perform relatively equal up to 15 seconds, which then she surpasses G36. A short reminder here that battles tend not to last very long, which means that Ak5 doesn't really have an edge here.

How is Ak5's skill worse?

Initial cooldown of 5 seconds instead of 4. Same uptime ratio (10/16 vs 5/8). Actually worse FP buff (70% vs 65%). While I understand that it is somewhat intentional and counterbalanced by her good bases, it's weird to see a variation of a skill that is completely weaker in every form at the same rank.

That aside, Ak5 is a decent DPS AR with a few glaring flaws.

And while Ak5 IS better than G36, even if you have decided you want to train a DPS AR, training her might not be the best choice, for 2 reasons.

In the end, if you have thought of all of these and still decide to train her for whatever reason, then she still is definitely a pretty decent DPS AR. Just don't expect her to perform exceptionally.

Also FNC will overtake her if her MOD comes, which can be another downside.