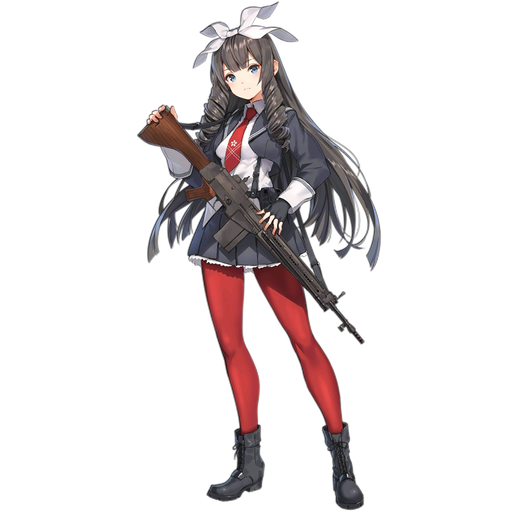 She's a bit of a complicated unit in that certain enemy thresholds alter what her skill does, thus making her work better vs bosses (with her colossal 90% FP boost for a few seconds) than for regular encounters. However, the timings are awkwardly short for the big boost, and the 2nd half reduces her firepower a bunch but also buffs the hell out of the stuff in front (which, if it's SR3, means more damage for her.) Note that the skill is less awkward than it seems, as it counts doll groups, rather than individuals, so 5x 5-linked enemies is totally fine, and so on.

Also, like all units with tilescan buffs, you can futz with getting the buff multiple times by having units at the right spots at the right time (though its a little harder to use as it checks 3s into the skill rather than on skill use). This produces a +140% buff that, while hard to use, a creative commander might find some purpose for. YMMV with that.

While her skill is as stupidly complex as you'd expect from Japan, her stats are solid enough that you can just drop her into any random ARSMG echelon, she'll average out to performance comparable to G41 or TAR-21. It's a bit of a waste, given her sheer potential for dumb shenanigans, but you can figure out those as you go.

Her tile buffs applies on anything on her tiles WHEN she activates that part of her skill, not the units on her tile WHEN the battle starts.

In other words, you can move ARs there to get the buff, making her the ultimate buff AR (giving 55% FP to other ARs if you put them there).

That said, the activation condition for the FP buff is kinda limiting. The only case where you would get that buff while it is relevant is against bosses or certain elites, since in most cases, having 2 or less stacks of enemies means that the battle is pretty much over. That also means that she is one of the strongest DPS units when you want to burst down bosses, though.