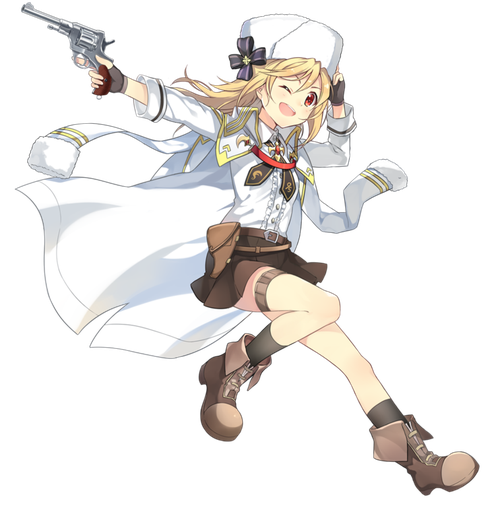 Very good buffs, not good in her own stats though. Skill is blah-ish but serviceable at night. When she gets to MOD3, however. Becomes COMMISSAR NAGANT. May or may not land you in jail (or gulag as the case may be). She does say it herself afterall, about your odd taste...

Has pretty good offensive tiles which are useful for ARSMG echelons. Her skill specifically is pretty decent for both ARSMG and MGSG, impaired slightly only because it's a night exclusive skill. For ARSMG it simply increases the effective HP of your SMGs, and for MGSG it can help reduce the enemy's damage such that your SGs will take 1 damage when you normally wouldn't have. Especially useful at some bosses as she allows your SMG/SG tanks to recieve more hits before losing a dummy.

That being said, you might probably do better on an ARSMG with a buffer AR or HG FP buffer over using Nagant Revolver. Especially at daytime where she is less effective.

When choosing between Nagant Revolver and Glock 17, you usually consider the time of day and tile buff needed for the fight. At night, Nagant Revolver's skill is significantly better and her tiles are more relevant (unless if you need the 30% EVA tiles), whereas at day Glock has more powerful buffs and 64% ACC is pretty decent for MGSG (although her tiles are pretty unusable for ARs).

Just make sure you do the maths and calculate what you gain from using either of them before making the decision.