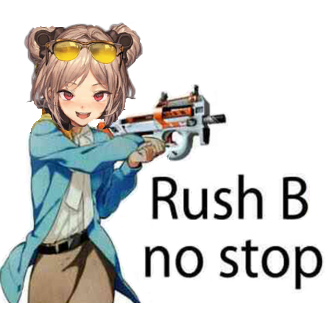 Everyone knows the joke by now. If not, you've been living in a hole for the past 20 years. Now more associated with Russia (who people the gun was specifically meant to shoot at, as it was part of a PDW project that worried about armoured Russian soldiers) than with Belgium (which many people dont seem to realize is a country). Mostly noted on older servers for an utterly ABYSMAL rate which led to drama that resulted in Mica integrating official recipes into the client + promising more common true core masks. Also, surprised people by being drawn by LM7 instead of Suisai, despite being an FN product.

For performance, she's a fairly powerful dodger with a bonus offensive function, and her tiles aren't bad. In terms of sheer survival potential, she's 1 of the best, although occasionally stuff acts weird due to her shadow clones (which btw, interact WEIRDLY with the game). Of note, the shadow clones only copy the number of active remaining links, so you do want to keep as many links intact as possible for that (or not, see detailed notes). Overall, a very strong main tank candidate that is really good at her survival job.

Oh boy this doll has a looot of weird things going for it. First off, the shadow clones cause memory leaks like hell. Enough so that using them noticeably reduces the amount of time your client remains stable if you use her for extended periods (though the client is already leakier than a torpedo'd battleship so you probably wont notice unless you have battles that literally last 20+ minutes. You may want to restart the client every so often though.). Next, though you cant order them to move, the shadow clones DO have a move speed (so that your formation can actually move forward in fights where you have to advance)... the movespeed is stupendously fast, although this doesnt matter because your echelon speed is determined by the slowest unit. Next, yes, the shadowclones DO count as things that Sei can shield. And they have 999 armour so they take 1 damage from almost anything, so this can be hilarious. They do have a limited lifespan though, so you cant keep this up forever. Finally, these are not in fact a bunch of dummy linked units, but all are actually individual units, meaning they get shot 1 at a time (which induces bullet waste) but ALSO makes them immensely vulnerable to AoE attacks.

Oh and yes, her stacks of her dodge thing ARE multiplicative with each other.

As for the hilarious drama, well, I hope you're prepared NOT to get her, because people at NGA found she had a roughly 0.11% Appearance rate from 130,000 samples. Her immensely low drop rate, on top of being 1 of the fastest dolls to go from Introduction->Getting a Skin (15 days from release to skin - behind Zas M21's 14 days), and the drama from the community basically all contributed to why Mica now gives True Core Masks as rewards for events starting with Isomer, and why you now have things like integrated recommended recipes. As far as "Fantasy Species" ('Dolls that people have heard of but drop rates are so low its entirely likely to not have them'), she's among the rarest.

Oh and Mica admitted that yes, some dolls DO have naturally low rates, this is intended. So yeah, enjoy your cryptid hunting.

Ha get fucked older server cucks, EN #1, imagine not getting P90 on your first roll. Cryptid? More like crypt where oldies goes to die.

Apparently unlike the old server releases where the low rate led to immense drama, EN resulted in drama of a different sort with rateup mechanics that were suspected from a previous batch on older servers being applied, making her IMMENSELY common on her rateup days (starting 7th September 2019). So uh... things went rather differently for EN. 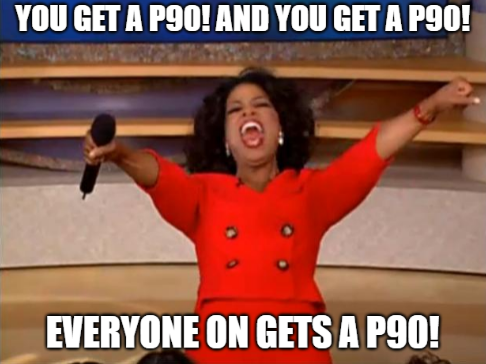 She is likely to be very uncommon normally (that is, in a post rateup environment), but as far as the rateup is concerned, rates are definitely up.