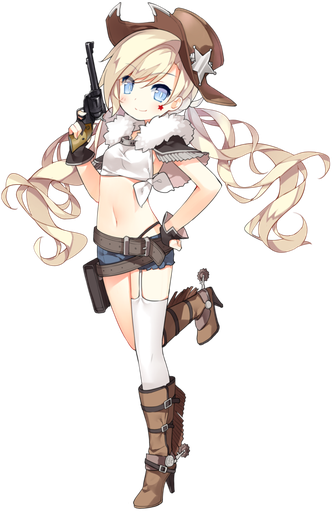 AKA SAA - THIS IS THE BEST GUN EV-cough Actually has very nice buffs and a decent skill. Not bad at all in night battles either with the acc up if you have crappy PEQs.

Her mod makes her a stronger pick, and more info can be found on her mod article.

Pre-MOD, she suffers from the fact that K5 and Grizzly exists.

For most purposes, SAA and K5 are interchangeable with most differences leaning towards K5. AR and RFs can get FP from K5's skill (with the possibility of tile abuse and position 5 usage) and MGs don't care about HG skills, and 10% tile ACC isn't that much of an advantage for SAA. K5 even buffs your MT SMG with +40% EVA.

SAA only wins in the DPS race when DPS SMGs are used in an ARSMG, as K5 cannot buff the DPS SMG from her position (and even if she does, it's not a DPS buff). At the same time, however, if you do a little moving you can give 40% EVA to your OT SMG to improve her survivability. Not to mention, Grizzly beats SAA at this front with her stronger tiles and skill.

SAA suffers from the existence of K5 and Grizzly. If you have both and are duping them, you probably don't even need a single copy of SAA. That being said, if you have neither, SAA is next on the list to train.

Post MOD SAA is really good, though. If you already have a bunch of K5s and Grizzlys, SAA MOD3 would be the prime reason why you will want to train SAA anyways.