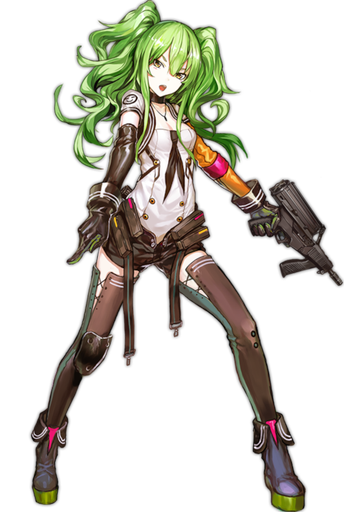 Very good benefits for night battle albeit on a slightly odd shaped aura, but easily workable still. Paired with guns that need a lot of RoF boost like Lee-Enfield a lot. Also allows WA2k to max out her RoF immediately through just their 2 buffs + formation bufftiles. Though largely pointless for MGs, she enables 1 of the most stupidly powerful formations in the game, the IWS-DPS squad.

GREEN IS THE DANG—

Top contender of the 5 position in standard RFHG echelons. Replace her with Five seven or Stechkin if you want to put someone else in position 5, although often that just reduces your DPS (and performance), so make sure you did the calculations for that first.

Top of her line, but you will likely want at least some other units of the same skill class (especially Five seven), due to her fixed tile positions. At the same time, there are no other ROF buffers for that position, which means that if you MUST have someone else at position 4, the only ROF buffer options you have would be her and Astra.

Note that her tiles means that she would be at MT position with her terrible defensive stats. That being said, while she is not an good tank of any form, the other HGs don't really do THAT much better. If you don't know how to kite, start learning, unless if you have fat fingers like me.