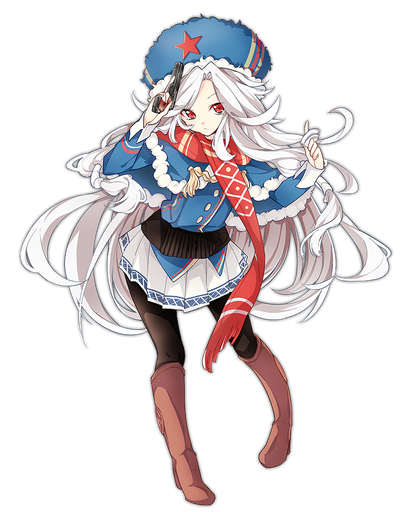 Welrodski! ...By which I mean she's basically Welrod but 3 star, with lower numbers and an aura that wants her in the middle (or front works too). Usable if you lack Welrod and honestly not actually bad, but HG builds are cheap and she's pretty common so she might get annoying to get eventually. Also her -acc skill stacks with Welrod, and can be combined with a +evade skill for silliness.

Equivalent to 56.25% EVA boost, or P99/Tokarev and slightly weaker than P7. Makarov provides the best tiles, though, and can be used at both position 8 and 5 (everyone else can only sit in position 5/4). Do note that the actual impact of EVA buffs is hard to quantify, and varies between fights, enemies and maps.

Often used as a budget/downgrade for Welrod in the standard RFHG echelon. As RF fights tend to last more than 6 seconds (because that's how long it takes for HGs to get online) and RFs target enemies at back first, it usually means that your HGs tend to need to tank something for a short while, so the extra EVA helps that.

Makarov and Welrod are often used because can be used in positions 8 to leave positions 4 and 5 to other buffers, and their buffs are significantly better. P99, Tokarev and P7 all want position 4 (5 is usable for P7), while giving worse stats than Makarov and Welrod.

That being said, she is a straight downgrade of Welrod, so use her only if you don't have Welrod.