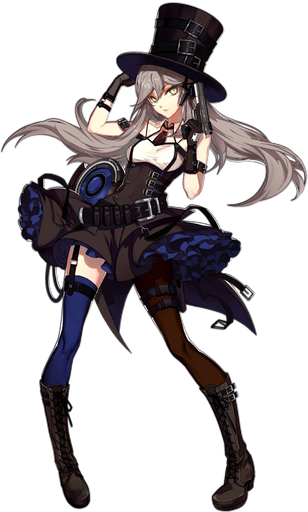 A Britbong copy of Cz-75! ...And kinda weird. She's sort of setup for the 2MG 2SG 1HG thing that doesn't come up much and is defensively oriented, but sometimes it comes up. Just... not on any content currently on EN. Does occasionally see actual use as a result, but she's not going to be your first pick for most jobs.

The problem is that RoF reduction is kinda meh, as while it does reduce enemy DPS, it merely slows down the rate of being shot, as opposed to making shots worse (good for SGs as their armour can more readily absorb it) or less accurate (which helps Eva tanks just not be damaged entirely), making it the weakest of the enemy attack stat debuffs.

In theory, ROF debuffers are good at some things.

Essentially it's just not a very good tool for most situations.

That being said, specifically for Spitfire, theoretically, with MGSG lineups, if the battle will last more than 6 seconds even with a FP buffer, using her for the ROF reduction (so that your SGs take less hits overall) might be a decent choice (if the enemy is already doing 1s). However, unlike a FP buffer, a ROF debuffer is less versatile.

She might be useful, but you probably won't lose sleep not having her. Also NZ75 does her role better other than NZ75's tiles.

And MP446 MOD3 would be better than Spitfire (except for general use MGSG) too, when she is a thing.